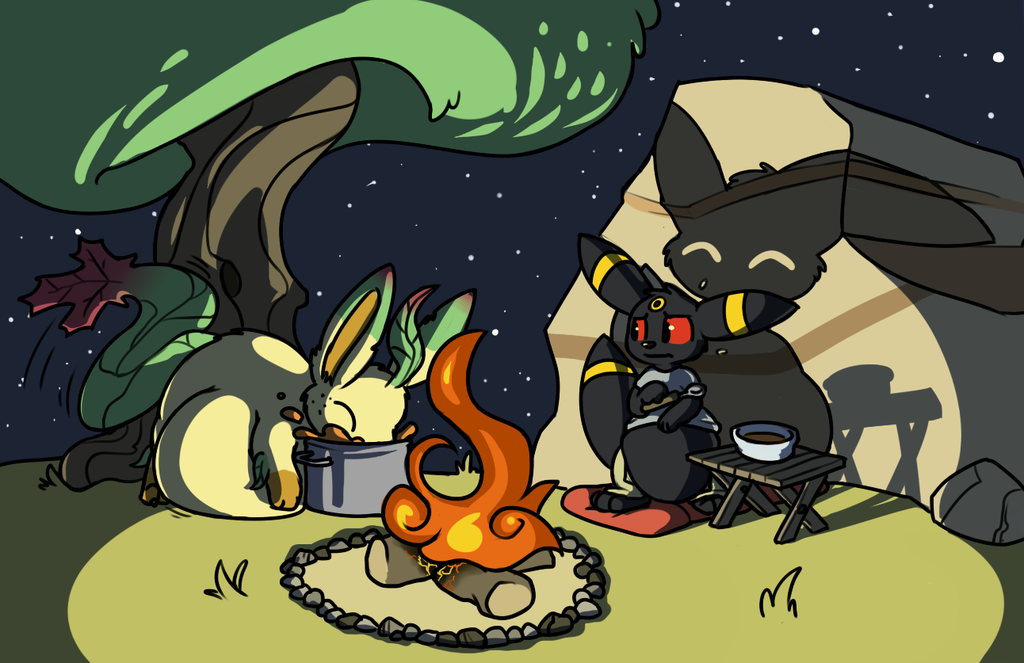 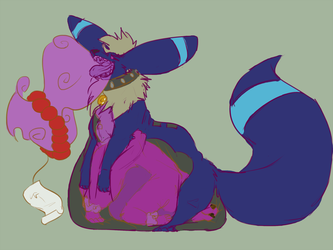 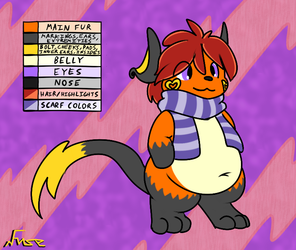 Aspen had quite the trouble re-integrating into human society after the hiking adventure that had left the nature-loving human transformed almost entirely into a tubby Leafeon. At least he had the fortune of retaining his two-legged movement and human speech, since his transformation had been halted a bit early. It was difficult to convince everyone of who he was back at home, but slowly he regained much of his old life...even though his new form, and new instincts, still made life a lot trickier than it used to be.

The Leafeon never thought he'd have somebody to relate to in his unique situation, but a fortuitous meeting one day changed that. Walking down a main street one day, he happened upon a Umbreon dressed - much like himself - in proper clothing. The Umbreon clearly was feral, stuck to four legs when walking, but would sit up as human-like as possible whenever stopping. Both Pokemon seemed quite surprised at the other as Aspen approached, and struck up conversation.

Though shy and very reserved, the Umbreon revealed his identity over time: Arc, a human who was being haunted by the spirit of an Umbreon, known as Veil. This 'specter Umbreon' was linked to poor Arc, possessing his shadow, altering his body, and giving him desires to eat and fatten that were not his own. An interesting case indeed; Aspen shared that last curse, though he doubted it was because he was possessed...at least, in the ghostly sort of way.

The two found a friendship rather easily, given their shared misfortune. Perhaps ironically, they often met over lunch, and often at a local buffet - with both always leaving with bigger bellies than they'd hoped to obtain. Still, the company of a relatable friend made it always worth it.

But one day, Aspen - still working his nature jobs as always - had to go out for a nice, relaxed hike in a national forest to check on the status of some meters around the park for a couple days. It was easy work, and he knew all the Pokemon around there were weaker, more docile sorts, it being a more-groomed, less-wild area for the sake of visitors. So it seemed like a great opportunity to invite Arc to get out and enjoy the woods with him. Arc wasn't the most adventurous sort, but for the sake of the exercise, he agreed to accompany his leafy friend.

It was a good partnership. Feral as he was, Arc still did a great job setting up sleeping bags and gathering wood and rocks for a campfire while Aspen wandered about to do his job. By nightfall Aspen returned to a completed camp, and a blazing fire; something he was glad he didn't have to light himself this time, given his typing! Arc even seemed happier than usual, clearly proud of himself. But...the two had both worked hard that day, and their soft bellies were a-rumbling something fierce! Fortunately Aspen had packed a delicious home-made stew, hearty and flavorful and packed with nutrition - perfect for a couple of active Pokemon. The blazing fire simmered the large pot of food rather quickly, wafting up an assortment of meaty and savory smells into the air...and before long their meal was ready.

Of course, relatable friends as they were, there was some rather large differences between the two ex-humans...

Arc had set up a folding table next to his sleeping bag as the stew had cooked, and with Aspen's help he poured himself a big bowl of the meal, setting it carefully on his table. The Umbreon, who had somewhat mastered using utensils with his feral paws, clasped a shiny spoon, and began to enjoy his meal with dainty sips and chews.

Aspen, on the other paw, visibly drooled over the dinner as he served his friend. His leafy tail slapped against the grassy ground energetically as his friend enjoyed one bowl, then elected to get a second...waiting all the while. After making absolutely sure the Umbreon would be full on two servings, though...the Leafeon carefully drug the pot out of the fire, letting it cool on the ground for a minute...before plopping down to all fours and plunging his snout into the stew! His fat belly jiggled elatedly as he slurped, chomped, and gulped down mouthful after mouthful of the delicious recipe! His creamy face-fur stained brown with the broth, but he simply lapped at his plump cheeks between breaths...but otherwise happily-drowning himself in the deliciousness! His belly soon sagged heavily to the grass, plumping out past both of his sides and only giving him a better cushion as he drove his snout deeper and deeper into the emptying pot...

Arc flinched a bit, watching his friend eat like - this! It was more unbridled and voracious than the grass-type ever ate in public... Goodness, it was...quite the show. ...Veil seemed to like it, of course, making the Arc roll his eyes as he felt the same emotion due to his link to the scepter. He didn't want to be fat, but his shadowy double always 'encouraged' it...argh. So dumb.

Still...the Umbreon now wondered if he should've asked for thirds and fourths before this...

This was a really awesome commission! The artist is the ever-amazing   geckomania, who definitely captured both (or all three, depending on how you view them) characters wonderfully. I got this with   Masonc1, who is the owner of Arc and Veil (termed Arcveil collectively), while I own Aspen. :3

I really am fond of humans getting turned into fatty Pokemon, and Mason is much the same way, so it seemed natural that these characters of ours would meet! If you wanna learn more about Arcveil, go check him out on Mason's page here, here, and here.

It is interesting though. Both were unwilling to become Pokemon, and both aren't willing to become super-fat but have another force (Arc's shadow Veil, and the sap in Aspen's belly) saying otherwise. But Aspen is a lot more easy-going and willing to give into the eating urges, even if the resulting weight embarrasses him almost as much as it embarrasses Arc. Perhaps it's his being a Pokemon researcher and hiker to begin with, but Aspen is alright with being a Pokemon - to some extent, anyways - since it helps him with his research to be 'in the element' like that. Arc, on the other paw, wants to hold onto every bit of humanity no matter how difficult it is, and finds (practically?) no value in being a Pokemon.

Different as they are though, they still have a lot in common, and maybe things to teach each other. Who knows? Maybe we'll even see them in another picture together someday, if Mason also likes the idea. :3