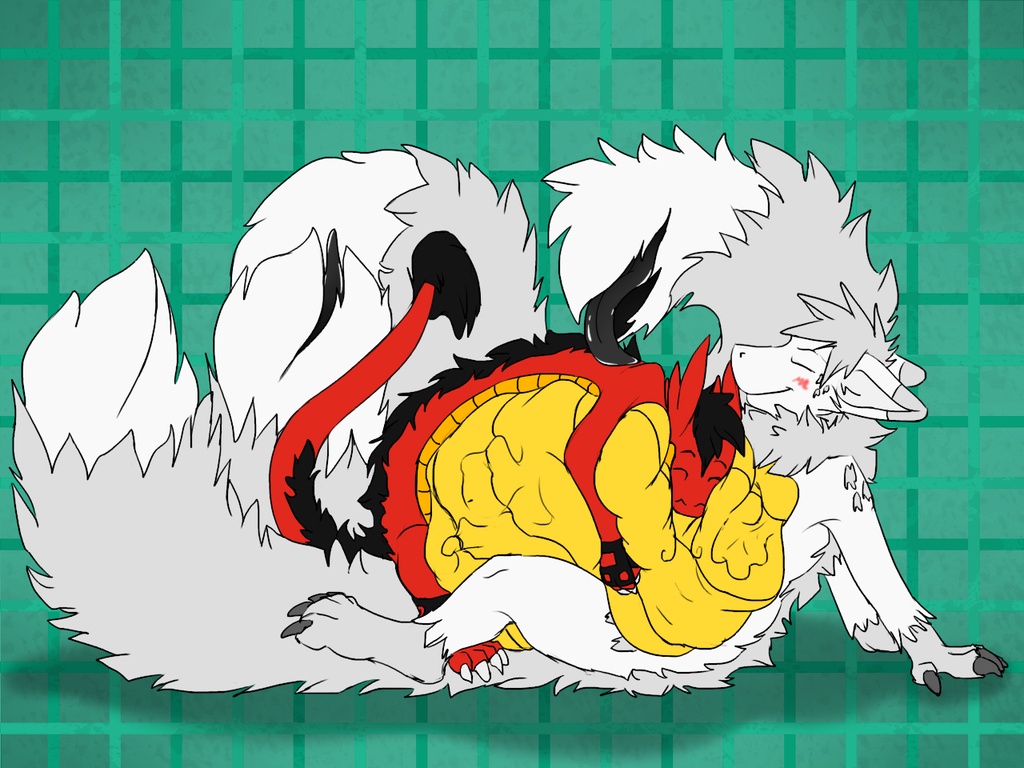 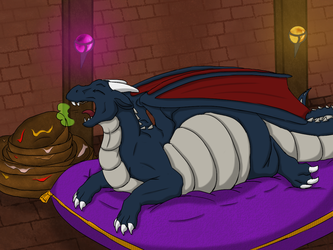 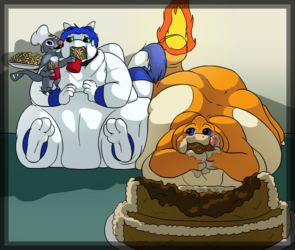 Kitsunes are magical and powerful creatures, quite crafty and more capable than you might expect. But those who think they all appear in a foxy form of some sort may prove gravely uneducated...

Korynn didn't mind this much, though. Those ignorant over how he, normally an ordinary Srothar, could remove his collar and take on a much more potent and many-tailed form proved to be some of the easiest meals to capture, after all. It was even better when such people were in groups, since each of his fluffy tails held their own maws, tongues and throats...and each could be just as hungry as he could be. ;3

Drax the dragon didn't fear his own encounter with the Srotharsune, however. The eastern drake was mighty fond of such a powerful predator, and Korynn quickly found the the red little scaly was a wonderful errand-boy for meal retrieval. Drax was quite earnest with his job, feeding each and every one of the 'sune's tail-maws several delectable and squirmy snacks apiece!

His belly soon well-engorged and wobbling with the myriad of moving creatures inside of it, Korynn laid back for a bit of a rest. His servant seemed to want to rest atop his mass, and the kitsune obliged this...for now.

Drax relaxed quickly under the massage of the prey just behind those soft stomach walls, closing his eyes contentedly...and being quite unaware that the predator was not, in fact, full...

This was another collaborative commission that I worked on with   imperfectflame! :3 The usual process was used; Flame did lines, I spruced the lines up, then colored and did all the rest. The commissioner this time around was   slimedragon1995, aka Drax, the red dragon in this picture. ;3 He wanted to be paired up with   Korynn - here in his special Srotharsune form - with much delightful vorish bulginess to be had!

Naturally, this was a totally fun thing to put together. ^..^ It was very complex - kitsunes are tedious to color, and I'm sure it was a bit tricky for Flame to draw too - but I think it all came out rather wonderfully. <3 Tested some new texture tricks with the background here, and I dig the subtle 'rain on a window' effect I created; somehow, it just works. 83 Also, this is the first thing I think I've worked on that featured tailmaws - I had some entertainment applying some subtle shading to the big open maws, as well as tossing a bit of shiny-goodness down. :3

Thanks to Drax and Kor for the awesome commission, and I'm really glad you guys enjoyed the end result! n.n

(And if you're all wondering why my story ended on a cliffhanger of sorts...well, Drax intends to commission a part 2 to this scene at some point, so I figured I'd leave the story open-ended. ;3)