How to Properly Stuff an Umbreon: Part 16 - by IF by Charem 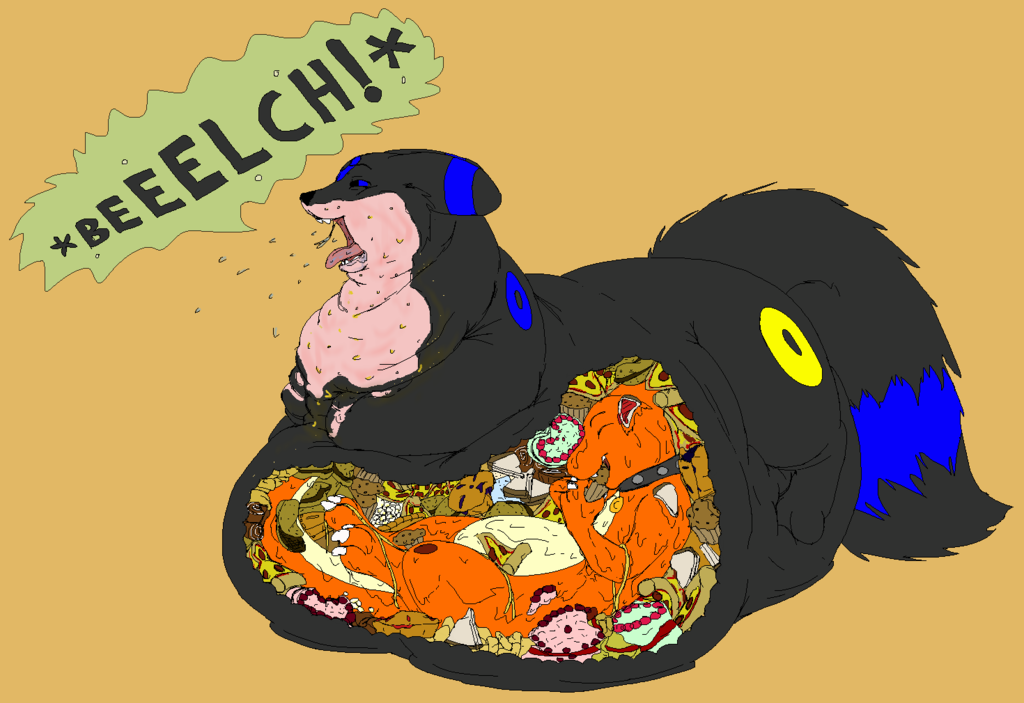 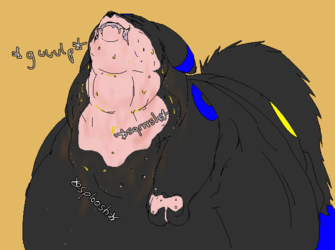 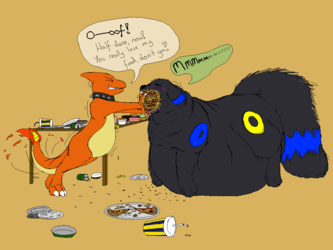 How to Properly Stuff an Umbreon: Part 16 - by IF

Flame siiiiiighed as his meal settled down into his belly, watching his gut shift and shake as the rather-active food found its place amongst the more stationary meals. But, all the squishings and shiftings finally heightened a certain pressure... A pressure that had been building since that first bite of cake, so long ago. The Umbreon grinned, parting his jaws one last time, and...

"BEEELCH!" The fattened Pokemon stretched his snout wide open, bits of food and drool flicking out as he shouted out a long, HARD belch! Had this been 'so long ago', he would have never fathomed doing even a quiet burp. 'How rude of me!' he would have thought. But now? He was engorged, fat, and extremely happy to show his approval of his blubbery state! There was no shame in him, not in a single fattened bone in his body.

That last of shame was shared, of course, by the 'foodmeleon'. Charem was entirely happy to be in the situation he was in - in the ROLE he was in. It was a good role, being food for such a wonderful creature like an Umbreon. <3 Of course, even food needed food at times... And the Charmeleon had quite the busy, active day. His stomach rumbled, almost ironically considering his situation. He didn't want to eat any of his own food before, as it would have robbed Flame of that food. But now that he was 'imprisoned' in the 'bree's gut with it all...

The Umbreon eep'd as he heard a myriad of munchings and smackings from within his belly...and grinned as he realized the cause. Silly Char-food! Flame collected his belly-girth in his thick paws, giving it - and all that food - a snug. He was happy to 'share', given the situation...and given how thankful he was to the reptile. This meal was, simply, the best and largest meal he'd ever eaten!

...Only, one question remained in the Umbreon's mind.

What was for dessert? :D~

Lastly...just in case somebody wants more-collected versions... Here is a link to this series, put to 3 comic pages: http://imageshack.us/g/220/imperfec.....imperfect.png/ (Both messy and clean versions are included too. ;3)