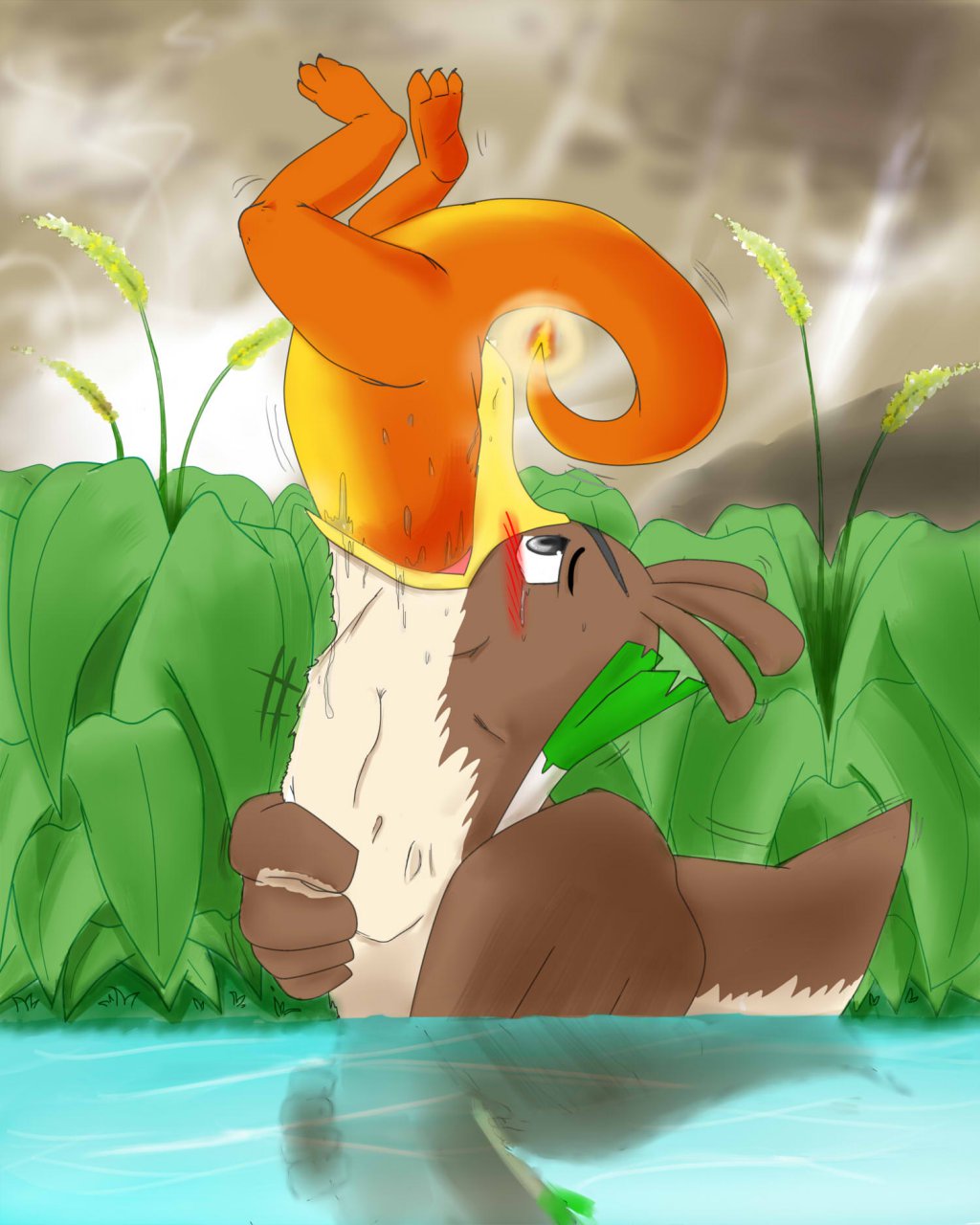 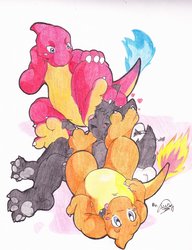 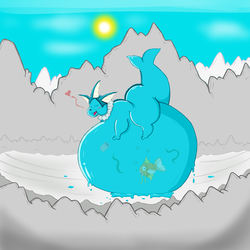 The tall grass rustled from the movement of the creature that hid amongst the thicket. A tail flicked upward like the scope of a submarine that popped out of the water to search for enemy ships. Its flame danced on the tail tip as the tail wagged back and forth. It swam through the sea of brush as its owner came to the very edge. An orange snout poked out from the grass and sniffed around.

Huge whiffs entered the nostrils and a smile appeared across its face. Soon the face of a Charmeleon came out fully into view. He was no ordinary Charmeleon though; compared to most Charmeleons in the Pokémon world, he was shorter than his kin and also a bit tubbier. He was not shy of it though, far from it. In fact, his vorish nature was the reason for his flab. He did not care what kind of creature it was; to him, it was dinner.

Charem was his name, and being a predator was his game.

“Ooooh,” he thought as he looked at the edge of the tall grass. It came out to a small river bank near the far woods. The smile never left his lips as he looked down the south side. “I knew my nose smelled something delicious.” His tongue flicked out and licked his lips. The reptile saw his next meal, a Farfetch’d. The brown duck Pokémon rested on the opposite side of the river with its bill buried behind itself and held its onion stalk like a solider with a rifle.

The bird was an easy target indeed; it should not take any effort to swallow it whole. Charem moved back into the brush and snuck around closer. He treaded carefully as not to disturb anything that could warn the Farfetch’d of his location. He would carefully press his paw down to find twigs or any dry grass that would crack or rattle around.

It did not take long till he could almost grab the bird. The Pokémon just continued to snooze and float in the water.

“Almost there,” Charem thought as he prepared to pounce. He could see the front of the Farfetch’d; that tasty bird shivered a bit and its wings began to spread outward. Charem worried it was about to wake up.

“NOW!” he shouted as he pounced full force toward the bird. However, he did not see ahead what had happened as he felt himself trapped inside the bill of Farfetch’d. With a loud yelp, Charem struggled as the bill remained tightly closed on his upper body.

The Farfetch’d awoke immediately as he felt the large reptile writhe in its bill. He only had woken up to stretch and yawn, only to find a scared, yet tasty Charmeleon. The duck was only use to veggies for his meals, but, this reptile was really delicious. The reptile struggled more as he felt the tongue of the bird slipped around every inch of the his chest.

“HEY!” Charem continued to wiggle around as he hopped to get free, “S…STOP THAT!” he yelled as the tongue now moved lower and soon he felt himself start to pull downward. He felt his head and shoulders press in tighter as the throat muscles started to ripple. Each wave pulled him down further; the Fartfetch’d reached up with his onion stalk to press it against the Charmeleon’s underside. With the right leverage, he forced the reptile faster down his esophagus. His throat stretched out with the big meal and left an impression of a head that vanished into the stomach of the duck. Farfetch’d kept its head back to allow a straight passage to its gullet.

Charem’s feet kicked around in the air, he did not realize yet his fate was sealed. The duck Pokémon felt its lungs begin to beg for oxygen, so he needed to end this quickly. With a pull back of his stalk, he whacked the underside well enough to push Charem further down. His thighs were now pressed together from the throat walls. Farfetch’d’s belly felt strained by the stretchiness of its new meal. It puffed out under the water; it almost caused the duck to roll backward on its surface. It was only a few more gulps before the tail tip was left.

Farfetch’d was worried about if it would be too hot for him to handle, but he was not afraid of a little heat for his meal. One large gulp later had put the Charmeleon inside of the duck Pokémon. With a soft moan, he rubbed over his swollen stomach. The reptile writhed inside the belly. He felt as though fate has turned on him. The predator had become the prey, because of one mistake. It would not be long before the duck would be just as fat as the Charmeleon. Maybe even take over his vorish nature...

This was something I requested of   Makimagister back in the day. :3 The request took a while, but it was well-worth the wait! I love the style and background for this.

I've always been fond of Farfetch'ds, right up to having such a leek-toting bird as my main Pokemon in my copy of Pokemon White. Sure, competitively-speaking, Farfetch'd has always been a rather poor choice; a bad moveset, badly-balanced stats (especially for a Flying-type), no evolutions, and even the games basically mention them as being food as their most notable trait. Yet, even being a fella who normally never uses Flying-types in the first place and doesn't even care for birdies in general, I found interest in the plucky leek-birds, and they are easily my favorite bird Pokemon. (My Farfetch'd in White isn't really that bad, functioning as a speedy and powerful glass cannon.)

So, it's not really a surprise that I wanted to be eaten by the oft-looked-down-upon Farfetch'd. n..n It seems very appropriate that the bird gets a little time in the limelight, and as a predator too! <3