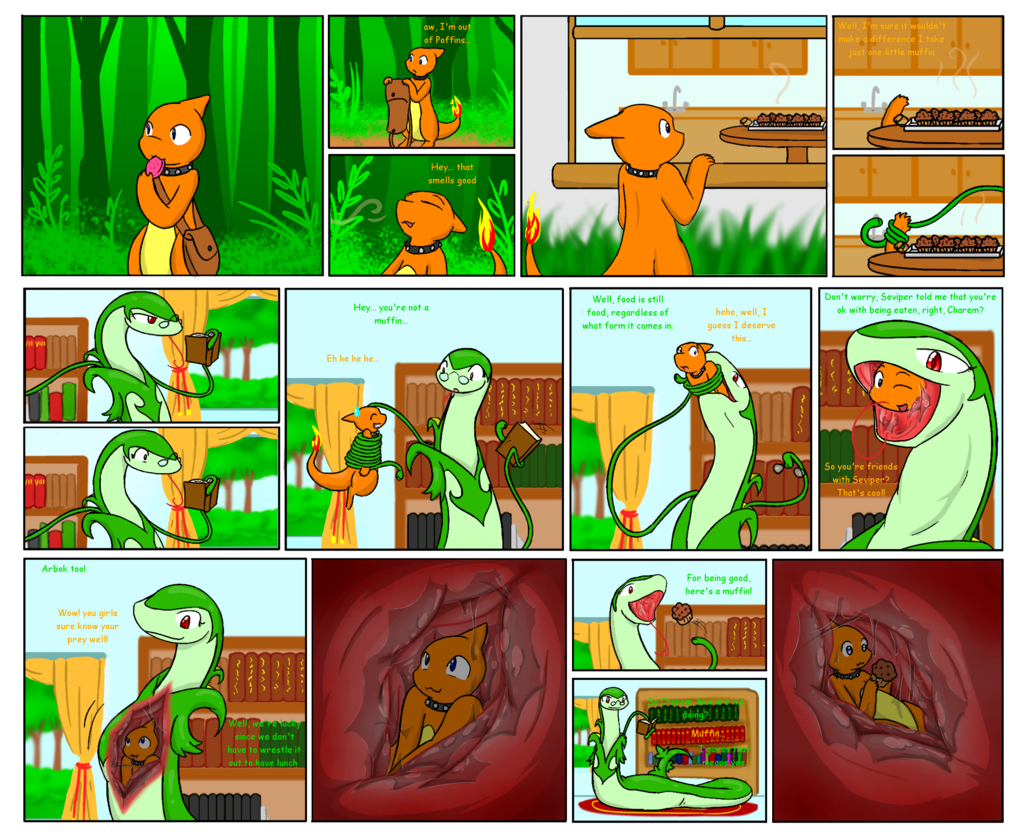 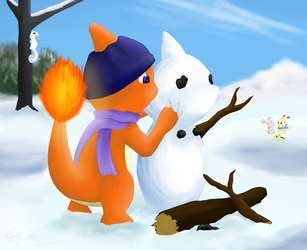 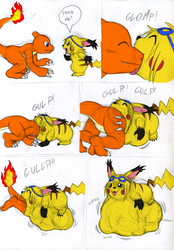 (This image is the final in a 'trilogy' of me meeting A's Pokesnakes. See 'A Spicy Forest Snack' for the first, and 'Shut Up, We're Not Friends.' for the second!

(Refresh for full-size image. Having trouble reading the description? Remember, you can also click the image to small-size it, and thus read the description much easier.)

My explorations of Unova had taken me all around the interesting region, but I soon faced a problem when I realized my pack was much too light. You can't go travelling without something to eat after all, and it seemed I had burned through my supply of poffins much faster than I meant to! (What can I say; I'm a glutton!)

Fortunately, I noticed a town was nearby: Cross Roads Town, read a sign. It wasn't a large place, but where there's people, there's food! I didn't exactly have any money, but who could resist a Charmeleon begging and whining cutely, after all?

It didn't take me long to smell a delicious aroma as I padded through the peaceful town. My nose led me to large manor, and more specifically, to an open kitchen window...and goodness me! Muffins! There was a whole plate of fresh, hot, tasty muffins, obviously set near the window to cool... But Charmeleons, being fire-types, like nothing more than food immediately from the oven. n..n We don't need to wait for things to cool, after all!

But this raised a problem. I could go around to the home's front door, knock, wag my tail and beg for a muffin, and likely get one... But it'd be significantly cooler by then! Though it's almost a given that the people living here would give me a muffin...after all, they had so many! Hmm...

I snuck through the window, my claws quietly clacking against the tiled kitchen floor. There wouldn't be a problem with nabbing just one, right now... After all, they'd most certainly give me one anyways, I'm just taking one a little earlier...and...without their knowledge. Not a big deal at all, really?

Well, that's certainly what I thought until I felt the vine coil around my wrist.

Drawn smoothly into a study room, quite coiled in the grassy appendage by the time I got there, I soon found a snake - a Serperior, to be precise - reading a book... Her confusion in finding me instead of a muffin left me with few words and a blush on my face... But, she didn't seem mad, at least. She seemed...willing to substitute muffin for Char. O..O; How...flexible.

This situation seemed familiar though...as I squirmed my lower body in that plush, sizable snake-maw. The deja vu was quickly explained by Serperior, who in fact knew me quite well...she was friends with Arbok AND Seviper, two snake-gals who had found me a tasty meal before! n..n; Well ain't that just a coincidence... It seemed the girls had said nice things about their Charmeleon-meal, which was perhaps why Serperior wasn't upset with me...and was so quick to nom me!

But, I admit, I didn't mind. x3 These Pokesnakes had always treated me extremely well for just being their little prey...and it never gets boring to rest in such plush, gooey bellies. I settled down with a grin, my only regret being that I had never actually nabbed a muffi-

"For being good, here's a muffin!" remarked Serperior suddenly. I felt her toss something, then heard a casual 'guuuulp' echo above me, before a muffin quite literally dropped into my lap, intact and glistening with a bit of drool! Transfixedly I stared at it and sniffed it, letting my mouth water fully before I took take my first bite into the muffiny goodness... "Muffin..." I chirped cutely, my happiness quite obvious...

Eaten by three snakes, treated nicely in their plush bellies, and ending up with a muffin at the end of my third 'trip'? Yup...life was good! ^__^

Bwehehe! <3   livinlovindude did - as usual - a fantastic job drawing this comic. livin seriously spoils me; this is the third comic featuring one of his character A's Pokesnakes going teh noms of me -- and in such adorable circumstances and with such detailed internals, as always! ^__^ livin can really turn my cuteness up to 11 like few other artists can...props to ya, man!

livin has also basically converted me into being a fan of Arbok, Seviper, and Serperior through the three comics. I normally don't like snakes all that much, but he gave each of his such wonderful personalities (and digestive systems!) that I can't help but grow fond of them all. n..n Certainly helps that livin's so awesome at panel direction and timing, making it so that his delightful stories are told perfectly through the context of each picture. <3

Thank you so very much livin! ^__^ No matter how many times I read these, I get a smile put on my face every time. <3

(For the other two parts of this 'trilogy', check out the links at the top of this description!)