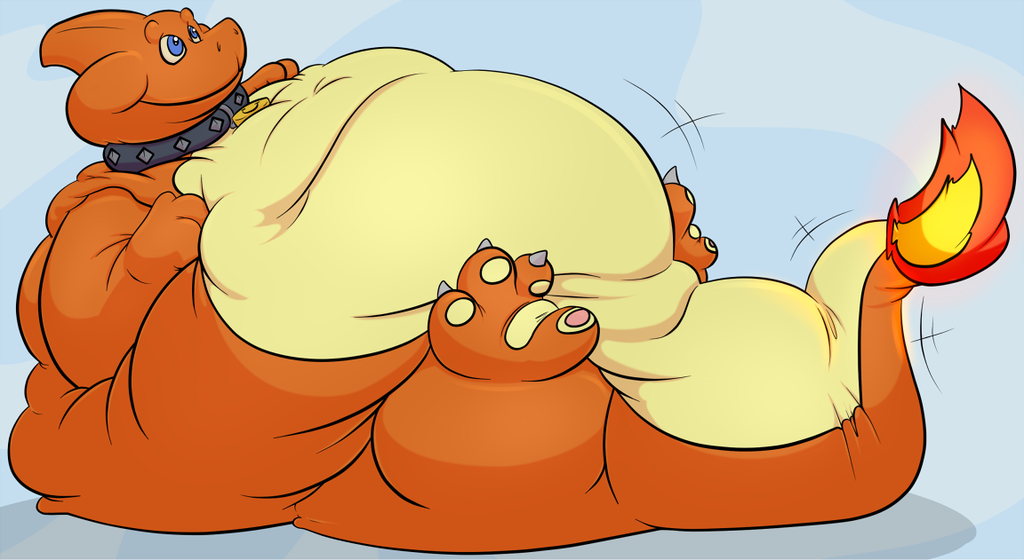 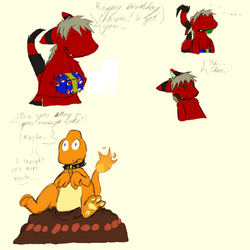 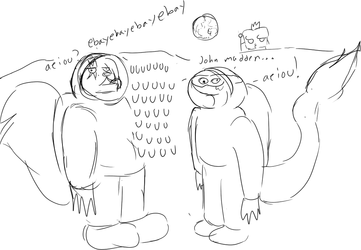 (Story was written by the talented :iconWisty:!)

"...And that concludes our tour of the Happy Snacktime Pudding Factory! If you have aaaaany questions at all, please feel free to ask either myself, or leave a comment in the gift shop feedback box! Now, if you'd all care to follow me, we'll..."

Charem couldn't focus any longer. The rich chocolate-y scent of the puddings and custards filled his snout, butting his mind with the thoughts of the rich creamy pudding flowing across his tongue. It was torturous walking this factory tour on a catwalk barely three feet above the pudding's surface - a velvety butterscotch with a rich creamy amber color!

"Maybe just a bite wouldn't hurt..." he murmured to himself while he whipped his head quickly in either direction. The next group wasn't due for another hour or so, and his current group was swarming around the guide - a handsome wolf named Fenrique or something - so he had a clear shot at just getting a paw into the creamy goop. Taking a deep breath, he braced himself with his tail, wrapping it around the iron guide rail of the catwalk as he slowly leaned forward. He could see the surface of the pudding rippling gelatinously as he breathed from the exertion, extending his talons. He was so close! He drooled a little, his heart racing as he could just imagine the sweet, smooth-textured pudding in his mouth! It was going to be so deliciously sweet, especially since it would be flawlessly undiscovered...! His claws breached the pudding's surface, spreading the thick goo easily.

"HEY! Get away from there!"

The sound the wolf's voice, so loud and threatening, shocked the Charmeleon; his heart jumped into his throat, beating loudly as he lost his grip on the rail. It felt as if time was moving in slow motion: he could see the blurs of colors as people, specifically the guide, rushing to "help" him, the hands grasping at his slick, burning tail fire, only to let go moments later... the view of the pudding rushing up to greet him, then quickly engulfing him with a wet, sticky slurp.

The Pokemon kept his eyes tightly closed, not wanting to get the delicious goop in them. His mouth opened quickly, and the first satisfying drops of pudding rushed into his maw, coating his sensitive taste buds with the cream and rich flavor. His heart jumped a little as he remembered the guide's words from earlier in the tour. We only use the finest, densest lard in our puddings to assure a thick, rich texture and flavor! He was now eating that pudding, feeling the calories rushing into his maw.

Due to his buoyancy, he floated just below the surface, every gulp of pudding giving him a gasp of air... he couldn't quit eating unless he wanted to drown in such the insatiably-delicious goop - not that that would necessarily be a bad fate in his eyes! Determined to stay afloat, he quickly began to gulp and swallow the pudding quite ravenously, each mouthful easily packing away a gallon or two into the char's nearly bottomless gut. He grinned and reached down, rubbing his filling belly quickly...

That is, until he felt it. His belly jiggled and wobbled a little, his overactive metabolism starting to decompose the carbs inside of the sugar, storing them on the char's body as loose fatty deposits to make room for more stuff in his stomach - one didn't become an eating machine by becoming full quickly! His scales began to stretch and expand to accommodate the pounds of extra calories, his tail warming the pudding as it reached his mouth. Soon, he stopped struggling and flailing, instead focusing his energy on rubbing his ever-swelling (and sensitive!) stomach, giggling cutely to himself as his talons tickled at the rolls of flesh. He waded around in the vat nearly fifteen minutes into the feeding frenzy, now able to hear the voices of the crowd above him. His tail had touched the bottom!

"That was a fifty-thousand gallon tank!"

"I can't believe he's eaten that much!"

Charem blinked as his head soon breached the surface and remained above it now... But there was still so much butterscotch around his jiggling mass! He groaned laboriously as he leaned down, swinging his massive arms lazily through the sticky pudding, lifting what seemed like buckets of the delicious treat into his maw, each goopy bite as flavorful as the last. He crooned happily as he could now open his eyes, noticing the walls of the vat looming above him, uncomfortably close to his body. Wriggling slowly, his rippling body jiggling and swaying with the motion, he looked at himself. He was beautifully enormous, and was still growing! His body seemed to jiggle non-stop, inflating with each swallow as more pounds were packed onto his body as rolls of delightful fat.

As he continued to eat, he heard a creaking noise, a pained groaning of iron and plastic... he stopped for a minute to listen, his body growing ever bigger... Suddenly a CRASH! reverberated throughout the room as the sides of the tank flowered outwards, letting his cramped mass spill out completely...as well as the last bits of pudding that the Char couldn't reach. He groaned and huffed, wriggling and jiggling as he futilely tried to reach the pudding, but it was no use... He lay there for a few more minutes, waving his chubby arms at the spectators above, blushing cutely as he was bombarded with questions.

His blue eyes sparkled playfully as he responded to most everyone with a single, only semi-honest phrase: "I just wanted a bite!"

A matter of moments later, he felt a blast of cold wetness on his body, the sticky Charmeleon being sprayed down with water, blasting away the remaining bits of pudding... Well, it looked like he'd not get to eat that later. With a sheepish smile, he looked up to all of the guides and guests above him, waving and laughing as his sensitive, fleshy rolls were tickled with water.

The cleaning finished, the Pokemon laid back, wriggling and waggling his thickened tail about, his massive belly oozing about. What a wonderful day...!

Though...there was one thing missing...

Wahhh, I looove this sooo much! <3 This delightful image was created by :iconBlue: as part of a very affordable commission deal he offered a while back. ^..^ Now, Blue's always been amazing drawin' fatfurs, but one image in particular made me really adore his style... This one: http://www.furaffinity.net/view/6176310/ I loved how the fat was just so loose and soft in that image, and it made me desire a similar 'composition' of chub for myself. n..n Happily and obviously, Blue was quite kind to oblige!

My love of fatfurs that's developed over the years is quite simple to explain. More pudge = more to love, and it also means more belly and tail and etc that can be rubbed as well! <3

Also, much thanks goes to :iconWisty: for writing a very fun story. ^..^ The pudding and factory setting was all his idea; I didn't really have a plot besides 'fatty Pokemon is fatty', so I'm quite appreciative that he formed a quite delicious story! ^^