One Way to Utilize a Tail Vent - by LustBubbles by Charem 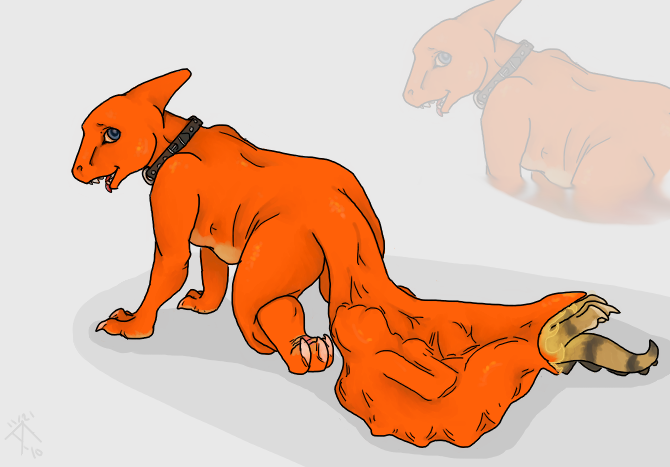 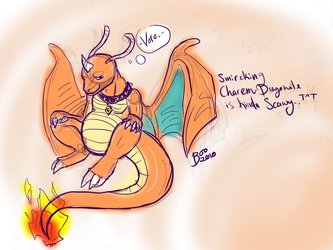 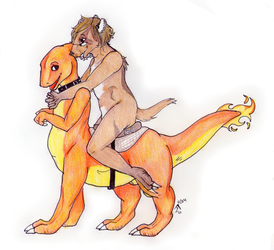 One Way to Utilize a Tail Vent - by LustBubbles

My tailtip twitched as I attempted to wag my tail, though the extra weight inside of it allowed me barely any option except to drag it on the ground. Tail vore? It was odd, but I had somehow managed it... A Warubil, a bit shorter than me, had managed to open up my often-ignored tailvent and work his way into the uber-tight passage, with time and effort... The sensation was incomprehensible as the desert crocodile squirmed about, and yet it felt all too wonderful, like a massage in a place where you didn't know you needed it!

My tailflame, its 'core' actually stored within my vent, flickered and tickled around the Warubil harmlessly, exploring his tannish scales in a seemingly curious manner. My fire would not harm him; I was keeping the temperature down by choice. His feet would be nice and toasty by my flame licking over his paws...

But soon, perhaps, he would be completely immersed in my thick tail, and moving further into my vent... Could I manage it, this strange new way to 'consume'? I focused, carefully using my 'wagging' muscles to experiment in flexing my muscles inward... Yeah, I'd get him in, just as soon as I got used to this!

Hoo boy. ^.^ Where to begin? This is tail vore, if it isn't obvious by now. Drawn by   LustBubbles, who did a spectacular job drawing my tailvent to the specifications I described to her. In particular, I like how it is possible to see my spine/tailbone above the bulging.

I can't say tail vore has ever been a huge interest for me, but I'm always for branching out a bit. And since my survey has garnered a surprisingly high number of tail vore supporters (49 of 85 survey-takers marked it as something they'd like to see me involved in), I figured it was about time to embark on my first tail vore picture -- with LB's awesome help, of course. :3

But now, the science behind it all. How can I tail vore when I've never alluded to having the ability before? Well, now I can explain some details most people don't know about me.

As a Charmeleon, I have a flame on the end of my tail, obviously. But the statement is sort of misleading; the flame is actually IN the end of my tail. There is actually a thin vent that runs from the tip of my tail to the base of my neck; it runs parallel to and just below my spine/tailbones. The tailflame's 'core' is actually housed shallowly in the vent, for several reasons. For one, it gives the flame a lot more resilience, since it can't truly be extinguished unless something doused it thoroughly within the vent.

For two, the flame and the vent make up what is basically a 'third lung' for my body. Besides two ordinary lungs located in my chest, the tailvent also acts as a sort of lung in combination with the flame. Fire absorbs oxygen to fuel itself, and my tailflame does the same from the outside air... However, not all the oxygen is consumed by the flame; the excess is channeled into my vent. This oxygen sifts through the entire length of the tunnel and is directly absorbed into my bloodstream via the walls of the passage. Since the vent runs just under the spine, it is very close to a lot of internal organs and can quickly supply oxygen to them if needed.

A reverse process can also occur to preserve the flame. If the flame is cut off from outside oxygen, it can borrow oxygen from my bloodstream via the vent walls to sustain itself.

Tail vore, then... Well, the tail vent normally doesn't stretch; this is a bit of a liberty I'm taking in attempting tail vore. As far as blocking the vent with a 'meal' goes, this isn't as dangerous as it would be to, say, inhale something into my main lungs. The flame/vent act as an auxiliary lung and work differently than normal lungs, so a blockage in the passage would be strange but not uncomfortable. In fact, my tail is equipped with many more nerves, muscles, and blood vessels than an ordinary tail is, so it is actually quite pleasurable to have something squirming about inside of the tailvent. ^//^

I'm new at this though, so as is obvious from the pic, I'm not exactly sure how to 'nom' with my tail yet. Once I get the hang of it though, that Warubil could technically be pulled centrally into my body, since the vent runs to the base of my neck; it would almost look as if I had put him in my gut. :P However, the Warubil would never be harmed in my vent - it's only meant to absorb or supply oxygen, and cannot break down or digest something inside of it.

Anyways, hope the 60% of you that voted for tail vore like this! ;3 And I hope those of you who didn't might possibly enjoy it too. I'm definitely interested to hear comments/opinions about this pic~