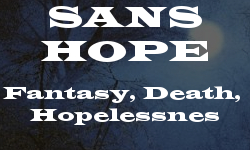 This is a story about a hero, who has given her all to save the world but to no avail. Only a few more steps through a tiny mountain path, and she’ll arrive at the villains alter upon which he has sacrificed the world. The End Of Everything approaches and there is nothing to avoid it…

Each step was a struggle. Hildegard, the Hero of Five Realms, could see the darkened sun, eclipsed by the Moon, only a blood-red corona over a black dot in the sky, the dancing shadows looking like tentacles, grabbing at the very fabric of existence. For all she knew, this might be how it is.

She was tired. The past weeks were full of constant and unending running. She did not find the artifacts that could have protected the realms from unraveling as Ailwin, her nemesis, started his cursed ritual. Now she had to flee from the nothingness the world became, slowly creeping towards the Dread Altar at the end of this path.

Once she had friends, family, a home. All were taken by the void now, died in the pursuit of a heroic plan to save the world. Or unable to flee the nothingness. Hildegard couldn’t mourn them, there was just no time. She was alone. She might not even be able to kill Ailwin and bring some justice into the world, for what was justice to a dying world?

The last corner. A few more steps and there Hildegard could see Ailwin, floating above the Altar, chanting and channeling his arcane power to pull the darkness between worlds upon the land.
“Ah, the hero comes to slay the villain!”, the sorcerers voice echoed between the mountain walls. “But aren’t you a bit too late now, hmm?”
Hildegard drew her sword… and stuck it into the ground. “Oh, not that much fight in you? Tell me, hero, did you even plan at some point to strike me down? Or did you realize from the beginning that you were just a worthless glorified meathead, barely good to wipe out one meager demonic invasion? I mean… conquering hell, that was one of my first To Dos and look here I am… TEARING THIS WORLD APART!”
Blue lightning brightened the sky as he channeled more magical energy. The world rumbled. Ailwin turned away from the Altar, towards Hildegard.
“Well?”

She could barely draw a breath. Exhaustion was taking its toll. His words lashing at her soul harder than any magical spell ever could. It was true, wasn’t it? She never had a chance. She could barely look up to look him in the eyes, just a tiny sign of defiance. What for? There were no history books to write anymore that could give a symbolic act of resistance some power. The world would end, and she didn’t do anything about it. “It’s true. I knew from the beginning… somehow… you’d end the world. But I kept fighting..!”
A boisterous laughter erupted from the Herald of Eclipse. “And for WHAT?! Nothing! Just like me!” He rose to the sky. “Look how the world unravels, how it dwindles into nothingness! The fire will die, you will draw your last breath and only I will remain, the god of what lies beyond the downfall!”
Another rumble. The altar cracked open in the middle and a pillar of fire erupted towards the eclipse. Hildegard could feel her heart growing colder. This was the lifeforce of existence, she was sure of it. Just… pushed out into the nothingness.
“That for? Just to be a god of nothing? Or something? A gamble? You don’t even know…?” Hildegard couldn’t hide the pain in her voice. Each breath, she saw the faces. Her parents, her lovers, the friends she made, even some villains she defeated. Gone for a roll of the dice?

Ailwin floated closer, his grin growing wider. “I don’t even know. I am the most powerful sorcerer this world has ever seen. And I grew bored with all your meaningless lives. Watching, toiling. As if it would mean anything after you died. Don’t act like you would have made a difference, hero. For me, this is the last great experiment. For you, it’s the end. And I am glad you are here because I enjoy telling you so much! Do you feel it becoming colder? You must be freezing by now.”

And she was. The sword was the last thing that kept her up. Her sword. Blade of Daylight. She used to be able to invoke its power by saying the magic phrase “For the Glory of Light!”. Many evil creatures were vanquished by its edge. She tried using it now, but without the sun, there was no daylight. The blade was useless as her wielder felt. And now the coldness of the dying world crept in. The pillar of fire being the only thing warming her a bit. But in her back and in her bones, she felt it. She felt life itself seeping out of her. She looked back towards the path she came from. Slowly, the earth and rocks and plants faded away. Into nothing. Hildegard moved towards the pillar.
“Yes, get some warmth, as long as it lasts!” Ailwin cackled.

As she reached the summit, the pillar was almost gone, only the last few trickles of lifeforce. Tiny orange sparks flying through the air, steadily towards the eclipse. “Ah, poor hero. Couldn’t even get some warmth in the end… guess you are now the only thing bringing warmth into this world. Aside from me, of course, haha.” He dropped to the ground. “Anyway, I’m going to kill you now. Any last words?”

Hildegard looked into the sorcerers gloating smile, up to the eclipse and back at him. She gripped her sword and sighed. Then she whispered: “For the Doom of Ailwin.” before she swung the blade towards the Herald.
“And what good is that going to do?! The sword is…. inert… what?” Searing pain in his shoulder as Ailwin stumbled to the left. He looked down and saw the Blade of Daylight lodged firm into his shoulder, emanating magical energy. Hildegard pulled the sword out then turned with an angry yell, hacking away at the sorcerers head until his arm and head were torn off. No clean cut. No battle cry. Only crying and yelling as the Herald of Eclipse life was extinguished.

When Hildegard felt done, she let the sword drop, stick in the corpse of her nemesis. Collapsing against one of the altars stones, next to the crack the pillar made in the ground, she cried. It was over. Done. Now nothing would come after the end. No god. No her. No friends or her family.

It became darker. A lone spark of fire was blown over to her, and she caught it in her hands. A tiny source of warmth for her fading body…

I wanted to try my hand at another dark fic when i had a bout of depression.

I am not super happy with how it came out but i think it's still a nice story to read. You got to make a few things that aren't 100% satisfying to make to get to the good stuff!