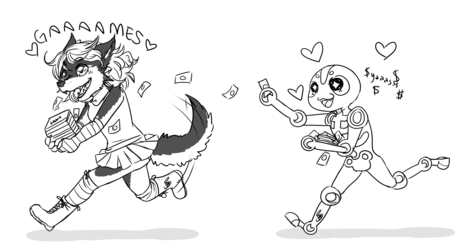 Life moves pretty fast. If you don't stop and look around once in a while, you could miss it. -Ferris Bueller's Day Off

Hey there! I'm Celes, nice to meet you~ I recently came out as transgender, male to female. While I'm only at the start of my journey in real life, online at least I prefer to be referred to as female. Someday I hope to take hormones and have surgery done, but that's a loooong ways off yet. x_x In the meantime, drop me a line! I'm pretty friendly and always happy to meet new people! ^-^

Once in a blue moon I like to livestream myself playing games, but I gotta get my TwitchTV settings fixed. :B

I'm also looking into doing a little crafting with fabrics, but I don't even know where to start yet. ^///^ If you've got sewing experience n' such, hit me up~

My first journal, and it's a meme. :B

Had my account on here for a while, being a lurker n' such, but never made a journal entry, so why not start it off with a meme everyone's been doing? :B

What's your real name?
My given name is Donley, but I'm going to eventually get it legally changed to Celes as I continue down my path.
(Please don't use my given name, I was debating on if I was even going to put it here or not. >_> )

What's your orientation?
I'm still having to wrap my brain around the fact that since I'm going to be female, I have to call myself straight pretty much. |D

Are you single, taken or undecided?
In an open relationship with my wonderful Retsueto~<3

What do you do in your spare time?
Gaming and web browsing mostly these days, I'm a boring fuck. :B

What's your job or occupation?
Stuck at Target, but I'm a video editor by trade.

What do you like about yourself?
I'm generally pretty friendly and easy to get along with, but that's all I can think of for myself. |D

What do you dislike about yourself?
I have a bit of a temper, I can be stubborn, and aside from growing uncomfortable with my birth gender, I hate my weight, my body hair, AND MY GODSDAMNED CURLY HAIR.

What did your friends notice about you when they first met you?
I'd have to ask again. ^////^

What is your belief/religion if you believe in anything at all?
I grew up Christian, but now I just think God's an asshole. Though, I still believe there must be something after death, as I believe in ghosts, spirits, and souls. That said, don't talk to me about death. Death scares the shit out of me..

Do you drink?
Not nearly as much as I'd like. :B No, I'm not an alcoholic, I'm just in no position to be drinking, like, at all right now. XP

Do you smoke?
Nuuuuu. I will say though that I've puffed a hookah with shisha before. I'll admit that in a group, it's kinda fun.

Do you have any dreams or goals?
I'd LOVE to work at Rooster Teeth, but I don't think that'll happen. x_x

What's your favorite dish?
Almost anything Italian~ I have a soft spot for Italian foods. X3

What's your favorite drink?
Dr. Pepper is the best soda, ever. Of all time.

What's your favorite color?
Midnight Purple. Funny enough, as a kid, blue and red were BOTH my favorite colors, so I guess I just eventually put 'em together. |P

If you had a super power, what would it be?
I want to be able to transform into anything. >///>

What's the last meal you want before you die?
Something that'd keep me alive longer. :B

What do you drive and what would you really like to drive?
Presently, a 2000 Saturn sedan. What I WANT though is a Dodge Caliber~

What is your most disliked bug?
SPIDERSOHGODSKILLEMALL

What pet peeves do you dislike the most?
That's a tough one, actually.. I'll get back to you on that. :B

What do you dislike in life?
While the world is progressively becoming more accepting and tolerant, there are still a lot of intolerant people who would sooner spit in your eye and spew hate rather than choosing acceptance. There is a LOT of social injustice in the world, and it really bites.