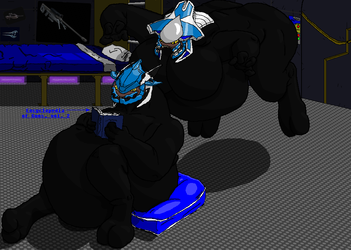 Gummer was always skinny. When a strange PokéPuff made him grow, he was surprised, but quickly accepted it.

Just a doodle WG sequence I did. I was fishing for ideas and asked Eddy what to do, tell me the first thing in his head. Given this is Eddy, I shoulda known better. Took longer than a doodle should take, but it was fun, and there's never enough weight gain. =^^=

(Yes, I know the ear things aren't tipped like that, this is just some random character I made and I wanted to differentiate him in case I wanna use him again.)