Worlds of the Teal Star System

Worlds of the Crimson Star System

Nations of the Worlds of the Candle Star

Nations of the Worlds of the Jade Star

Guild of Synth- Oldest guild in yivel and even older since the refugees from Landolai came to Yivel. A few members of the guild defected so the guild is officially been around since 1640 Casuch. Various groups sprung up even before that making it unofficially since 894 Casuch

Guild of Engineering and Mining

Guild of The Mystics of the One

Dating systems and history in around the Candle Star by Karen D., Ultin Recordkeeper

Pre Casuch-All the years before Casuch. Records were lost to first forms but civilizations were not organized enough to really make much history except migrating from here to there and warring against every other anything existing with them over every little disagreement. Such wars and entitlements include: "The War Against a Blade of Grass"

Casuch- period of regular history up to 198,025 years till the split of some races to other worlds. An era charcterized as an era where the worlds and all existences are merged into one unified plane.

-198,025- Rift shakes the worlds and planes into seperate unified wholes and ends the Casuch era.

Ben Kuch- Bits of the races of dwarvish, human, maginean, drakknaught, dragon, orcs, goblins, and trolls migrate to Alterr. Drakknights to Garbondego. Gryphons and bird variants all join and migrate to Aidosah.

-250- Hail Primus renamed to Hale Forth by Saynajaus of PRanoke

-1250- a nice bloody war breaks out on Alterr which wipes nearly everything out. Dragons forced to Fireclaw; orcs, trolls, and goblins into exile and finally some of the trolls, goblins, and orcs migrate to Trihlish.

Suc- Era of turmoil. Civilizations all spawning too large, either must risk war or decay in themselves.

Utherebb- Discovery of Seperate existing dimensions and Other worlds accelerates space race eventually leading into the expansion into other worlds and many wars. Several brittle unifications throughout the universe, war, expansion, etc. forever throughout all eternity and the universe.

Ultimentors:
Power "The Power"
Dream "The Dream"
Explore "The Explore"

Ultimasprit:
All 'The Imaginary Figment' 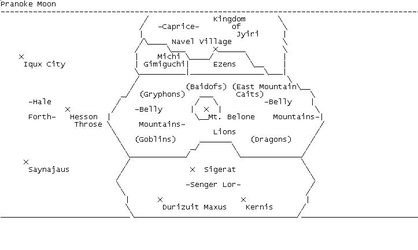 Older Writing from the Past