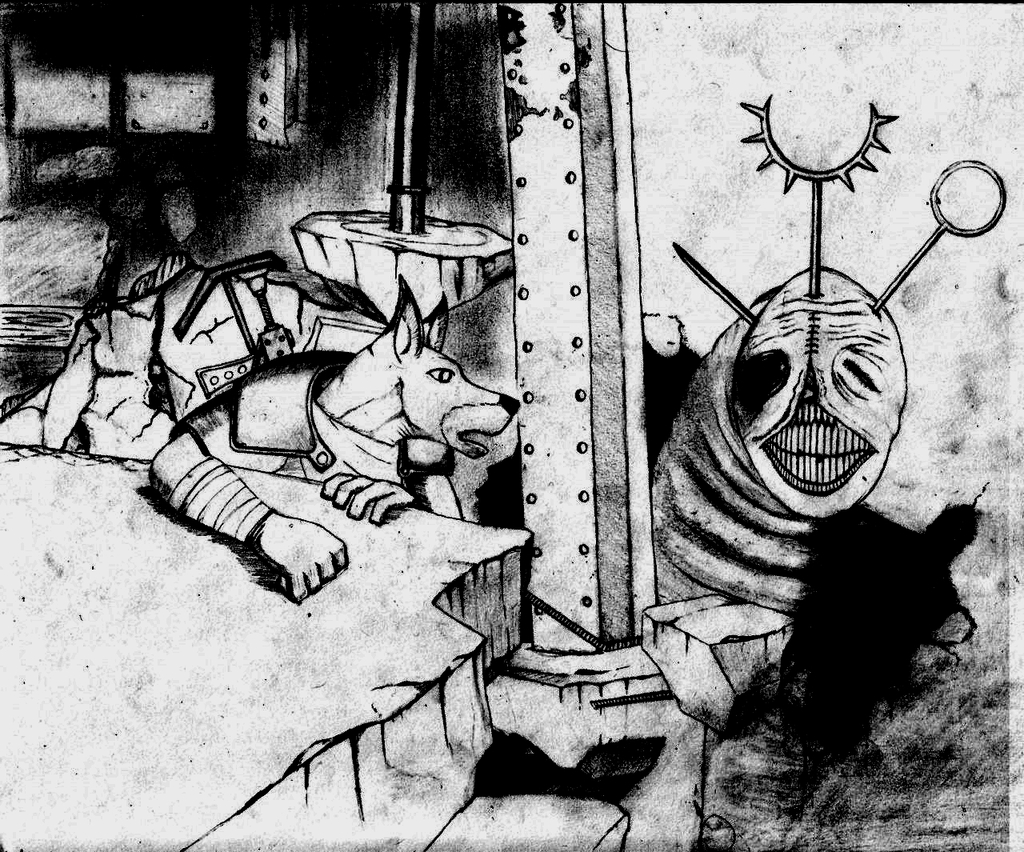 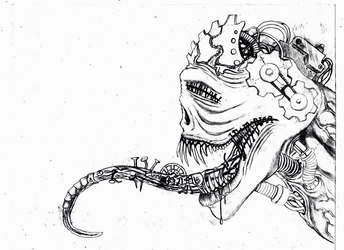 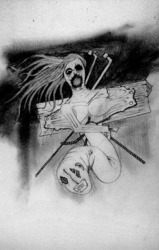 (Story Excerpt from The Elderscapes)

Grimm plodded deeper into the depths of the rotting decaying monument of hate, dread creeping up his spine, leaving goosebumps in their wake. At the first sign of sound or movement he would flee, or so he told himself. However, upon approaching a black yawning chasm in the wall, like a void to hell itself, he stopped. Peering in at that midnight offensive opening that devoured all light. A smell, the most awful, pungent, horrifing think blanketed his senses......decay...bloated decay, like roadkill in the hot summer sun on an open highway, wrapped it's coiled fingers around his brain, causing his eyes to water and that hot, heartburn, thick nauseous wave to roil up through his stomach. Grimm however remained stoic, keeping his food from re-entering society.

A movement, like a fresh pustulent pupae writhing in it's cocoon of filth caught his eye. His mind told him to run, the fear pleading with him to flee, run as fast as he could, get away from this new enourmous terror that lurked in the black. The fat folds of decaying bloated flesh writhed like an obese grub worm, flowing endlessly until finally the horrifying indescribable head of the thing loomed out of the filthy cavern, cracked ripped lips peeling back over broken teeth that jutted out from swollen infectious black gums. One eye was swollen shut....disfigured, as if infection had rendered it beyond use, while the other was a dark chasm, as if the eye had been scooped out with a crude blunt tool. Metal wires stitched up the center of the horrible thing it would call a face, while three occult like emblems jutted from it's misshapen skull.

The sound it made was beyond description, a wail, terrible and fierce, like that of a dying elderly woman mixed with a harsh angry bellow shook the walls, which was all it took for Grimm to snap back to his senses, he gave an unintelligible sound of absolute disgust and fear and sharply turned, clawing at the ancient decaying concrete that looked as if it were ready to crumble under his fingertips. A sharp pain, followed by a dull wet throb, let him know that one of his fingernails snapped in his panic stricken haste, but he would not worry about that now. He kicked and writhed to get to the top. With a raspy bittersweet groan of victory he pulled himself up and hastened back the way he came, it wasn't until he was of a safe distance that he turned to look back, the broken doorway he passed through was being peeked through by that misshapen swollen eye, leering at him with absolute hate and malice.

Residing in the Rusted Paradigm, dwells Omogg the Bloated, a massive ghoul worm that has made the infectious tetanus tower it's home. Omogg is one of the Great Seven that dwell in the Elderscapes, it is an embodiment of malignance and malicious will, an entity of pure spite and hatred for all living things. Grimm traveled the Malignant Expanse, in search of more provisions, when his travels through the charred ruins brought him before an ancient obelisk like tower that jutted into the heavens like a sacrilegious defiant finger, bent, crooked, and seething with dread and despair. Truly a tower for a tyrant.