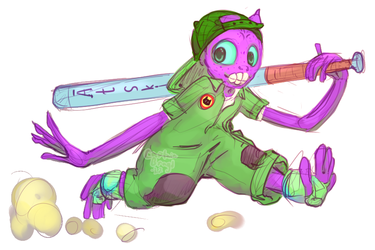 Made a propper ref sheet of my roboboy Konken since I love him a lots.

ALSO since I am entering him in ABBADONS Original Character Tournament and people need a propper ref if they are gonna draw their kung fu masters punch this poor robort inside out 8w8/
This is gonna be his main ref sheet for appearences in Shadowrun and other projects I've used him in, but since its for K6BDs here's his lore for the tournament:

Konken "BigBlue" X
Konken comes from a dimension where the rich sold their world piece by piece to the extradimensional conquerors. In a commune of rebells fighting that power, a maverick hacker and engineer built Konken to be his comrade in arms, and his son. A sapient program, growing and learning like a living thing, raised to fight the good fight and do KRIME. Aside from passionatly figthing alongside his dad, Konken also found a passion in fast hovercars and video games.
During a mission where his dads crew where trying to sabotage a deal between a large corporation and off-world assets, they messed up and got captured. Konken managed to escape and got lost across the Great Wheel while his family and comrades where put away for life in cyberjail.
Konken has wandered the planes trying to outrun his opressors reach, and running from his guilt. But as he came across the promise of the Ring of Power, he has decided to take the desperate chance. Hoping to ask for the freedom of his family if he makes it to the top.
While lacking proper martial arts training, Konken is equipped with superhuman processing and sensory functions, perceiving and reacting with incredible speeds. His chassi is built to withstand gunfire and heavy blows, and his arms are strong enough to bend metal. These qualities, along with his unique body plan, and the small arsenal he's brought, he hopes will give him enough of an edge that he can bash his code against the wall and break through victorious.
And he REALLY misses his dad.