Topaz the Gryphon by CanineHybrid 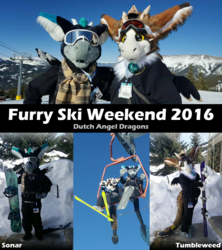 Meet Topaz! She is an Aplomado falcon and an Amur (Siberian) tiger gryphon, which are both amazing orange and black animals I love.

Been really excited about revealing this character for awhile! I've been working on it ever since Furry Ski Weekend back in February, brainstorming what creature suit I would design specifically with snowboarding in mind- things like large, forward-facing vision and casting the beak in expanding foam. Patreon people have known about this for awhile and got to see updates as it was being developed.

I actually had a hard time finding good examples of toony Gryphon costumes for reference/ideas that captured what I was after. So it did take a lot of experimentation with the shapes and design because I wanted something inbetween friendly and badass for the expression, which I hope I captured. Tigers, and birds especially, can have pretty intense-looking eyes, so I didn't want to scare kids too bad yet still look awesome in action. It'll be a partial suit at first and aiming to have that done for this upcoming ski season. It will be upgraded to fullsuit once I purchase a "clicker" style snowboard. I also wanted to take this opportunity to practice markings and working with fur more. Already have the fabric, just need to start the foam stage within the next few months.

Topaz is a tomboy, very outdoorsy, loves the mountains and does extreme sports with snowboarding being a particular favorite. Her normal attire is primarily activewear that suits the occasion. She also has a lot of pride for her state and has the Colorado flag on a lot of things she owns.

QUESTION/POLL: I'm also debating between the idea of making them a flightless gryphon (either because of extra small wings, or they're normal sized but had been damaged) and that's their motivation for their hobby- to get as close to flying as possible... or they're just inherently such a daredevil because they love flying so much and just want to incorporate that into other activities to make them even more extreme. What do you think of these character ideas?