Companionship and parenthood by Bulletforthedamned 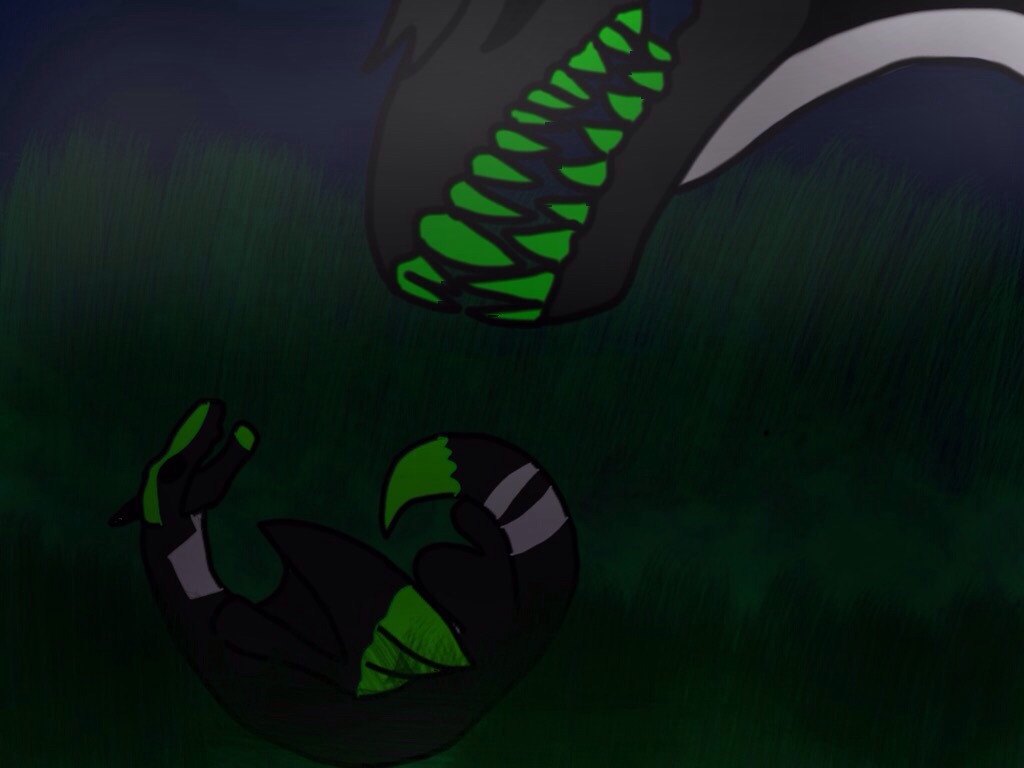 In the cool, clean air of the early autumn morning the forest was a beautiful place. The sky was filled with nightly birdsongs, and every which way one looked up it was framed by a fiery explosion of reds, oranges and yellows from the leaves of the tall trees, brightened white by the moonlight. It was just the sort of place that many sought out at this time of year as a natural refuge. A temporary retreat from the stress and grime of city life. A lone figure crunched through the leaves and undergrowth. The forest fell silent as a frisky blackbird chirped the warning of his presence gliding in and out the shadows. Soft, fresh, minty moss smothered fallen trees and the treetops were full of quiet life. Leaves were dripping sullenly with rainwater from a previous storm. The bird’s joyful singing had halted to silence and small paw prints of a young animal could be seen planted in the wet mud where the moonlight shinned dimly through the treetops, illuminating the forest floor.

The smallest of a rustle could be heard in just a moment as the wyvern peeked out of the rough dark green leaves, his bright green eyes glowing out of his hiding place to spy on a deer foraging in a clearing. Night hunting was the best hunting,he could see better in the dark then any other creature. Ring crouched low to the ground, bunching up his muscles then he sprang out of the brush with a roar like a lion, and tackled deer to the ground. In only a few seconds it was over, it’s blood glistening on the ground.

An alarming cry cracked the silence like an urgent alarm whistle whilst he was eating… The demon suddenly stopped. His head cocked to the side on alert. Scanning his surroundings for the pitiful cry. There it was again. The sound wailed for help again. He immediately responded, making his way towards the direction of the calling abandoning his kill completely. The whisper of his feet padding along the soggy leaves that carpeted the damp ground. Past all the familiar smells of the forest. Behind the stench of the saturated soil and the scent of waterlogged plants, another smell beckoned him. The cry echoed through the forest again. His stride became longer and faster till he was almost running. His glowing green eyes taking in his surroundings until the call got closer and louder and clearer. Then he found it. The beckoning smell had become mixed with other scents now. But he could see it and he couldn’t believe it.

A little bundle of wings curled up besides the body of a mother was the source of the sound.

The bundle of dark gray was a small demon cub. It stirred and whined again Blindly crawling towards the older demon, purring and cooing. Ringmaster backed away like it was a snake blinking fast. All this time he thought he was alone, that he was the only one of his kind but now he knew he was wrong, here was the proof after all. And the thought would have brought him complete joy had it not been for the situation at hand….claw.

The mother had passed away. The purple leaking from her eyes a all to clear sign of her passing. Her body was decayed partially. But there was enough of her to show him She was clearly a demon like him The only difference was her skin color, hers was brilliant scarlet and black and was lighter around the belly and flanks and her markings were different. She looked like she woulda made a perfect companion and or mate had he knew about her presence beforehand.

Ring looked down as he felt something touch his foot. The little cub had managed to crawl crawled onto his foot whining and crying. Though he was inexperienced with Cubs, his parental instincts kicked in straight away. He licked the baby gently and it’s crying ceased. The cub nuzzled his tiny little face into his warm Boney snout and Ring felt a nice warmth shiver across his body causing him to tremble and closed his eyes cooing . When he opened them again he looked at the cub. There were cuts and scratches all over the cub’s body obviously from some fox or something that figured since the mother was dead they would get a snack. But other then cuts and being hungry it looked moderately healthy despite its obvious ordeals. It had energy too. "Strong little sucker, aren’t yeah" he thought playfully as he brought his wing claw Down towards the cub. The cub took notice and began to play with it, gnawing happily on it.

Suddenly a rustle caused Ring to perk his head up and the baby to stop playing and cower. A familiar yowl caught his attention while a burgundy red coat burst through the bush.

There was a fucking wolverine .

Ring made a move and snapped at the wolverine. Well it did not make it happy. It started running around, trying to get to the cub snapping and growling in a effort to frighten Ring . Well it didn’t work. Ring pulled his head back and flung the wolverine on it’s back when it crawled on to his face and made the move to scratch his eyes. It scrambled to stand and barked at him before slinking away into the shadows. He growled threateningly at it before turning around to the cub who had cowered beneath his neck during the ordeal. Ring cooed comfortingly.

He couldn’t take care of a kit he knew that…But…what was He supposed to do? Leave it there where the badgers and foxes and wolverine could maul it to death? He knew he had a slightly cold heart, but the last thing He could wish upon a kit this young was death. The poor thing didn't even grow into his horns or teeth yet....

Ring sigh, he had no other choice. He took him carefully into his jaws and carried him away back home

Least they both wouldn’t be alone tonight