the battle orc by B Pavlica 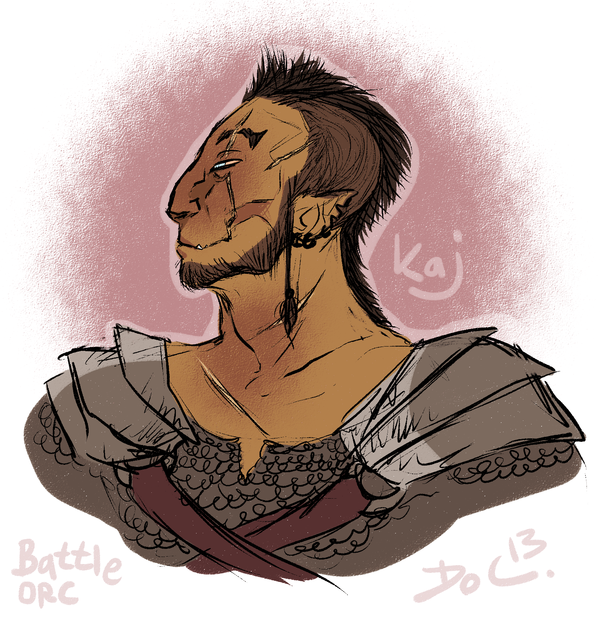 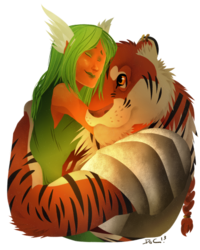 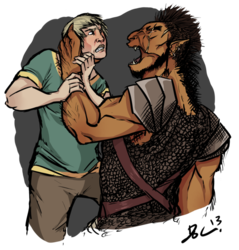 I revised my older character to fit into my fantasy story.

Kajetan is a battle orc now.

Battle orcs in this story are in alliance with the kingdom that has the wizard special elites in it's army. The kingdom I haven't named yet but is called 'lower kingdom' for the sake of understanding.

They are descendants of the more vicious and quite feral cave orcs (sometimes referred to as trolls). Some of them are a part of the lower kingdom's army.

Basically Kajetan didn't change much in personality, he's still gruff and extremely irritable, still extremely protective of all women and kids, still bisexual and still the worst morning person ever.

Only things that changed are his race (and therefore slightly his appearance) and well, his partner, due to both these belonging to someone I am no longer friends with.

I just really liked this character and didn't want him to go to waste.

I'll design original cave orcs and draw a comparison to battle orcs and humans to show the differences.

I should really draw all the races I revised and edited to fit my original story.

I really like taking pre-existing fantasy creatures and turning them around a bit. Working with well-known material and trying to make it original once again is always fun.

And so far I have wizards, knights, mages, orcs and kinda dragons and elves, tho I'm not really bringing anything new to those two, not yet at least. I'm still not sure if I'll be having elves in this or not.