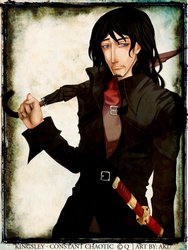 Art by Tim Flanagan, whose site continues to change, but here's his old DA page
http://timflanagan.deviantart.com/

SO THERE'S A STORY BEHIND THIS.

Brigrel Q is a hybrid gangrel character who was roleplayed mostly over MSN chats in 2000 - 2002. This character was arguably my first original roleplaying character ever (one not just a mismash of anime characters) and it is also the very first precursor to my most 'famous' character, quatrebornes.

I have the original inked art framed in a house, it is not watermarked. This digital copy is SO OLD, this is literally the only digital copy I have of this thing. Anyway.

The story behind Brigrel, in brief.

A guy who got turned into a (gangrel) vampire, frenzied a few too many times, and ended up with the bottom half that he has. Technically there's more to it, he's also an angel (hurr, I was like 14, give me a break). But really this is the gist. He was played in a midieval setting loosely based on the Vampire: the Masquarade universe.

This is the only art of him.

I have two other pieces from Tim Flanagan-- arguably the first artist I ever commissioned in my entire life (and I still adore his art), but I don't think I have any digital copies of them.