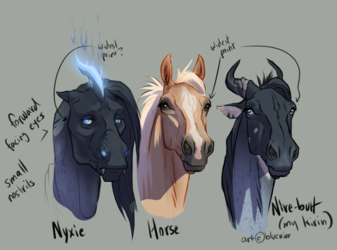 I wanted to explain why I might be a bit....distant/inactive for a bit?

I drew the "bowl" being strapped and sorta "grown-into" the person in a way for me to represent our "ties" with various negative thoughts and experiences.

Some of our troubles/negative experiences/stresses are superficial, short-lived, or relatively new troubles- so the "tie" is maybe temporary-or rather- it can be untied with some effort.

For some of us, maybe we've experienced a rather awful trauma or something.
Maybe our childhood was kinda shitty, and thus the "bowl" might become a bigger, more permanent thing, or at least something a bit harder to detach from.

So with that idea in mind, some people will have a smaller "bowl", or a bigger one.
They just don't soak up the worlds troubles and negative junk like some of us do.

Some people will be able to outright remove said bowls- some never develop that kinda of... "soaking negative energy".

But I think most people know what It's like to feel overwhelmed sometimes.

The reason why the character still is carrying that bowl in the bottom panel is because- at least for me, I've had this since I was 12?

I don't really think I'll ever get rid of it, the habit of soaking up stress and letting my internal-dialogue get to me.

I've just got to learn ways to cope, and I have hopes that- in spite of my depression good things will still be able to grow from me? I guess?

Thank you for reading.
I send my love and hope you're all doing well.