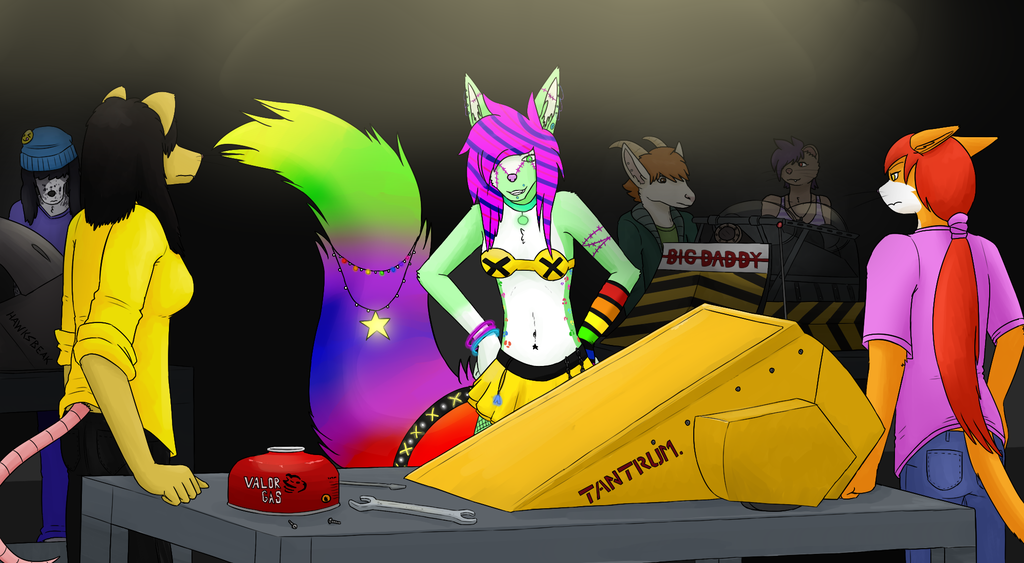 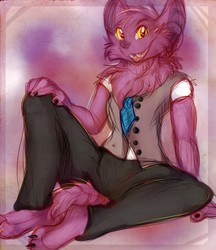 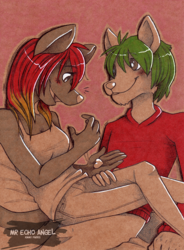 North Triston's robot combat circuit had seen the rise of a robot that was proving to be unbeatable. The still reigning champion after winning the competition three years running, Susan and her robot Hawksbeak crushed their way to each title, even managing to take out several very powerful robots in the process. Almost every other team competing was terrified of being drawn up against Hawksbeak, knowing that the damage the machine would cause to theirs would be unrepairable if Susan chose not to hold back. Now, she had reached her fifth Semi Final in a row, and looked set to reach her fifth Grand Final, having easily defeated the unseeded Crazy Thing by puncturing its tyres and leaving it immobilized.

The cat and mouse team Philippa and Rona had reached their second Semi Final with their new robot Tantrum, returning as the #9 seed for this series. Now, to qualify for the Grand Final, they had been drawn against the #1 seed Hawksbeak, the robot that they had lost to when they had managed to reach the very last fight in 2010's championship with their previous robot Rabiata. Despite Rabiata managing to flip Hawksbeak over several times, it had self righted each time, and had pierced its flipper and one of its wheels with its crushing arm, disabling the flipper and causing Rabiata mobility problems, leading to them losing the judge's decision and the title to Hawksbeak.

However, worse came in 2011's tournament, for despite being given the #2 seeding, they suffered a devastating loss to newcomers Codswallop in the second round of their heat when their flipper's pneumatic rams exploded after mistiming a flip, leaving Rabiata with no weaponry or means of self righting and the rams hanging out the front. After spearing themselves on the arena wall, Codswallop swiftly flipped them over, with its failure coming as a massive shock to the audience and fellow competitors, more so when the damage proved to be so serious, Rabiata would be retired after Philippa and Rona's departure.

Tantrum had reached the Semi Finals in both of the series it had entered, losing to #3 seed Whiplash in the first round of 2012's Semi Finals when both of its tyres deflated, allowing the rambot to swiftly push it into the pit. This time, they'd come up against Codswallop again in their Heat Final, and had soundly defeated it to go through. Despite how many teams knowing how dangerous Hawksbeak was, neither Philippa or Rona, having lost to Susan twice before, showed any sign of fear as they prepared their beloved machine for the next battle.

"Okay, this time," said Philippa as she inserted the now fully charged batteries, "we try to attack from behind. Hawksbeak is vulnerable to attacks from the rear."

"She always keeps her crushing claw in front of her opponents, Philippa." said Rona as she pulled out the CO2 bottle for the flipper. "You know how nimble it is. So what we've got to do is circle around her until we can get behind. You're driving this time, so don't let her catch up to you."

"I feel so sorry for you two right now." said the goat from the next bench, who was working on his own robot, Big Daddy. "We might have Cuttersaurus up next, but they know when to hold back."

"Well well well," drawled a high pitched voice, "what have we got here, hm? The game of cat, mouse and dog again." Standing before the cat and mouse was the sparkle dog herself, Susan, captain of the Hawksbeak team. And she showed a haughty smirk as she began to inspect their robot.

"What do you want?" demanded Rona.

"Just thought I'd get a good look at who I'm up against next." grinned Susan, swishing her tail in Philippa's direction. "Hm...your flipper's vulnerable. You might fall to me as easily as Barracuda did if you're not careful."

"You wanna bet?" sneered Philippa. "This is the third time we've met. And this time, we're gonna have you." This prompted members from several of the surrounding teams to gasp in anticipation. But Susan wasn't swayed.

"What's happened to you?" snapped Philippa. "You never had an attitude like this when you first started."

"See you in the arena, ladies. Don't keep me waiting now." And with that, she lazily made her way back to her own bench, leaving the cat and mouse team ired.

"But who can defeat her?" cried Philippa. "Look at her. She thinks she's unbeatable."

"She didn't do that to us." said the goat. "She slowed down to look at our robot, but she didn't taunt us."

"One of us can prove her wrong this year." answered Rona. "She lost her Grand Final Eliminator fight after the first time she beat us."

Alright, I couldn't think of a better title than the one Blangry came up with. ^^;

Well, here we have it. The first time I've begun to use my first adopt Susan, and the first time I've elaborated more on Philippa and Rona's place on the robot combat circuit. ^^ Made by the marvellous DatBlangry, we have the team with their new robot Tantrum getting ready for the fight that'll decide whether they go through to the Grand Final, only to be rudely interrupted by a nosy Susan, hoping she can puncture in just the right places. How will their third fight with her go? You'll have to wait and see. ;3