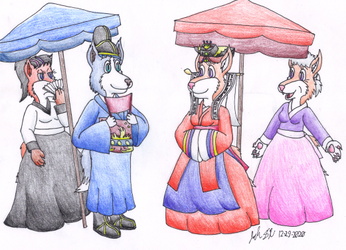 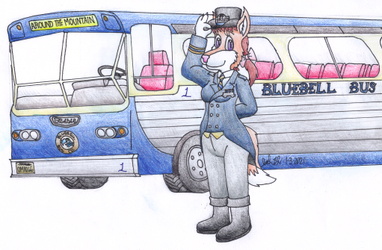 This bit of artwork was done last year.

BobGrayWolf) ever since I saw this picture of her (https://www.weasyl.com/~bobgraywolf/submissions/1672431/new-fashion) I actually quoted on how much she looked like a maid and even though Bob clearly said she wasn't it was just too much for me to resist and I even added the missing accessories.

The service maids on the Furryland Railway wear uniforms that are exactly like this though. They're the ones who make out the state rooms and serve refreshments to the passengers. I gave Bluestar the pose in doing just that which is why she's carrying a tray of tea cups. I've also been hoping to utilize Bluestar in being the chief purser on Bartleby and occasionally Alicia's trains but only on DeviantArt.

Don't know where the name Bluestar originated but I'm assuming it's the Warriors character Blue Star.