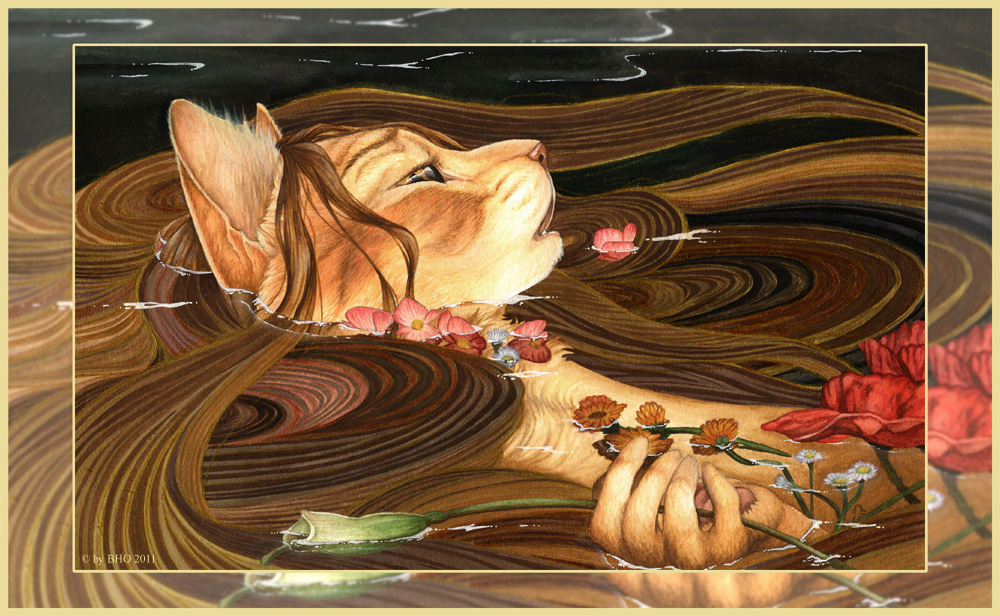 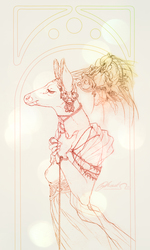 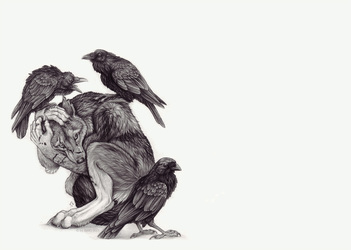 Attention: Long and probably rambling as well as jumbled artist comment ahead.

This picture was my main piece for the Mephit Mini Con art show. The con's theme that year was death. Not the Zombie-Horror-Hollywood version, but „plain ole death“. In the beginning I was very opposed to the topic for various reasons and I could find no access to it. I had almost accepted the fact that I wouldn't be producing any art according to the con theme, but then something happened and I suddenly got buried in so many wonderful ideas circling around that topic so that I ended up having a hard time deciding which one to draw.

I don't have much panel space this time, as I won't be attending in person, so I had the choice of drawing many small pieces and cover as many ideas as possible, or concentrate everything on just one image and that's what I did.

Ever since I saw the anime “Ergo Proxy” I have developed a certain fascination for the “Ophelia” painting done by Sir John Millais and this is very obviously the main reference I used. This piece fascinates me. It crawls under my skin and horrifies me, yet I cannot stop to look at it again and again. → http://en.wikipedia.org/wiki/Ophelia\_%28painting%29

I don't claim to be able to achieve the same effect with my humble homage, but I wanted to try to lean on Millais' original art work, add a personal note to it, steal a bit golden mania from Klimt's “Water Snakes I” → http://www.artsoho.net/imgg/klimt42.jpg and see what happens... You see the result here.

This was my first painting in which I used Gouache as a main medium, mixing it occasionally with water colours. This worked astonishingly well and I am pleased with the way this paint reacts and can be handled. Unfortunately I cannot say this for the golden pain which I used for the more abstract hair of Ophelia, which lies beneath the water's surface. Painting that often brought me to the verge of tears and I had to re-do many passages several times. Of course the gold and glittering effects totally got lost in the scan.

There would be so much more to say about why I chose the Ophelia imagery, why I made her a cat (besides the honest reason that I simply lack skill to create a believable human face that is even remotely as shocking as Millais' Ophelia), about women and suicide, the element of water, the symbolism of the flowers (begonias, daisies, marigold, a calla lilly and poppies) and so much more, buuuut... I think in the end it's better for the viewer to open up everything for himself, to find his or her own and most personal approach to this piece.

My own feelings about the outcome of this experiment are mixed. A few things turned out as desired, most did not. The final result deviates a lot from what I originally had in mind and I guess this leaves a bitter after-taste of disappointment rather than the feeling of accomplishment. This seems to happen with all bigger pieces I am doing since a while though, so I cannot really say if it's really just a matter of my Ophelia or “just” a general phenomenon.