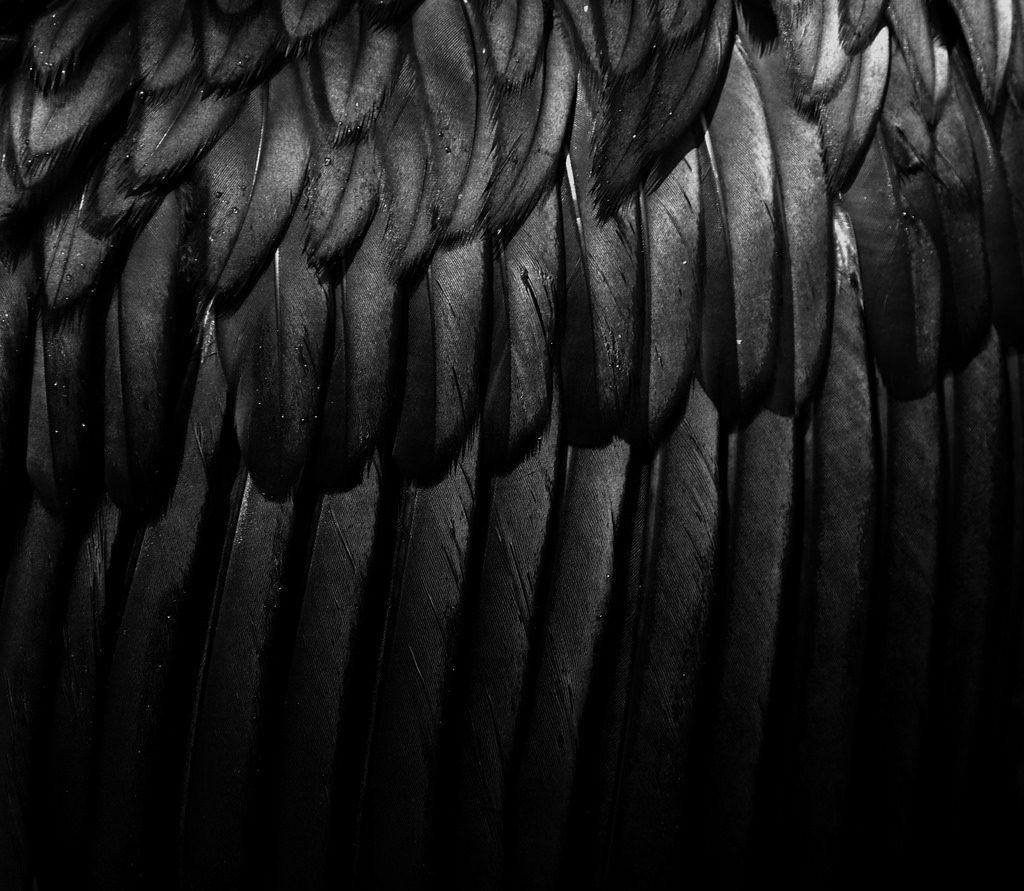 They reeled arm in arm out of the festival, laughing. Aziraphale was stuffed to the gills and had gotten his palm read, among other things. Crowley had only tasted bits of the various food on offer, but even he’d gotten enough to make nearly a full meal, and they’d both indulged themselves during frequent trips to the beer tent.

“Come back to my place for a nightcap?” offered Crowley as they approached the Bentley.

Aziraphale heard something more serious in Crowley’s voice than the offer seemed to warrant, and he glanced over. Crowley’s shaded eyes revealed little, but Aziraphale wondered. They’d been feeling their way into what it meant to be able to touch. The one kiss hadn’t been repeated, but Aziraphale knew both that he’d welcome more—more kisses and more than kisses—if Crowley wanted, and that he would be happy with what they had now if Crowley didn’t want more. That made it tempting to just coast along, to not try anything new. Nightcaps were hardly new, but they’d always been at the bookshop before, never at Crowley’s.

Well, he’d just told himself that he’d welcome more, so he was hardly going to reject whatever “more” was being offered now, was he? That made things quite simple. “That sounds delightful, my dear.”

They settled in on Crowley’s couch, glasses in hand, and Crowley immediately draped himself across Aziraphale, finding a position that must be comfortable, though it looked quite ungainly and awkward. He tossed back the quite nice old brandy he’d poured for them with a contented sigh, which Aziraphale echoed, though he only sipped his own drink.

“This is nice,” said Crowley.

“It rather is,” replied Aziraphale.

“Nearly done, I think,” said Aziraphale. The old feathers were all gone, of course, but the new ones were still coming in. They’d all sprouted at once after Crowley had plucked the white ones out, and all the little coverts were fully grown, but the final secondaries weren’t quite done, or hadn’t been as of yesterday, at least. “I haven’t looked yet today.”

Aziraphale hesitated, then said, “If you insist.”

With a wry shake of his head, Aziraphale manifested his wings. They were no longer piebald or patchy, but were sleek, squid-ink black, just this side of the pure color. Where the primaries and secondaries met were the final pinfeathers, two on each wing, and eying the length of them, Aziraphale thought they might both be done growing now.

“Looks good. Just need to fluff up those last few there.” The demon gave Aziraphale and the couch a thoughtful look, then said, “Not really room there for a proper grooming. You can sit on the rug, or we can go back to my bedroom? Just to groom your wings.” Crowley’s cheeks were flushed, and Aziraphale felt a hint of heat in his own, but he nodded.

Crowley’s bedroom was huge, and as Aziraphale stepped into it with wings half-furled, he had a sudden suspicion about why. Spreading them to their full extent, he found they were just short of touching the walls, and he sighed happily, flexing and stretching them. “Oh, that’s nice.”

“Sit down here and I’ll make it even nicer, angel,” said Crowley, with a suggestive little eyebrow waggle.

Aziraphale laughed and sat down on the bed. Crowley, of course, only sat behind him and stroked a hand along one wing. “Looks pretty good. I think these last two are done, though, so they need to be fluffed up.”

Pinfeathers came in with the barbs in place, but they were slicked down to the shaft with a waxy coating. Birds stripped it off with their beaks. Angels used their fingers, and it worked just as well. It seemed demons did the same, for Crowley expertly began combing the wax from Aziraphale’s secondaries with a firm but gentle motion, and when it was all removed he fluffed up and smoothed out the barbs, until sleek, perfect feathers stood where awkward quills had been only minutes ago.

Aziraphale couldn’t help but relax into the touch. Having his wings preened was lovely. Crowley seemed to feel the same about doing the preening, for he didn’t halt once the secondaries were all set to rights, but kept combing his fingers through Aziraphale’s feathers. They didn’t need it, since they were all fresh and new, and none were damaged or disarrayed yet, but he did all the same, and Aziraphale wasn’t going to complain.

“Never been to a Pride march before,” said Crowley as he worked. “Might go more often if I get to cause trouble like that. Beer tent had some pretty good options too. That nice little Belgian was a treat.”

Aziraphale smiled. “I don’t know that defusing a fight really counts as ‘causing trouble.’” He frowned faintly as he thought more about it. “Though I suppose we’d have caused quite a lot of trouble if that fellow hadn’t backed down when I put the whammy on him.”

“Some humans can resist the evil eye, yeah. Though it felt like you put some real juice behind it, angel.”

“I was so angry,” responded Aziraphale, still frowning.

“Hah. Maybe.” Aziraphale considered that. “It wasn’t anything I haven’t felt before, to be honest. But on previous occasions when I was deeply angry, I pushed it down. ‘Vengeance is mine, saith the Lord,’ you know. It wouldn’t be proper to act in anger. I was meant to light people’s lives, not curse the wicked. And yet…” He trailed off, turning the thought around in his head. It was a strange sort of thought.

“Well, I did light a couple of lives today. Those two young women. They were pleased at what I’d done. It seems odd to do good through a curse. I suppose, though, if God can curse people and still remain good, perhaps I can as well.”

Crowley just shrugged and continued his grooming, and Aziraphale let his eyes half close as he relaxed back into it. He felt as though he might purr, even in human form.

Aziraphale let out a deep, contented sigh. “Simply lovely, my dear. Thank you.” He stretched his wings to their fullest extent with a luxurious groan, then folded them in again. Turning around, he found Crowley staring at him, with an expression Aziraphale couldn’t quite categorize on his face. It had something of want in it, so Aziraphale said, “Shall I return the favor?”

Crowley’s expression instantly became guarded, and he gave a little shrug that was no doubt meant to be casual, but didn’t manage it at all. “Eh, you don’t have to, angel.”

“They’re not very pretty, they’re—” Crowley came to a sudden halt, and his cheeks flushed.

Aziraphale chuckled. “You were about to say they’re too black to be as pretty as mine, weren’t you?”

“Of course not,” said Crowley, but his flush deepened.

With a smile that was more than a little wicked, Aziraphale said, “It seems I’ve found another nice thing about being a demon. It quite robs you of your silly urge towards self-denigration.”

Crowley let out an indistinct grunt and wouldn’t meet Aziraphale’s eyes. His cheeks were still quite pink.

“Come now, I do want to see your wings. I almost never get to, and I’ve always thought they were lovely, right from the first.”

Crowley’s blush intensified, and he muttered something vague and grumpy under his breath, but his wings popped into existence behind him and he unfurled them willingly enough.

They were a deep, absolute black, the highlights showing blue. “Lovely,” murmured Aziraphale with a smile. To be honest, his own dark sepia wings seemed rather drab next to Crowley’s glossy raven’s black, and he found himself idly considering writing a poem about the color. He mostly confined himself to reading, but he’d penned a few things over the centuries, and Crowley had been the secret subject of rather a lot of them.

Aziraphale shook off that thought and folded his own wings in close, then urged Crowley down onto the bed before settling in behind him. Crowley’s wings were in a bit of a state, and Aziraphale tutted as he began plucking out hopelessly broken feathers. He could feel the way Crowley’s wings were tensed, his back muscles taut, as Aziraphale began, but slowly he started to relax.

By the time Aziraphale had gotten all the truly terrible feathers plucked and was combing the merely bedraggled ones into order Crowley was nearly limp, eyes closed, little involuntary sounds of pleasure escaping him whenever Aziraphale smoothed a particularly ragged and no doubt itchy patch of feathers.

“There,” he finally said, smoothing one last little scapular. He gave in to the urge and bent to kiss just between Crowley’s wings. Crowley stiffened, so Aziraphale didn’t do anything more, though in the back of his mind there was a rather incoherent jumble of thoughts, consisting of all the racier bits of classic literature clustered around the realization that lust was one of the sins he would have to tick off if he were to actually do all seven. He didn’t feel lust now, exactly, he hadn’t made the effort to have the physical parts for that, but there was a longing within him that could very easily transmute itself.

He was hardly going to push that on Crowley if Crowley wasn’t interested, though. So he only remained where he was, kneeling behind Crowley on the bed.

With a soft sigh Crowley leaned back, settling more or less into Aziraphale’s lap. Aziraphale shifted his knees apart to accommodate Crowley, and allowed himself the luxury of stroking Crowley’s hair as he laid his head against Aziraphale’s chest.

That got a moment of tension, but only a moment before Crowley relaxed again. He shifted, and folded his wings into nonexistence, before curling himself up in Aziraphale’s lap as if Crowley were the cat and not the former angel. Though Aziraphale supposed that snakes certainly curled up as well. He smiled and continued to stroke Crowley’s hair.

Aziraphale’s wings were black, his eyes slit, his whole being changed. He’d Fallen, lost his grace, and learned to sin. He should have been a miserable ball of guilt and loss, and yet in this moment he was more content and comfortable than he’d ever been in all the eternities he’d spent in Heaven. 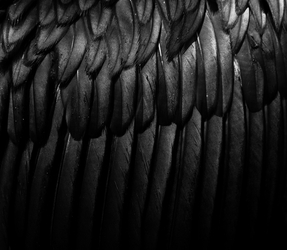 A little bit of wing-related fluff. I am not a falconer, but I have worked with birds some, and I do try to have accurate wing/feather facts.