"I'll burn that bridge when I come to it."

I'm Techno, BFSUnit214 or Harbinger, depending on where you find me from. I'm an twenty year old digital artist, though I do dabble in offline techniques, as well as other random stuff. I know many more traditional techniques, but I find I prefer digital to traditional media because I waste a lot less when I don't like something. Which, happens a lot. I own, or rather am owned by, two orange shelter cats, a black cat who honestly looks like a football, and a hedgehog. As you might guess, I like animals. As such, I'm currently in college studying to become a veterinarian. I'm also quite fond of science fiction and space.

A common image in my art is Technologic. He's not a "fursona" so to speak, but rather he's just a mascot character for me. He more or less performs the function, but I personally don't like using the term. I use him when I'm bored, or when I want to represent myself.

I'm not the greatest at getting involved in communities, but I'll generally lurk in the background. Even so, I'm almost always up for a chat!

Most recent: Running Through the Aurora 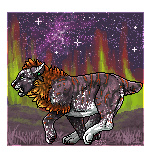 Well dang. It's been a while since I've been here. I guess I just fell off the posting wagon here? I've been pretty bad at posting art in general, but here on Weasyl, sheesh. I think it's been like four years or something? I do not remember, I admit. Either way, maybe it's time for a change. There has been a lot of drama over these years, a lot of problems, and honestly? Not a lot of good things. I need to work on changing that. So, let's get this started. Probably going to be a lot of old art uploaded at some point soon. Maybe I'll get Einespine to chill out while I do it.