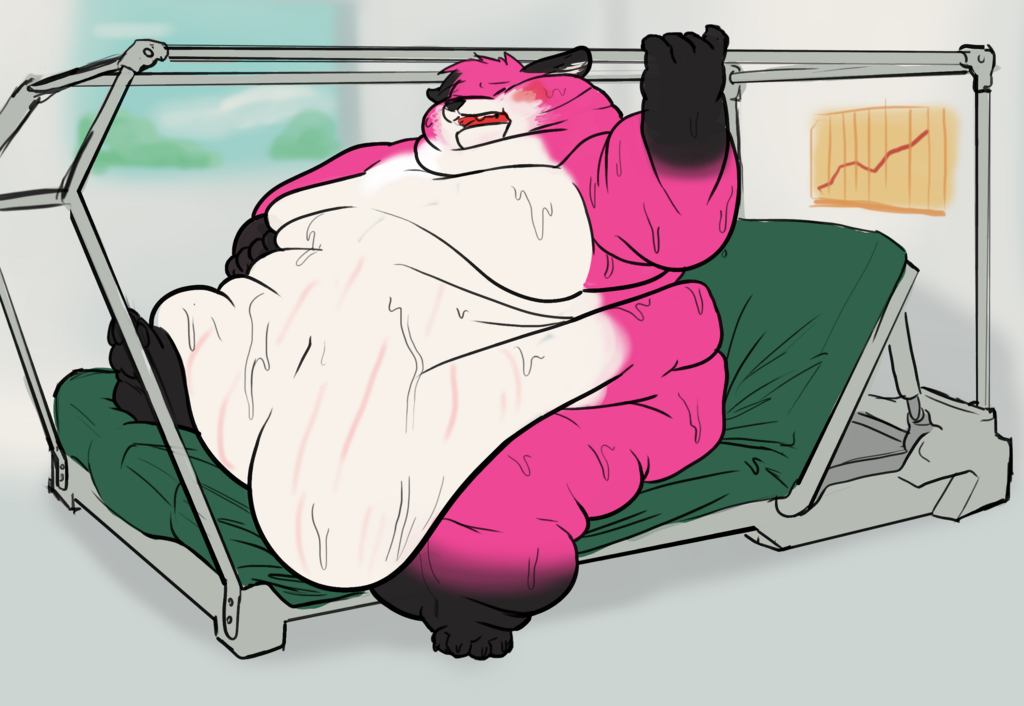 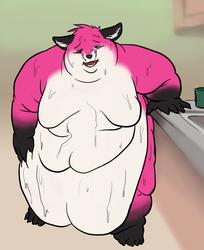 The fourth and final part of an art and story weight gain commission for https://twitter.com/DolbyVixen!

Dolby had woken before his alarm but, as winter was spreading its icy tentacles through his home, he felt in no great rush to leave the warm cocoon of his bed. He lay there, gazing up at the dark ceiling across which a shaft of chilly morning light was spreading from the gap in the curtains, contemplating the day ahead: a good, hearty breakfast, then back on the road again. But for now, being in no great rush to pick up today’s trailer, he chose to remain in the cosy confines of his bed.

And what a bed it was. The effects of long hours behind the wheel and a constant supply of the junkiest of foods had necessitated investing in a specialised bed, even if he wasn’t going to make too much use of it. Its reinforced steel frame groaned slightly as he shifted his position, slipping one fat-swaddled foot out from beneath his belly and the blankets covering it to sample the temperature beyond his safe space.

It was cold, too cold, but it seemed that his brain was to be overruled: his stomach, so used to incessant snacking, was demanding nourishment with a characteristically loud growl. With little choice but to heed the directive, he flung the covers from himself and seized the sturdy metal bar above his bed, ready to heave himself upright.

Both feet found the floor, and so did the bottom of his gut. The mere effort of turning so that he sat on the edge of the bed had his breaths coming quicker and deeper, sucking air into lungs that were utterly encased in adipose.

He leaned forward, his grip tight upon the bar, simultaneously pulling with his arms and pushing with his legs. His rump, now as wide as his legs were long, rose a few inches above the mattress before gravity dragged him back down; no matter, he rarely achieved a standing position on the first try these days.

Both hands seized the bar this time, the muscles within his limbs bunched up as they attempted to lift hundreds, if not thousands of pounds of fat fox up from his comfortable surroundings. Slowly, his knees straightened, trembling under the effort before…CRASH! He was back on the bed, its reinforced frame groaning ominously.

He tried again. And again. And again. For fifteen whole minutes Dolby did his utmost to stand up until he had no choice but to collapse back against his pillows, panting heavily and sweating profusely despite the frigid air surrounding him, finally and utterly defeated by his heft. It seemed there was no chance of him even making it to the kitchen now, let alone into the cab of his truck.

For a while he contemplated his predicament, waiting for his heavy breathing to die down enough for him to make the call to the company expecting him to pick up a shipment of action figures to tell them that, most unfortunately, they would need to find another driver.

There were, of course, pros and cons to at last achieving what he had increasingly threatened for so long: becoming truly immobile. He wouldn’t be able to take care of himself anymore: no cooking, no cleaning, no errands, not even washing.

‘On the plus side,’ he thought to himself, reaching into the bag on his nightstand and extracting the last of the donuts he’d picked up last night, ‘it’s a great excuse to order takeout. I wonder if McDonald’s deliver breakfast…’