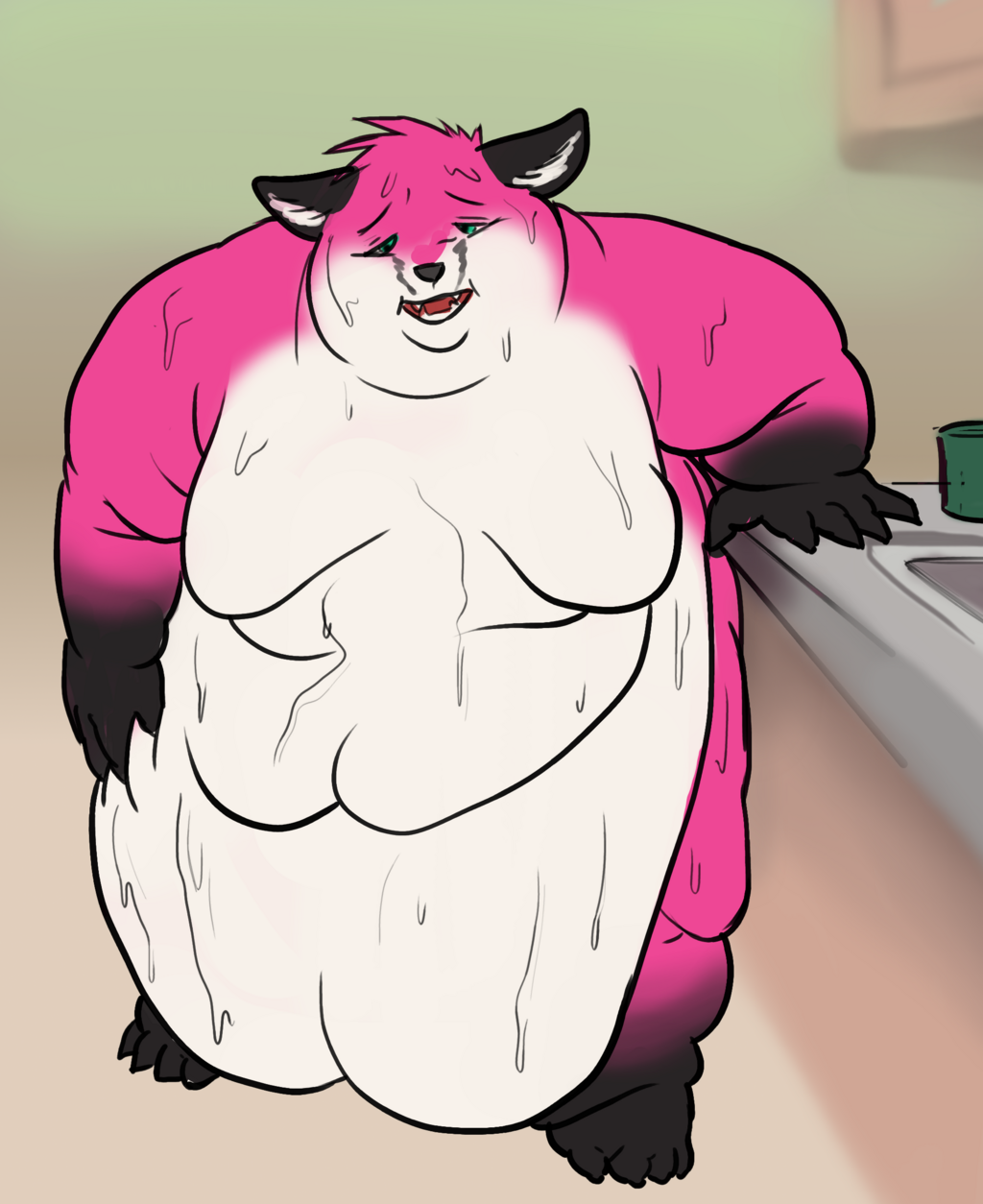 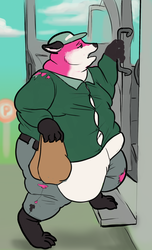 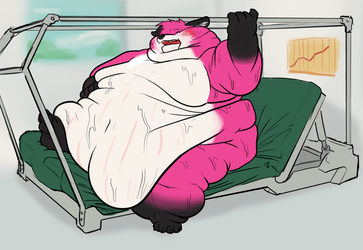 The third part of an art and story weight gain commission for https://twitter.com/DolbyVixen!

If this was a rest day, why did it feel so much like work?

A dark-furred hand clutched the doorframe, clinging desperately to the painted wood as the rest of its owner’s body came lumbering around the corner. Had each stride not been so laboured, so shuffling, the walls, the pictures that adorned them, and every object not bolted down would have been trembling and rattling as Dolby passed. The floor beneath the thin carpet on which he walked was concrete, so why did it almost sound as though it was creaking?

The pink fox transferred his hand to the wall now to support himself as he made his tortuous way down the hall. Had there been anyone to witness him, his modesty would have been preserved, not by clothing, but by the apron of belly fat that sagged over any hypothetical waistband, slumped down his thighs, tumbled past his knees to dangle a perilous few inches from the floor below. It was now impossible to tell where one part a leg ended and the next began: they had blended into one continuous adiposian mass that were pressed firmly together no matter how far he tried to spread them. Yet it was they who were tasked with carrying him to his destination, needing to fight their endless battle against the wall of cascading vulpine gut the whole way.

His breaths came in pants and wheezes as he advanced foot by agonising foot, sliding his hand along the wall of the seemingly endless tunnel that was the main thoroughfare of his home. He swallowed, pausing for a moment’s respite, gazing longingly ahead of him to the next doorway; this was motivation to get him moving again, though he could hardly tell that he was making progress at all.

At long last he was able to close his fingers around the kitchen doorframe, peering back the way he had come; had he really only travelled fifteen feet? Thankfully, the counter was closer: he staggered across to it and leaned against it, sweat pouring from every inch of his vast body, gathering in the folds between his rolls of fat.

It was time for breakfast, but Dolby ignored the cries of his body for something healthy in a modest portion: his stomach demanded a veritable feast and he had not the stamina to prepare anything, his knees were also in some considerable discomfort. He therefore seized the second box of donuts he had thought to purchase, shoving aside the top container that had been laid bare of its two-dozen capacity the night before.

Turning, he proceeded not to the more conveniently positioned kitchen table but to the couch in the neighbouring living room: no IKEA chair could support such an enormous specimen. He all but fell upon the grubby cushions, having practically flung himself in their direction from the kitchen counter.

‘I need another shower,’ Dolby thought to himself as he seized a donut at random; how ironic that the increasingly snug cubicle of ablutions had been where he had started this most treacherous of journeys.