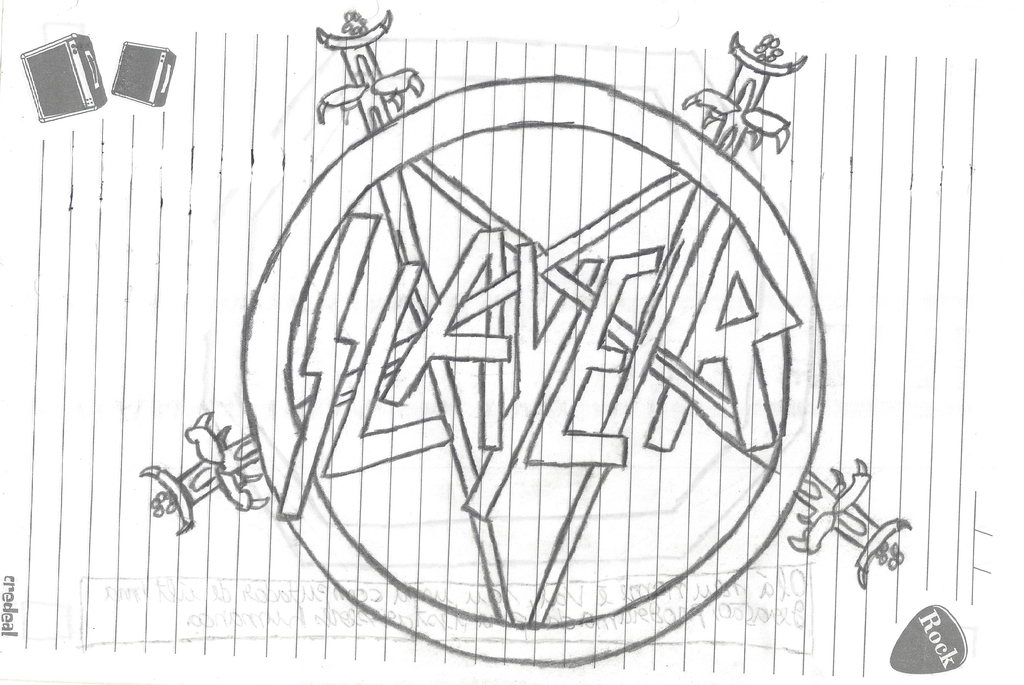 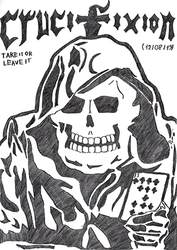 To finish here is my final piece, it's not a great drawing, but I think to finish my line of compositions is something interesting.
I did this drawing a long time ago also when I was listening to the album Hell Awaits (1985) of the thrash metal band Slayer, I love metal and my favorite band is Slayer; I love this pure, raw and totally chaotic sound produced by them!

This is a very simple fanart since I didn't have many really cool ideals of what I could do at the moment, so here's just a simple tribute.

The paper is well stained because I did some drawing with some dialogue balloons on the back of the paper with pen, so try not to mind the stains on the paper.

More info about Slayer below:
"Slayer was formed in 1981 by Los Angeles schoolmates and guitarists Jeff Hanneman and Kerry King. Tom Araya soon joined on bass and vocals, and drummer Dave Lombardo joined last in 1982. They played in a style reminiscent of early Exodus, influenced heavily by Iron Maiden and Judas Priest, before their attendance at a mid-1982 Metallica concert convinced them to play faster and heavier.

"Black Magic" was written in February 1983 and marked Slayer's definite venture into thrash metal. They secured a spot on the compilation appearance Metal Massacre III in 1983, contributing the speed metal song "Aggressive Perfector". They also recorded two demos in 1983 and became a popular live act in the Los Angeles area (in 1983, Bob Gourley filled in for Dave for one gig and later appeared in Dark Angel). Their debut LP, Show no Mercy, was recorded in November, 1983.

Show No Mercy was released after Slayer appeared on Brian Slagel's Metal Massacre III compilation. Then came the two EPs Haunting the Chapel and Live Undead, the latter of which was actually recorded in the studio in front of 50 of their closest friends.

After 1985's Hell Awaits, Slayer were signed to Rick Rubins Def Jam record label, better known for acts like Run DMC. This led to three studio albums, including the brutal Reign in Blood, as well as a 1991 live double CD, Decade of Aggression.

Dave Lombardo left the band in 1987 for several weeks and was replaced for a few live gigs by Tony Scaglione (Whiplash), and then again left in 1992. Finally, in 1994, Paul Bostaph from Forbidden was brought in and three more albums were recorded. Drummer Jon Dette was an official member of Slayer briefly in 1996.

In 2001, Bostaph left to join Systematic. Lombardo, who had been in Grip Inc. and Fantômas, rejoined the band." - Encyclopaedia Metallum, The Metal Archives.