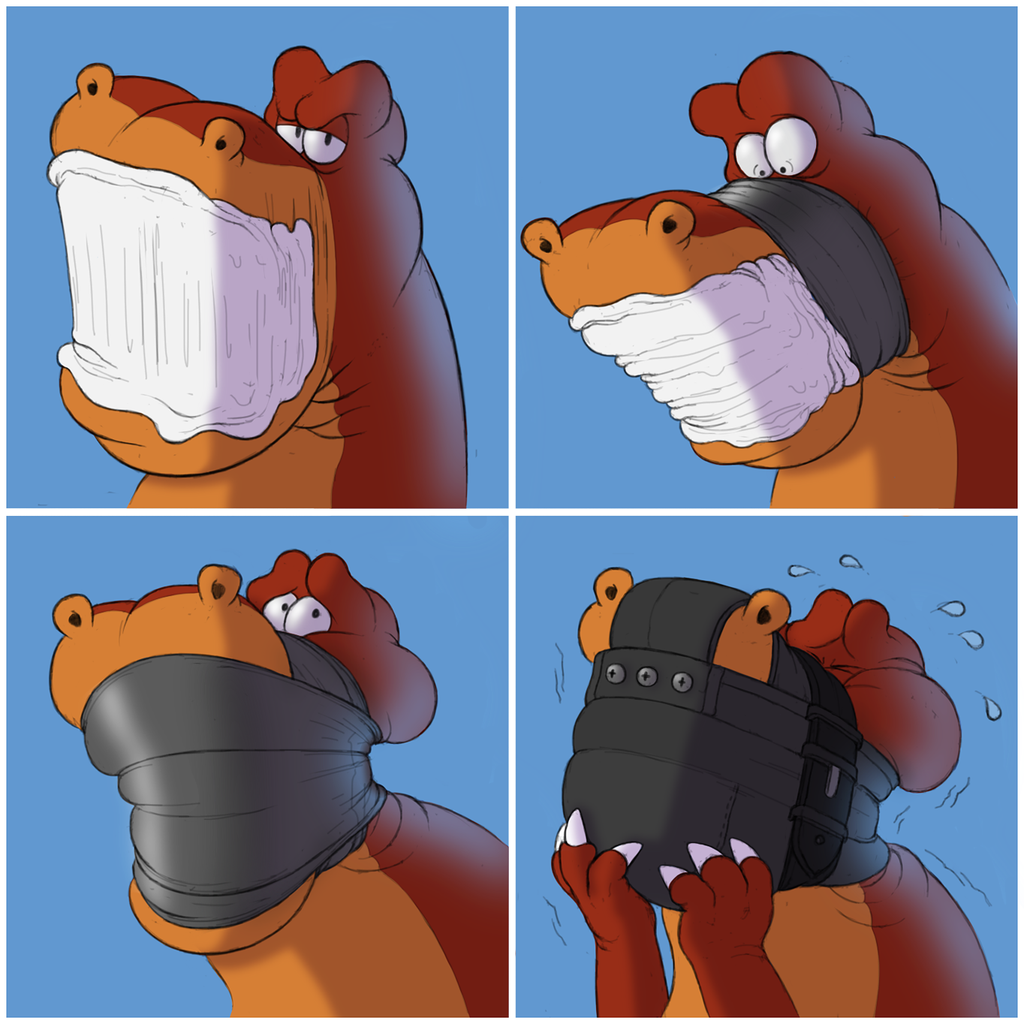 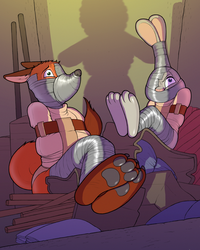 Rex I going to show the live studio audience just how many Muteness(tm) Bondage Products one can wear at once. Whether he wants to or not...

Artwork by the excellent bondagefanart

Open on an anthropomorphic bull-terrier wearing khaki pants and a blue polo shirt bearing Muteness’
logo. He stands beside a table containing a black case.

The dog opens his case and retrieves a number of items. Among them are rolls of thick, black tape, a
leather muzzle, a ball gag, super glue, and an O-ring gag. He holds the ball gag up to the array of video
cameras.

“These products are thoroughly tested and are specially designed for long, long, long periods of wear.
Even a hyena couldn’t break this ball, trust me. Hahaha. Muteness is an authority in extreme bondage
with lines of specially designed products for any kinky desire. The company’s legacy extends all the way
back t-- Aww who am I kidding. I’m sure you’re all dying to see the demonstration right?!”

“I don’t blame you. It’s my favorite part of the presentation too. But this time we’re going to do
something a little different. You all know about their Ball-Me™ gag and the excellent Hushpuppy™
muzzle. In this presentation we’re going to use a couple Muteness products at the same time to show
you a next level gagging experience. Let’s bring out our, um, volunteer: Rex.”

Lights swivel and converge on three figures entering the stage from stage left. In the center is a rather
disoriented-looking Tyrannosaurus Rex whose soft and bouncy form gives on the impression of a
cartoon character brought to life. He has rounded claws and his relatively small eyes look out over a big,
long snout. By the arms he is led by two ravishing blond women who smile blandly for the cameras. Rex
stumbles dumbly after them and comes to a stop between two raised stepping stools.

“What’s goin’ on guys? Is this there where the pie is gonna be?” Rex asks glancing around the room.

The crowd laughs at the t-rex’s cluelessness. Rex himself chuckles at his misstep as he begins to grow
uncomfortable.

“Hahaha. Oh Rex, thank you for coming on the show.” Grant says.

“Show? What show? What are these cameras for?” Rex says. He begins pulling at his arms, but the
women are surprisingly strong. They resist his struggles as if they were made of metal. “Wow you girls
are, heh, strong.”

“Come on Rex, don’t back out now. You were so eager to be here.” Grant says, acting put out.

“I only walked in here because the sign outside said free pie. Come on, let me go. Help! Somebody
help!” Rex says, understandably growing agitated.

Grant shrugs at his outburst and turns to the audience. “See what I mean? Whine, whine, whine. Let’s
begin the demonstration.”

Rex continues to tug fruitlessly at his arms while one of the women, holding a bottle out of his sight,
climbs atop her footstool bringing herself level with the t-rex’s face.

“Huh?” Rex mutters before the woman on his left grabs his entire snout under her arm. With his face so
restrained and his other arm held he is quite frozen, but he attempts to shake the woman off of his face.
She has quickly gotten to work though and is spreading thick glue from her bottle onto Rex’ big lips.
When they are entirely covered in the sticky substance the woman releases her grapple and before Rex
has a chance to protest she plants a hand atop his snout and below his jaw and forces his mouth shut.

“This is an important step. Make sure you hold your partner’s lips closed until the glue settles. It doesn’t
take long, but you want to get a nice tight seal. It should be almost ready…” Grant explains.

Rex can feel the glue congealing. When the woman removes her hands the t-rex tests the glue by jerking
his mouth open as hard as he can, but it holds tight. He succeeds only in stretching his trapped lips.

“Munng?! Mmmm! Ung, Unnng.” He tries again and again to pull his lips apart, but can only slightly
stretch the glue. The women remain by his side beaming and holding him in place.

“Looks like the girls left a little extra on his snout, but that’s OK. That will only make the whole package
tighter. Now, as I’m sure you know Stuck!™ glue can be safely removed with the Muteness Removal Kit
which comes with every shipment. Just make sure you don’t lose the kit. Hahaha. Alright. Rex’s lips are
super glued now, but he can still grunt a bit and pull his mouth apart. The next step aims to take away
those little freedoms. Kelly has a roll of tape here, now watch what she does.”

The other woman by Rex’s side has climbed the stool to his snout. Rex, becoming fully scared jerks his
bound mouth away from her.

“Mmnoo. Muumm” He groans through a tiny gap in the super glue. Kelly, with an amazingly strong grip,
pinches the back of Rexe’s neck forcing him to flinch in pain and swerve his mouth toward her. The
woman is quick with the tape and after rrripping off a long piece encircles Rex’s snout with it vertically.
After the initial piece she takes the entire tape roll and wraps it around Rex’s snout dozens of times
before snapping the roll away.

“There we go. No more mouth opening.” Grant says, beaming. “And you’ll notice he’s a little harder to
hear now eh? Well, check this out.”

Kelly, with a fresh roll of tape, begins to wrap tape around Rex’s face horizontally. Around the head to
the tip of his nose. The tape squishes against the leftover super glue. Rex groans when he hears the
combined adhesives stiffening into hardness. At this point the dinosaur can barely part his jaws yet Kelly
continues to unload an entire roll of tape around his head. His soft, cartoonish muzzle is soundly stuffed
into the carefully placed layers. Only his nostrils and his panicked eyes can be seen under the black tape.

The crowd laughs heartily at the images of Rex attempting to open his mouth which are being broadcast
to the screens before the stage. Rex’s frightened whimpers are barely audible to them now.

“And just like that. No more whining.” Grant says, gesturing toward Rex who can only shoot him an
angry glance in reply. “But wait, there’s more.” Rex’s eyes widen.

Grant lifts up the thick leather muzzle he had retrieved from his black case. He lifts it high for the
cheering audience.

“That’s right. You know it, you love it. The Hushpuppy™ is a Muteness bestseller. It can adapt to any
muzzle size, it’s super strong, and super thick. Here you go Beck, give Rex the definitive Muteness
experience.” Grant says tossing the Hushpuppy™ to Becky, the other woman by Rex’s side.

Rex, having spied the twisted leather device begins to thrash even more strongly. He eyes the muzzle
with fear. His mouth is already muffled by gobs of super glue and nearly an inch of black tape. The glue
in particular causes a terrifying feeling of permanence, despite Grant’s comment about the glue being
removable. Rex worries that the addition of a muzzle will truly silence him.

“MMNNN!” Rex, at his loudest, only emits soft groans.

“I’m sorry, what was that? Hahaha.” Grant says to the chortling audience.

Becky, now atop her stool stretches the leather muzzle over Rex’s broad nose. He shakes his head
pleadingly. Becky only smiles. When the muzzle completely covers his face Becky tightens the straps.
Rex pants as the woman tugs them with all of her strength. Rex’s face is squished terribly beneath the
muzzle. When the straps are as taut as can be Becky turns a key in the muzzle’s rear which holds them in
place.

Rex can’t believe the tightness. His mouth is completely unopenable. The tape would be strong on its
own, but the muzzle is very firm and the entire package is made doubly tight due to the residual super
glue.

“mmmmmmmmm” Rex groans softly. He can barely hear himself through the Hushpuppy™. The t-rex
looks imploringly at the crowd for some righteous person to help him out of the situation.

“Alright ladies let him go. There’s no way he’s getting out of that by himself. And that, my friends, is
Muteness quality.

Becky and Kelly release Rex’s arms and he swiftly brings his hands to the unyielding muzzle. His stubby
fingers and blunt claws grasp helplessly at the tight straps. He can barely feel his touches beneath the
layers of bondage. He is unsure what to do with himself so he continues to struggle at the muzzle as
Grant addresses the audience.

“Look at that. He’s speechless.” He says. “And you will be too, because right now you can buy a package
of all these items; The Stuck™ glue, Muteness Black tape, and a Hushpuppy™ for the low, low price of
$14.99.”

The audience cheers. Rex, panicking, swings his leather-bound face from side to side in search of an
escape route.

“And, if you call within the next 25 minutes we’ll throw in a second kit completely free. That’s right. Two
super gagging kits for the price of one. Can you believe it!?”

Rex has turned to gesturing the cameras which sweep the stage. He waves and points at himself with
frantic eyes until Grant catches on to his attempts.

“As always it has been a pleasure to share the benefits of Muteness bondage products with you. I’m
Grant and we look forward to hearing from you… or do we? Hehe, have a good day.”

When the stage lights die down the bull-terrier leaps from the stage and waves at Becky and Kelly. They
take poor Rex in arm again and begin to lead him offstage through the entrance they had taken.

Off-camera Grant yells “That’s right girls. Get him back to my dressing room. Hey Rex ‘You’re gonna love
my nuts.’ Muahahaha. If you want to be set free just say something, alright?” With a lasvicious grin the
dog disappears behind the exit curtain.