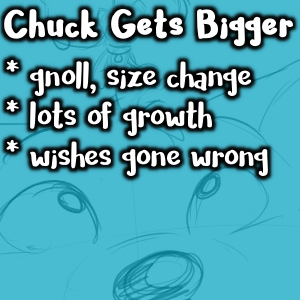 Out here in the wild lands, food was scarce and time was short. Chuck the gnoll should have known better than to have a conversation with his latest meal, as it wasn't the first time he'd come across talking food. Chuck was smaller than most gnolls; truthfully he was also smarter, but that wasn't saying much and it often tended to make matters worse. This would be one of those times.

The giant badger would feed him for days. It had fought all that it could, but the hyaenid's grip was just too much. Exhausted, the black and white creature had resorted to desperate speech.

It wasn't the first time he'd come across wish-granters, either. It never went well. Chuck should have dealt with him there and then, and saved himself a lot of trouble. And yet, some spark of imagination inspired him to listen, and consider, and agree!

"Fine. I wish to be bigger, without you twisting my words or intent, in such a way that no harm comes to me and I can easily kill you if I'm not happy with what you're doing. We good?"

The badger blinked, and scrunched its nose up a little, and whined. Yes, after a pause to consider the request, it started complaining: Chuck wasn't fair, the gnoll was a spoilsport, that sort of wish didn't guarantee the badger would be safe at all - but he ignored it. Would he get a wish, or a meal? This time, the gnoll thought he was onto a winner. His tail flicked, he watched and waited eagerly to find out.

Badger looked uncertain for a moment, before its expression changed and it gave a sneaky little grin that forced a little chill into Chuck's tail. Oh dear, had he forgotten something? The critter held onto the gnoll paws with his own, and suddenly his whole body tensed and white light flashed behind his eyes. It was a rush of magic flooding into him, briefly assaulting his senses before it was gone and he was panting, quite overwhelmed in that one brief intense moment. Feeling gently crept back into his hands and feet.

Bigger, he'd said. Indeed, Chuck was starting to grow already. His modesty rags were tearing and coming loose, his necklace of trophies and the fabric around his paws felt tight before coming off. The gnoll was soon entirely naked, save for his fur. He was certainly bigger, and he grinned toothily down at the badger as the wish power moved through him. In a short time, he was a more respectable eight feet tall. And shortly after that, he was an impressive ten feet. Chuck could feel his strength growing with his size, and the prospect of more success in his hunts was already making his mouth water.

Twelve feet. Okay, he was approaching a legendary size, even for the large gnolls of his clan. He would have difficulty fitting into their huts, like this. Chuck felt giddy from his new size, but eventually sense and reason prevailed and he looked down to the badger who was now much smaller than he.

"This is good! Very good. You can stop now."
"Can I?" said the badger, tilting its head. "I'm not doing anything. You're getting your wish: you'll be bigger. Nobody said anything about stopping, though."

Chuck snarled, feeling that he might be made a fool once again! And yet, the badger stayed nearby, within easy reach as per his wish. Paws as big as the critter lifted it up by the scruff, unkindly. Fierce teeth were laid bare.
"Sure. Do it. Then you'll keep growing and growing, until there's nowhere for you to go. But, you never know, I might be able to help you out."

Petulant, Chuck said nothing. It was bluffing, he thought; the spell would stop eventually. Then he'd be a giant, but he could work with that. These lands would change. He'd be a hero and live wonderfully. The badger would not be much of a snack, but it would be fine. He grew, and he grew some more. Twenty feet. Thirty-five. Fifty. Badger was a tiny morsel perched on his hand. They said nothing to each other, but the gnoll kept on growing.

Birds flew below Chuck's eyes, that was the first surprise. A gentle vertigo gripped his body, so he calmed and breathed deep, trying not to get drawn into such thoughts. Seventy. Eighty. A hundred feet tall. More. Badger was like a flea on his finger, and from up here he could see so much further. Home didn't look so far away with his giant strides. Big feet rested heavy on the sandy ground, leaving footprints though it would be hard to spot them as such.

Then, he couldn't feel the badger at all. Couldn't see it. That much did panic him, for as much as Chuck tried to believe it was a bluff, he simply didn't feel that confident. If the critter had fallen off, or if idle movements had damaged it; he didn't want to think about what might happen. Relief returned as a gentle whisper entered his ear.
"Just getting somewhere you can hear me. Nervous, are you? I bet. I'm not kidding, you'll grow as big as these whole plains. You'll have to leave. You'll never be full again."

Minutes passed, and Chuck's ears grew cold. Hundreds of feet. Thousands? The edges of clouds began to make his fur wet, and his nose felt terribly cold, and the air felt less satisfying. All the food he could catch certainly wouldn't fill him, and that was the worst feeling. No, he couldn't go on. He would give up.
"Okay. Fix it, please. I'll do whatever you want, just stop it."

And Badger laid down his terms; he'd undo his spell, and then he'd be off, and if Chuck did stumble upon him again then the two would simply part ways once more. Not food, not now or ever. The gnoll huffed, and sighed, and relented; it was to be so. The shrinking was not as pleasing as the growing, though each passing second made him feel much calmer.

The stripy critter had left before Chuck had even finished returning to his usual runty size. Bundling up his rags and tying his trophies around his neck once more, the hungry gnoll continued his search for food.

The giant porcupine would feed him for days. It had fought all that it could, but the gnoll's grip was just too much. Exhausted, the spiky creature had resorted to desperate speech.

It seemed obvious what he should do, but Chuck felt inspired. Having learned from his last misadventure, surely this time would be much better. Wouldn't it? 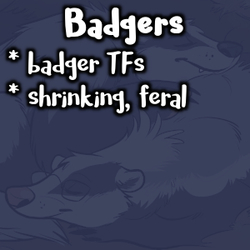 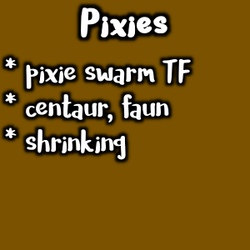 From Feb-April 2018, a little gift story for Buckdasystem. Tagged for getting bigger, and receiving a technically accurate wish. Can't trust those magical critters. :P