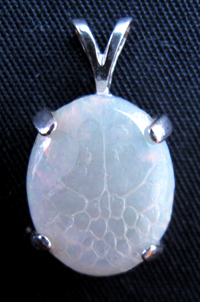 I had in mind to make a custom piece of jewellery where some of my corn snake's shed skin was laid over a piece of white opal and this is the result.

Process-
After considerable searching I managed to obtain a nice flat oval piece of white Australian fire opal for the base. The opal is 11mm x 14mm.
My corn snake Little Prince follows a very predictable time scale when he's in blue; so I was able to collect the shed skin shortly after he sloughed it and to put over the opal while it was still damp and stretchy. The bit of skin used was from the back of his head/neck where there is a nice variation of scale shapes. The skin was secured with a bit of Araldite.
Once the skin had dried out it was sealed with a couple of layers of thin white glue (as per the resin instructions).
Finding a suitable resin that was resistant to yellowing and available in smaller amount in this country proved to be the biggest challenge but eventually I was able to get some. I have never worked with resin before so this was the most nerve wreaking part of the process, esp as I'm very clumsy so likely to bugger it up. After doing a test I applied a layer of resin to the front and side, once that was dry I then applied resin to the back. There are some small bubbles which I didn't notice until dried and a few rough patches (because I totally knocked it over when the resin was drying cries) but fortunately they are not very noticeable.
The piece was then set in a pre-made silver pendant setting. I wasn't expecting the opal fire to show though the skin but you can still see flashes of it which is a nice bonus!
It's a long way from being perfect but I'm happy with the result :)

Time/costs-
Done over 4 months. I think the biggest part of the time spent on the project was source the materials needed, it ended up taking several months to get all the bits together to make this.
Material costs- £80