"Mommy? We there yet?" asked Sarah, looking out the window of her mother's car.

It was the day of the spring celebration at Sarah's little sister Ariel's school. Although many of the children were younger than Sarah by at least a year or two, the preschool director let Sarah come just because Ariel was enrolled, and Sarah declared herself as, "The bestest helper in all history!" adding in, "I'll be really careful 'round the little kids too!" Sarah loved helping the younger kids at Ariel's preschool. They were all so cute, and she was able to be in charge of what to play.

Once they pulled into the colorful, mural-covered school, Sarah immediately saw a lot of fun things to do! There was dress-up, a dunk tank, and even a bounce house! Sarah adored bounce houses.

As Sarah struggled to get herself unbuckled out of her car seat, her mother opened the door to help, afterwards moving out of the way of the wriggly kitten. As she made her way toward the bounce house, the preschool director called Sarah's name.

"Uh-oh," Sarah thought. Was she in trouble?

The kitten made her way over to the preschool director, a slightly overweight and very kind moose woman, who was holding the hand of a wolf pup with messy, long brown hair.

"Hello Sarah! This little wolf pup is Katelyn," she told the kitten, gently nudging Katelyn to come closer to Sarah.

"I four, an' I got light-up shoes!" Katelyn stated, stomping her shoes on the ground to show Sarah how they glowed.

"Can you be Katelyn's buddy for the day, Sarah? I'm sure she would appreciate it!" asked the preschool director.

"Yep-yep!" Sarah giggled, leading Katelyn over to the dress-up station.

"I thought we could play super spies." Sarah replied.

"But... C'mon! Super spies is almost exactly like hide an' seek!" Sarah whined. This whole "being Katelyn's buddy" thing was not off to a good start. Sarah thought that she was supposed to choose what games to play, not Katelyn!

Katelyn gave Sarah the stink eye, which was a look that Sarah's sister often gave the 5-year-old kitten when she was being bossy. Sarah gave a heavy groan, because she wanted to play super spies SO much! Suddenly, an idea sprang into her head. Mommy told her about taking turns... Maybe she could negotiate with Katelyn so that they could both play their games... Sarah's game would be first, of course.
"I was thinking... You wanna play super spies and then horsey? That way we can take turns and it's more fair." Sarah said.
"You're not fun." Katelyn stated bluntly, folding her arms.

Sarah took offense to this. Her lip begin to tremble, and she started to cry. The little kitten thought she was being totally fair! Not to mention, "super spies" was only the best game she knew. "Horsey" sounded like a baby game. Sarah ran to preschool director, and Katelyn trailed behind, knowing that she was supposed to stay with her buddy, even if she was not being any fun.

"I wanna play super spies and Katelyn wants to play horsey. And she called me no fun!" Sarah whimpered.

Katelyn plopped herself onto the ground behind Sarah and began to draw in the dirt contently.

"Oh dear...." sighed the preschool director. She was not anticipating this.

She wiped off Sarah's tears and got down to her level, putting her hands on the kitten's shoulders. "Why don't you try a new game? Horsey can't be such a bad game now, can it?"

"But it sounds like a baby game..." Sarah pouted.

"I play it. And I notta baby." Katelyn piped.

Sarah sighed. She knew she was not going to win this. Her tail swished sound she tried to think of an idea. Suddenly, it hit her like a ton of bricks!

"Katelyn! How 'bout we play super spy horseys?" Sarah asked the wolf pup as she drew in the dirt. Katelyn's ears perked; it did sound like fun! She bobbed her head up and down.

"How clever of you, Sarah!" The preschool director praised, patting the kitten on the head, "Now go have fun on your mission, little horses,"

"Neiiiigh!" Katelyn shouted, nodding her head as Sarah led her back to the dress-up station. 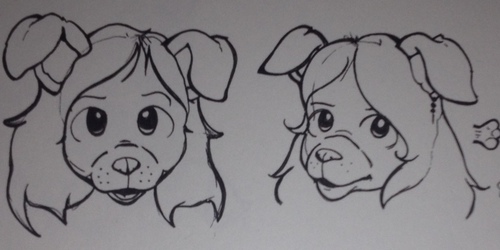 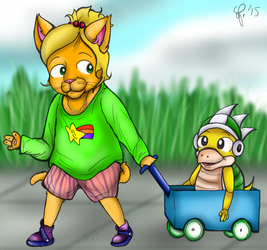 A little something I wrote about Sarah and her little friend, Katelyn.

(I suppose it also shows a bossy side of Sarah, as most kids are to the ones that are younger. She learns her lesson, though.)