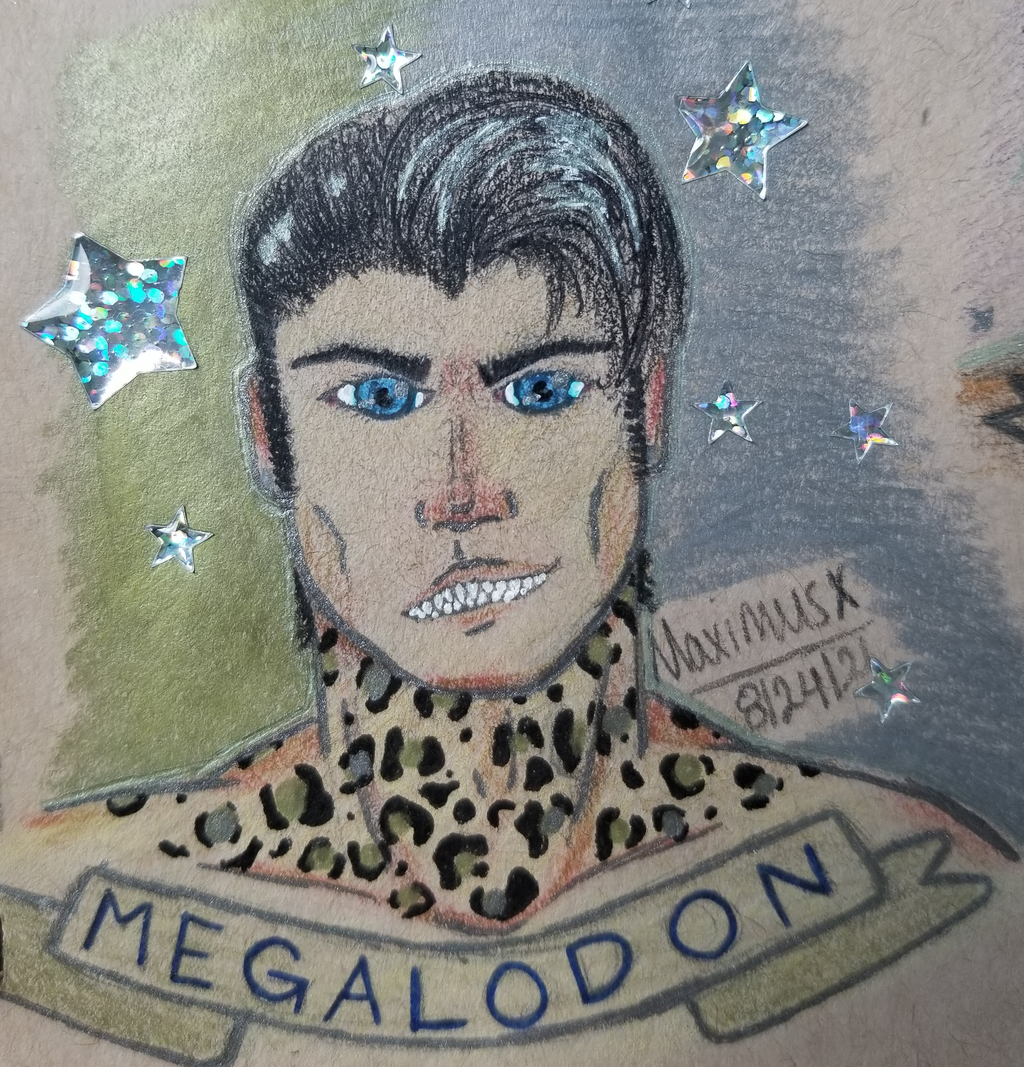 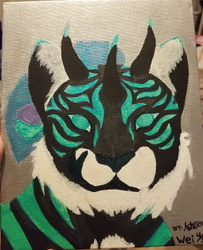 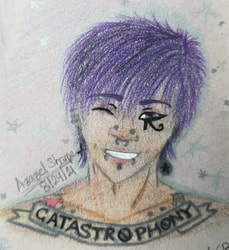 If you like and want to see more art of my character Max, please give him a fav!

Years and years ago before I even came out, I made up this guy, X, for a role play I was doing on an RP site I'm no longer on. You can see his very earliest rendition/version on my old DA here if you're curious about how much him and/or my art has grown. He always did have the same neck tattoo featured here, but I just didn't know where to begin drawing details like that in middle school. So woo hoo for developin' them art skills, becase this is the first time he's been drawn with his legit ink! He's also grown up a lot since that old RP, and become one of my top 5 personal favorite OCs surprisingly.

His oldest version put him in a story where he was a mental asylum patient, but instead of being in a legitimate mental ward, he was put into some sort of puzzle/test thing with other people also suffering from severe mental disorders. OG X gave himself shark teeth long before waking up in that environment, and had little character development beyond "Scary, crazy street rat with shark teeth and a beanie."

As a fun hobby, my wife and I write stories and do our own written RPs in our free time. I decided that I have so many characters already, so instead of making up a new villain I decided to introduce our boy here and I tossed X into our stories. Well, as we wrote more and more and he developed into a dimensional character, both the OCs in the story and us as writers completely fell in love with X, and we didn't have the heart to continue the story with him as the villain anymore. We've since re-written and revamped this story and X has grown up so friggin' much - it's as insane as he is haha

Now, current version, he has a full name - Maximus Aurelius X - and a whole life outside of his experiences as a mental patient, which also have dramatically changed from his original RP (he's no longer in the same setting/world altogether). The basics of his character are all still in place, with him still obtaining the shark teeth in his youth, his favorite hat being his good ol' brimmed beanie from his OG version, his base mental illnesses and struggles (OCD, cannibalism, and schizophrenia), and of course, as mentioned, he still has the neck tattoo I failed to draw in older versions of him. Pretty much everything else about him has been nixed or changed entirely, and far too much has been added to his character development to go over here. If you're intrigued by his personality and history and you'd like to learn more about him, he's got a profile on Toyhouse you can certainly give a look-see too.

I was so intimidated to draw him at first, because Max is a bigass dude with muscle and a really square, masculine form. For many years, I've had a "go to" shape for men (and women) that's basically just your typical anime bishonen dude - a guy with a thin face, pointed chin, lean form, basically an attractive pencil of a man. These past couple years and within my Iron Artist challenge, I've tried really hard to learn more about and practice better anatomy so that my people don't all just look like the person with different colored eyes/hair and I feel as though those lessons have paid off very well with Max here, as well as my other Iron Artist pieces. I'm still intimated to draw him full body, but much less so now that I've successfully given him a bust and facial structure that's not as cookie-cutter as a lot of my art used to be, particularly when I originally made him up. I'm very proud of my growth as an artist, not just with drawing but with writing and character development+design too, and I feel like Max is such a great example of that all around!

Feel free to offer some constructive critique so that I can improve in the future!
Known flaws: Please keep in mind that the original piece is like 3-4 inches big. The shininess in his hair was experimental. Originally I did it by leaving the space empty, then I filled it with white gel pen but that was too bright so I tried to tone it down with pencil and that looked muddied so I went over it again in silver gel pen, and now it just looks messy. Like a human, he's not perfectly symmetrical either; eyes and eyebrows are a touch off. That's ok, pobody's nerfect.

To find links to all my online accounts, see my carrd:
https://ashestoashcraft.carrd.co/

To support my work, consider buying me a pinch of stardust on ko-fi:
https://www.ko-fi.com/ashestoashcraft