The eagle was nowhere to be seen in the halls, leading Arrow to believe that another instructor had taken the eagle aside with a reminder not to linger idly in AGATE facilities. Idle time was meant to be spent in personal quarters or in other mandated areas like the recreation hall, not in the hallways. One could get in trouble for idling too long where the instructors could catch you.
That worked out for him, and he reached his quarters unmolested. The assignment on his datapad took little time to complete - essays were easy enough for him, even in the abbreviated, punchy-style that the instructors preferred them to use - and he sent it off to languish in cyberspace until the instructor had the time to receive and accept it. The red-tailed hawk laid down in his sleeping tube, folding his arms over his chest as he looked at the ceiling.
He was...not quite anxious, because he had made a number of plans for the eagle. For Berrak, he revised his thoughts. The eagle had a name, and that was better to remember rather than the species. One dehumanized an enemy at their own peril. It made one think of them as other, as weak, as less than themselves, and that was a good way to open oneself to stupid mistakes. No, he had plans for [i]Berrak,[/i] so he wasn't anxious about their eventual meeting.
No, it was more of a feeling of wistfulness, he supposed. He would have preferred that they didn't reach this point, but it was clear that Berrak wasn't going to leave him be. The eagle was too interested in Runout, in getting his grades up through the physical exercises rather than the classroom ones. If he could get away with not doing them at all, he probably would have.
And that had to stop, because Arrow was [i]not[/i] going to waste his time doing someone else's work at the expense of his own.
He closed his eyes. Tomorrow would come soon enough. If he was lucky, he wouldn't have to deal with Berrak until the afternoon meal. If he was unlucky...
Well, he would deal with that, too. There were ways. There were always ways.

He was unlucky. Arrow opened the door to find the eagle waiting for him just outside, narrow eyes pulled to slits as Berrak glared at him.
"You didn't come out yesterday," the upperclassman muttered.
"I was busy studying. You were the one that started breaking the rules."
"Don't give me that. We agreed to a tutoring session."
"It must have slipped my mind."
As a matter of fact, it hadn't. Arrow had been taking care of his own studies for a change, ensuring that he was caught up on next week's lessons before they came around. He had given Berrak the - now obviously undue - credit that the eagle could take care of one night's homework without help. Apparently not.
He ducked his head, sliding past the other male's feathered arm. As soon as he was in the hallway, Berrak grabbed his shoulder. A little shift to the right kept the other raptor's thumb from landing on the sensitive nerves, keeping it from becoming a nerve pinch problem.
"You listen here. I need tutoring. You agreed."
"I agreed you needed it. Not that I'd provide it."
Arrow was rather surprised that he had managed to stay this calm. Inside, his heart was racing, his lungs rapidly expanding and compressing. He was all too aware of his own biology hitting the Fight or Flight stage, his talons clenching, or trying to, against the floor. His feathers were on the verge of rustling up, but not quite. The jumpsuit kept most of them flat, hid the fear-reaction from the other student.
[i]If he pushes, kick back, slightly high. Aim above the knee instead of under it; lock it, spin, catch the other knee as he stumbled forward, pull him down.[/i]
It was the easiest way to strike back when you weren't facing the other person and had this much distance. It would also put most of the eagle's vulnerable parts in easy range, and without much ability to defend them. If there was going to be a fight, it would be finished quickly, or so he hoped.
"You trying to put that brain to work with that beak? Don't start getting a smart mouth with me, Cadet."
"I don't have to try."
"...We're getting off-topic. I brought the datapad. Get that essay done by lunch, and then -"
"No."
"What was that, Cadet?"
The grip on his shoulder tightened. If it had been in the proper place, something that Berrak obviously believed that it was, then it would have been delivering agonizing pain to the nerve cluster in the shoulder. As it stood, the fingers were just pressing down on different spots with uncomfortable but not quite bruising force. He gritted his beak together that much tighter, taking a moment to collect his words.
"I am not writing your essay."
"You little -"
"I'll point out the information you need, but I'm not 'helping' you anymore."
"Why not?"
"Because you don't want help, you want someone else to do it. I'm here to make it through AGATE, not get someone else through it."
"What about the whole comraderie thing?"
"Say that to me when you actually have something to offer. This is a meritocracy, remember?"
The shove that he'd been expecting came, and before the next blow could follow, he swung his leg out just as he was waiting for. Back, up, turn on the back talon. The impact that he expected followed, feeling the slight curve of the knee under his foot - almost too low, he realized, could have broken the knee rather than locked it - but kept turning. His spur caught the back of the eagle's other leg, pulled -
THUMP!
And then Berrak was down, beak slammed against the floor. As trained, Berrak was rolling to the side, trying to get up, but Arrow followed. Most Mod Buteo species were trained to fight with their legs if they weren't using a weapon, considering that their talons were some of their most dangerous natural weapons, and so the next blow was a pulled kick, one that snapped down just over the other raptor's neck. It wasn't hard enough to cut breath or break skin, but it was a hard, stunning blow.
Other students that had been making their way from quarters to classes paused, staring at the short fight between the pair of them. The hall was filled with students in jumpsuits, not yet dressed in their more formal clothes, and some were not quite fully dressed, zippers down along the chest here and there. The whole thing reeked of a dorm that hadn't quite come to life yet, and everyone had that same look on their face, wondering if they were still sleeping, if this was some sort of dream.
Arrow was one of them. He had expected a stronger fight, had thought that his face and chest would be a mass of bruises after the confrontation. As it stood, he was standing, but for how long was debatable. Someone was already slinking off, likely looking for an instructor. The red-tailed hawk knelt down, shaking his head.
"This is done. No more."
"..."
"Glad we understand each other, Berrak."
He stepped back, adjusted the slight fall of his zipper along his chest, and hustled along. He didn't want to be late for class, nor did he want to be there when the instructor finally arrived.

Summary: The Academy Days of Arrow Quincy Vershaft continue, with the bully from last time paying a new visit. 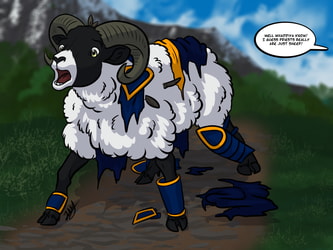 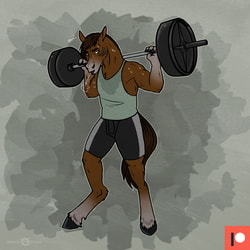 A sequel to the original Academy Days story, picking up where that one left off. Arrow has to figure out how to deal with the bully who wants him to do his homework.