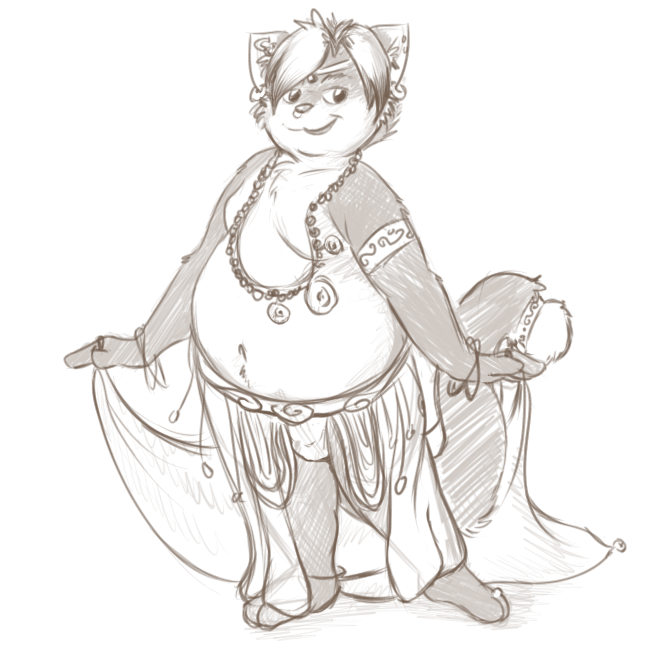 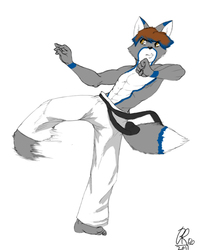 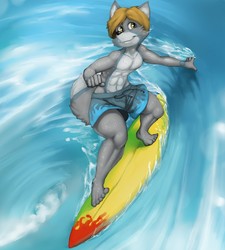 This is a Midnight Challenge from tanukisan tanukisan to turn Ark into a dancer! While he's been a dancer in the past, nothing was quite like his night in the desert...

The hybrid wasn't nervous anymore. He just shuffled a bit in place, waiting for his signal. The mood was set, and he was the final act, a headline that was sure to please, said the fox in the suit. He centered himself, still running through the dance in his head to make sure he knew exactly how to make his entrance. He never thought that his body would flow so magnificently with such slow, powerful force. His prior movements were sharp, quick, and liquid; now heavy, strong, and still just as graceful.

"And now, to cap off your stay here in the desert, I bring you Akkeresu, Master of the Heavy Heat!"

The catox was still in disbelief. His body had just been wrecked from the Dipsea, a Behemoth-class trail race whose tricky paths and massive elevation changes would break the will of many participants. But, Ark was one of many finishers who took the Suicide route and managed to survive, coming in way ahead of the pack. He was already back in Texas thanks to the airline bringing him back from Colorado, and in company of his friends. The buffet was destroyed, and partly thanks to his equally ravenous companions. Numerous other hybrids and creatures of all types had pretty much eaten the whole restaurant empty, and Ark sported a drunken food-baby that was packed firmly around the catox's midsection. Thankfully, sleep wrapped him fast, and left his body to rest...if it weren't for 'San, the tanuki that often drove him and others to such levels of gluttony. Very quiet for such a sizable tanuki, he worked his way into the hybrid's room and revealed the furred swell.

"Heh, now would be a perfect time for that silly 'tox to pick up dancing." The large creature though to himself, taking a fresh green leaf and placing it atop the tummy, waiting for it to merge. As soon as it did, Tanukisan quietly slipped out of the room before his presence was known.

Ark blinks his eyes a few times, not even having his mask on as the sun bathes his form. Uncovered from the night, he moves to stretch his body from ears to claws...

Downstairs, the group arranged at breakfast as they all discussed the upcoming party, known as "Masters of the Night". Each performer had a skill ranging from Flex, Strength, Speed, Combat, and Agility. Practitioners of mixed martial arts, contortion, extreme sports, and many others shared their abilities and sought to give the best show possible once a year in the summer. Others helped with drinks, food, and other services, but the party was already prepped and up to start.

"Well, we need something for the bigger crowd too! I know y'all enjoy it, and we're gonna have others who are looking for bigger performers!" the fox said, tail dancing about with a certain agitation. His suit was already showing drops of nervous sweat, having lost his lead for the act.

"So, why not Tanuki?" Chase remarked, taking a sip of tea as he looked over.

"I thought he was managing the booze, right?" Drenthe said. "Speaking of booze, anyone seen Ark?"

Tanukisan was quick to respond. "I don't think you'll need to worry about the cat-fox...or your heavy hitter~" That glint in his eye shone as he flashed a grin.

The coon's tail stuck up like a bottle brush from surprise. "Damnit, did you fatten him up again? I'm still sore from the last incident, 'San."

Meanwhile, the other members all begin laughing, Ace stifling his own as he tries to speak. "HAHHH, oh god! Did you really make him the fatox again?"

"He's not that big, but I think he'll be just right for your Heavy act." The tanuki just took another sip from his glass, the sake already wafting through the dining room while thumps pounded from the upper floors. Soon, the catox was stomping down the stairs.

“There’s no way JUST the food did this. I’ve got more traaaahhhHHHH!”

The hybrid made his way to the bottom of the staircase, though more rapidly than he anticipated. He tumbled forward, shifting a leg into place and cranking his heavy tail like a counter-balance. Arms curling inwards like a ballerina, he made his landing, spinning to keep himself stable, and eventually slowed down. His new gut wobbled ominously, red underwear creaking from stress as he held both arms out for pose. The room burst into applause and the fox stood back up, unable to believe what he just saw.

"AKKERESU. You're our new Heavy act. We need a dancer, tonight. You're the only one with the agility and experience to do it!" The fox made a slow clap as he rounded the table and approached the catox. Ark is still surprised, noticing his body is actually rather balanced, which explained the natural movement, even with the added 150 lbs on him.

"Wait, I...uh...I just finished a Dispea...but....I'm not sore...sure?" Ark nervously responded as the fox examined him from front to back, a paw occasionally gripping a section of fat or hidden muscle. A blush quickly crept over his head and ears, eyes looking to Drenthe.

"Of course you can do it! You're the only once with any good dancing experience. You did that one night special at the Black and White in the Keys, and you've been dancing across those trails for years now! " The coon set his coffee down and strode over to the catox, hugging him firmly as he gave the warm cheek a kiss. Both tails settled down as they twined together. The two locked in place for a moment as the raccoon leaned in to kiss his husband back. "I love you, but you don't have to do it."

"Hehe....I can't refuse that. You know I enjoy being like this on occasion." Ark leans in and stays snugged close to his raccoon.

The scene stayed like this before another sound cracked the relative silence; a screech and a few wing-flaps from outside. Nothing appeared at first, but soon, a large bat fliped down from the roof and pushed himself through the screen. Balls of the strange bat all flapped and squeaked about as a few members of the table tried to get up, but the swarm merged to form a brown fruit bat, dressed in a black tank, green surf shorts, red Converse and signature white gloves.

"Oi! It's already 9 o'clock! You need to get your fat butts over to the site so we can finish the last prep! I've already harvested all the fruit for you, and y'all aren't even done stuffin' yer faces!" Jasu exclaims as he bared his fangs for a moment.

"We're workin' on it! We just got ourselves our Heavy dancer for the night, 'bat!" The fox yelped back from partial surprise.

"Good! Then get the catox rolled over there! The boss wants us to have everything done early. I'm out!" And with a flap and a cartoonish zip, the bat was gone.

Everyone gathered up and got their things together, all grinning ear to ear. It was going to be a long day, and the show was just getting started...

Ark hears his cue, and makes his way out on stage, sliding through the curtains with a spinning knee slide, powerful legs driving him back up as he accelerates him to the center of the catwalk. The music starts cranking up, a mixture of classic Middle Eastern sounds and modern drum and bass, the hybrid in perfect sync as he shifts back up. He moves in time, the gut giving a slow, hypnotic wobble as his hips and limbs begin to shift about.

His body showcases assorted golden rings across his ears and hands, a veil attached along with various bangles on his wrists, ankles, and another on his upper left arm. Another sits on his tailtip, the fur-trimmed for a more cat-like look as it whips about with the new counterweight. His cloud-like belt shifts with other sheer cloth, revealing nothing more than a deep blue thong to support his still well proportioned bulge. Other glittered, shiny decorations shift and move with each hard step, hips driving back and forth with each line of bass dealt through the sound system. His headband reflects the crowd as they cheer him on, each step keeping his body in perpetual motion. His soft, white chest danced as equally well as his widened feet, especially as he drives his body through more aggressive maneuvers. Each lock and jump moved his gut in new directions, the long necklace jingling along with the music.

And just as quickly at the set started, one last drop hit the amps, Ark giving his body a shift forward as he spun and slid into a half-kneel pose, baring all of his body for the crowd as the song closed. The crowd roars even louder than it had been, everyone standing tall as the large hybrid stood as well,bowing forward, allowing his belly to shift forward and hang. He blows a kiss to the crowd, his close friends and Drenthe winking or yelling back in joy. He turns on his feet as he stands again, hips shifting back and forth to let his dense, heavy rump wobble, tail flagging tall and swaying seductively as he makes his exit, the warm, dry night smiling back at him as he raised both hands in approval.

The night had been mastered on all fronts, and his cat-like grin simply solidified the mood. Nature smiled back and left the oasis aglow.