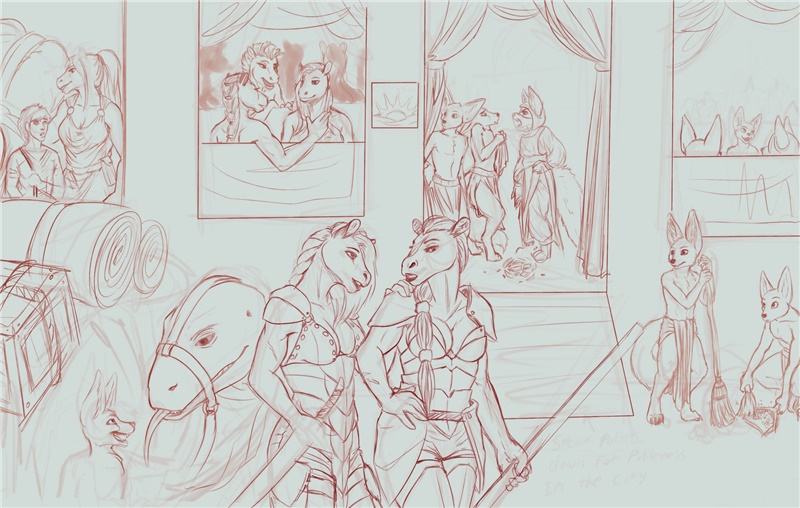 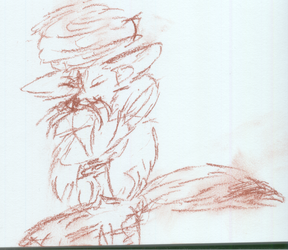 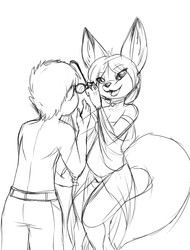 Kalid ( kalid909 @ FA ) is working on a street scene for me.
It shows a street in an Amazone-Fennekim town, with a caravan just having come in.

The guards already got into the tavern - it's those three ladies visible in the taverns window - and the cityguards in their light armor took over.
As usual, the tall ladies attract the fennekims attention.

One unfortunate fennekim waiter dropped a mug and now has the full verbal attention of the taverns mistress, whilst his colleague peeks into the booth the amazones acquired.

On the right, two street cleaners stop their work for a moment to enjoy the view the amazones offer.
Center front we have two of the town guards, or maybe caravan-guards, but in light armor. They would be lizard handlers, their lighter armor needed mostly to prevent accidental injury from the clumsy lizards.

Left / behind them, we see a pretty happy fennekim. Like the amazones a lizard-handler, but with his agility not needing any protective clothing.

How he got the attention of the lizard?
The lizards like sweet fruits, and fennekim often carry some with them, as also amazones love them. And when one fruit is not so delicious looking, well, lizards don't care for looks. So most likely the fennekim just gave the lizard a treat, so that the lizard will stay more calm.
Which will allow the fennekim to enjoy the view of the two amazones better,
They're heading the caravan inside the town to remove obstacles from the draftlizards way.

And when you look to the upper left of the picture?
Yes!
The vetenarian, an experienced amazone, is checking over another lizard, clearing it to enter the town center. Injured draftlizards are unloaded before the inner gate and lightly sedated, and brought to one of the grassy patches in the entrance area of the town where their injuries will be taken care of before they're brought through the towns heart to the stables.

Her young human apprentice, who for the first time accompanies her and who never had seen the proceedings of a caravan arriving, is cleary distracted.
He never saw heavily armed knights undress so swiftly, abandoning their armor at a taverns entrance and then scamper, undressed, for pints of spiced water and light beer.
Let's hope that some fennekim primed him that he's not staring at the undressed amazones, but at, for example, the astonishing amounts of water they can drink.

Well, the water is cleaned by running through sand-filters and then stored for days in zinc-plated bassins before being run through the stone aqueducts inside the towns fortification-walls for distribution inside the town.

As a result the water does have much more "flavour" than what we humans consider tap-water for drinking.

Likewise, due to the hot climate, the zebra-ladies drink quite a lot.

When you ever thought that these "Stein" beer-glasses, like those seen at the Octoberfest, are excessively large, think that for the 8ft tall ladies those glasses are what you and I would consider proper for a cup of mocca, maybe a cup of coffee.

And then scale the amounts they drink to the hot climate.

Now, we know all kinds of juices, teas, softdrinks and other beverages.

With the amounts the amazones drink per day, their agrarian and industrial capacity would be pretty much exhausted when it'd have to "manufacture drinks".
The idea is simple, and was very common in the medieval ages:

Using a drip of lemon, a crushed leaf of mint, a squished slice of orange, something on that level just gives the water sufficient flavour to cover the flavours that may have accumulated by their "Imperial Rome" level of know-how on water-purification.

That way the water is inviting to drink - doubly so as it is rather cool. The walls insides never heat up that much, in part as they serve as evaporation-coolers to cool down the entire city using as-of-yet unprocessed water for this, so the aquaeducts remain also pretty cool.

As a net result, the water you get is cool and thus refreshing, and will have a light flavour, be it fruity, sweet, sour or bitter, depending upon taste.

This making drinkign the needed amounts of water much easier.
You bet, kidney-issues are totally unknown for them.