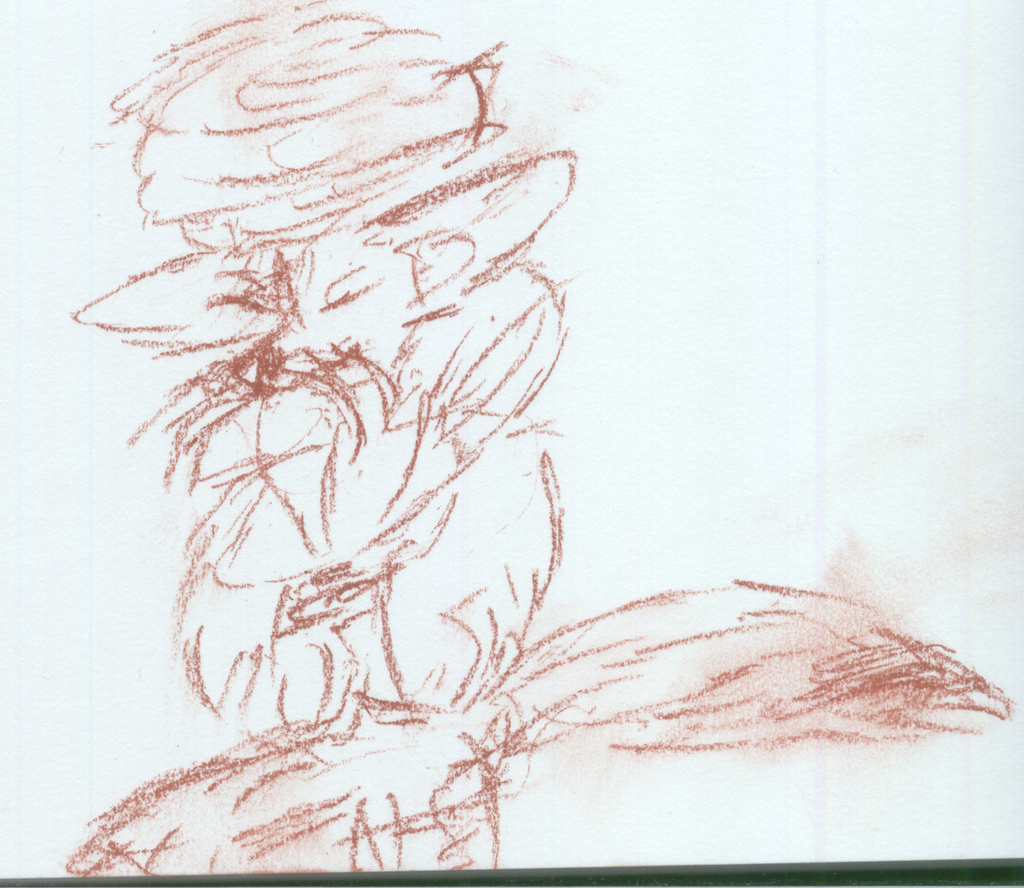 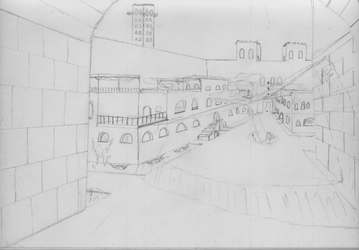 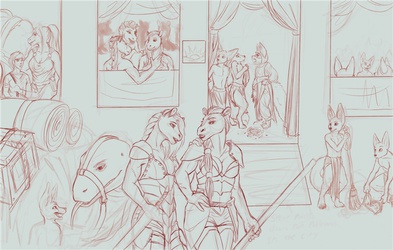 Here we see one of the fennekim wazirs during an important political debate.
Most likely he's deeply asleep, dreaming of honey-steamed grubs or candied fruits.
The large turband, in the color / pattern signifying the ministry or town he's representing, is lacking a cut jewel in its center, so most likely he is just a normal wazir representing his sultanate at the caliphas court.

His silken robes long and high neck allow him to lean his head back against it, so that his head doesn't loll around in case he falls asleep.
With his whiskers mostly drooping, he must be of advanced age.
Most likely he's an honored member of an important towns guildmasters.

Wazirs compare to both head ministers of ministries as well as to senators.
Each sultanate elects it's wazir from the consorts of the Sultani to be sent to serve under a Calipha.
A wazir represents his sultanates interests ( "You see, we have those real great artificers there, they could do some neat things, but say they need..." ), and secondarily his sultanates industrial capabilities ( "We know how to do that, it shouldn't be much of a problem" ).

This is somewhat opposed to the caliphas advisors ( themselves amazones ), who represent a sultanates military ( " we can sustain these losses for about another year, after that the situation will get critical for the town" ) and economical capabilities ( "We can afford this much now, and are able to sustain that much over the coming 10 years" and:
"We have 15 fennekim artificers able to do this at a rate of about 5 items per week. The danceress guild might apply some influence here and there, which should result in about 100 more fennekim engaging in this business in the coming 3 years, boosting output accordingly" )

The effective main activity of the wazirs is to organize parties, inviting guests, providing accidentally a lot of the social glue that makes every fennekim, even those living in the fennekim sietches deep in the deserts, feel as part of the sultanates.
And, by happenstance, also make humans and tigers enjoy and love the sultanates.

All declarations, all orders, all expeditions or missions ordered by the calipha are monitored and headed by a wazir, which the calipha appoints from the ranks of the general / unappointed wazirs. They are ceremoniously sworn in to the task, and accompanied by one of the caliphas advisors, see to it that the orders of the calipha are suitably taken care of.
Thus they provide the bulk of her diplomatic staff, serving as her envoys.

The grand wazir as well as those wazirs that are to be heads of ministries, are elected by the Calipha ( advised by the representants of the danceresses guilds ).
The Grand Wazir wears usually a purely white turband, adorned by a diamond or another, clear, cut jewel, which is to represent his clear thought and brilliant mind.

Their clothings colors are best described with terms such as "orgiastic", "colorfull explosions" or "was that an accident or intentional?".
After all, their turbands identify them sufficiently to make sure who's speaking.

-- Wazir rank, yet not wazir: The Calipha Battlemate --

The battlemate of the Calipha is not a wazir.
He's however not exactly a "Caliph" either.
Most refer to themselves as protector, the title they got when they were appointed to guard their tall ladies life, those honored as knights call themselves knight-protector.
A (knight-) protectors dress remains that of a common protector.

Although, as the protectors of the caliphas, the best artificers of the sultanates created a wide range of clothes and armors for them over the ages.
Meteorite-Steel, thin like a parchment, light as leather, but harder than the normal amazonian platemail, decorated with the opalite the fennekims love so much for containing all the colors of creation, form their armors in those times the Calipha heads to battle herself.

For ceremonial uses, many stick either to their own armor, well maintained and cared for, but showing proudly all the damages the armor took in the battles they fought, or to a white tunic, with an opal as a locket.

In short, for the protector of a calipha only one thing is really important:
He remains the caliphas battlemate.
As such her protection and welfare are and remain his primary duty - and the caliphas duty are the sultanates, so...

In the thousand years the allied sultanates exist in their modern form, it happened sometimes that the caliphas battlemate applied a sound beating to specific wazirs, which then were all-too-happy to retire and have a replacement sent to the Caliphas court.
Likewise, the primary envoy of a Calipha to be sent to negotiations, typically with the Tribes or large bands of desert raiders, is the caliphas battlemate.