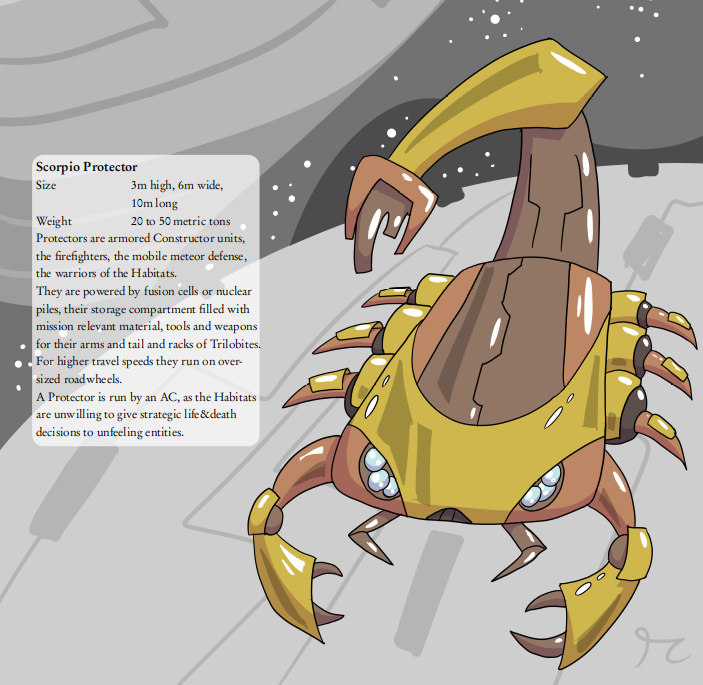 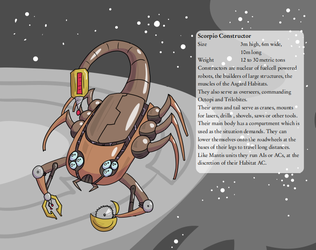 Military Modifications to the default Scorpio chassis:
The entire body of the Scorpio chassis receives add-on armor plates, the legs are replaced with shorter, sturdier ones.
Also, there are larger roadwheels to carry the increased weight.

Mobility System:
On smooth surfaces, the Scorpio lowers itself down onto the roadwheels that form its hip joints, allowing for high speeds.
On rough terrain the legs are used to walk.
Each leg-tip can unfold four claws to hold or manipulate objects - intened to hold on to surfaces in zero gravity or work overhead in low gravity environments.
Additionally the claws can be magnetized to allow the Scorpio to move over metallic surfaces without slipping.
If needed, the utility arms assist in moving around.

Work System:
There are two utility arms and the tail that can equip different types of weapons. The default loadout consists of lasers in the arms combined with heavy cutters and a plasma lance on the tail. The cargo compartment contains stacks of up to ten Trilobites with military grade loadouts as well as the plasma reactor or plasma cell for the tails plasma lance.
To handle battle damage, there are up to a hundred Octopi loaded, which are controlled by a separate master AI subsystem running on an armored computing module stored also in the cargo bay.

Control System:
Scorpio Protectors are controlled by ACs. To prevent the slower thought processes of the AC to impact the Protectors reaction speed, the AC is doing the planning, giving the AI subsystems of the Scorpio chassis each its separate tasks and goals.

Notes:
Almost all Habitats have a few Scorpio Protectors that, with their Trilobite attendants, constantly stay at the ready to shore up the fixed meteor defenses of a stations.
They are also sent to inspect anomalies, themselves staying as far away as possible, sending in some Octopi for close in analysis before making further decisions.