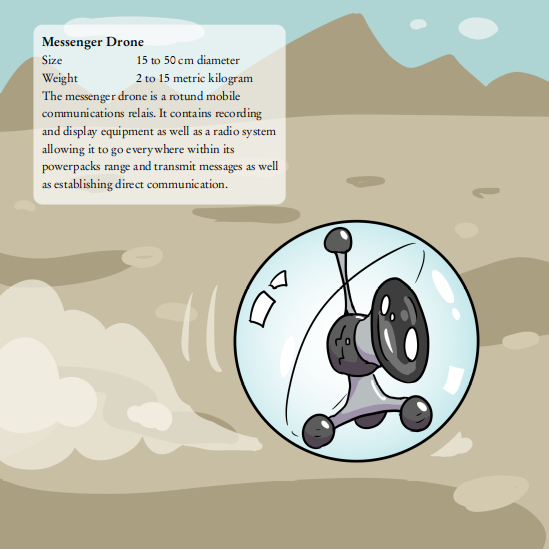 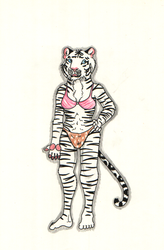 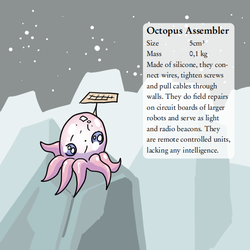 Messenger drones are used to contact somebody not reachable by other means, or to establish a video conference at any location and time.
They are just smart enough on their own to search a given area for a person, identify that person (by voice, name, visual, codeword, ...) and to then either replay the message they carry or to establish a two way communication.
Communication outside a habitats direct coverage is usually established by a group of drones, creating a relay chain to the recipient.

Habitat ACs can take direct control of a drone to project an image of their avatar for direct communication.

Messenger drones look like a hamsterball for a reason:
That way they can cross water, ice, sand and other surfaces, even at high speeds, without their insides actually being exposed to the outside.
They move around on the inside of the ball and with their heaviest parts being located between their three drive boulders, force the outer ball to roll forward.
With this odd drive mechanism, they can get up to plain hilarious speeds. On flat surfaces they can exceed 100 km/h on a straight run, though they aren't exactly able to make tight turns or brake swiftly then.
For this to work, however, they need gravity.

Their large optical lens contains both a set of cameras as well as a laser projector. In athmospheres, they can make sound by letting their shell resonate and receive sound by measuring the vibration of air molecules on their surface with a laser.
In airless environments they can switch to the standard frequencies of Asgardian equipment, or scan a wide range of frequencies, trying to sync signals they find to visual keys.
They can also utilize lipreading of-sorts and display messages as text which they can project onto surfaces with their optics.

"Wild" drones:
A pack of solar powered messenger drones were lost when a micrometeor destroyed a containers guidance systems and the container crashed.
The drones broke out of the destroyed container when, if by pure chance or by their analytical software trying to make sense of the situation, the drones formed a pyramid and most of them crawled out of the container.
They roam Asgards airless surface to this day, staying away from digital transmissions. Instead of wearing out and decreasing in numbers, Scorpion Constructors doing maintenance on passive installations reported numbers of messenger drones that were larger than the original shipment. They also reported that at times Octopi Assemblers that were placed as visual beacons vanished.

Zero G Messenger Drones:
ZeroG Messenger Drones are also boulder shaped, but they posess an equatorial ring with an array of thrusters for normal zero g movement.
Their northpole is the large optical element and their southpole contains either a Vasimir / Ion thruster for long range missions, or a chemical rocket engine for operation in varying gravitic environments.
In the ion thruster configuration their surface is usually coated with solar panels ( or they are stuck on externally ) for extended operation or they receive an RTG as powerplant.