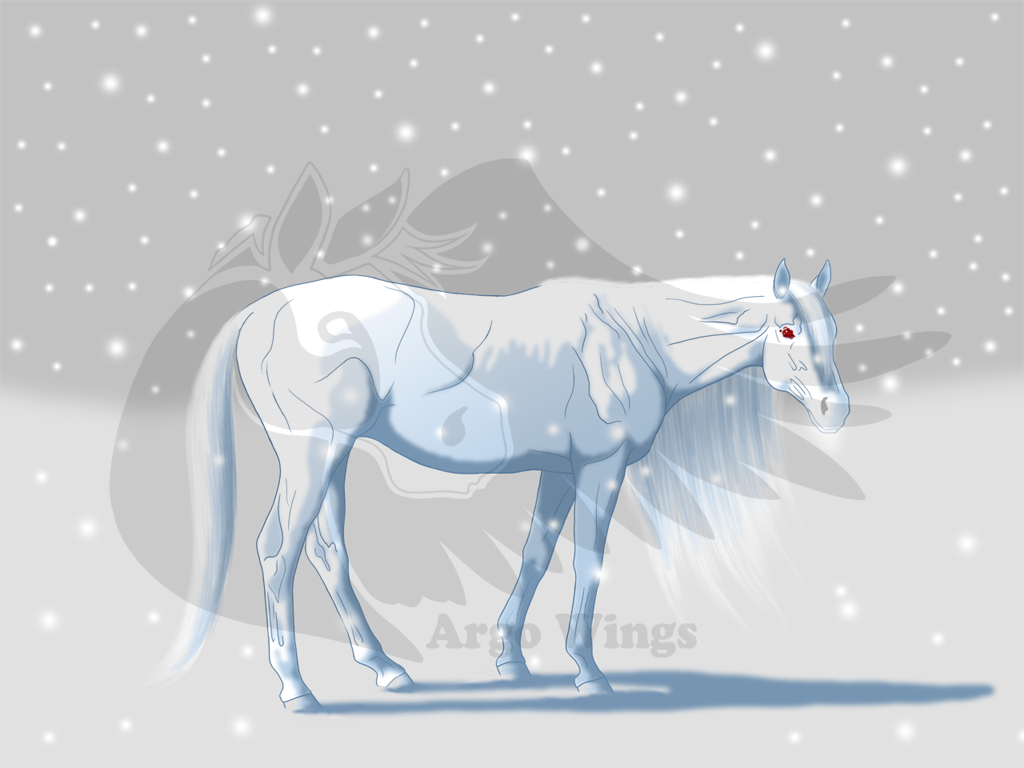 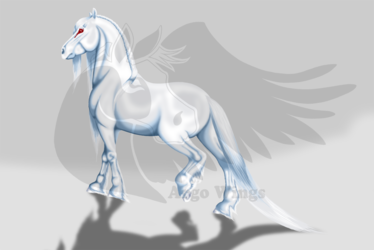 Species Characteristics/Powers: Its hide was generally supposed to be black (though in some stories it was white), and will appear to be a lost pony, but can be identified by its constantly dripping mane. Its skin is like that of a seal, smooth, but is as cold as death when touched. The horse's appearance is strong, powerful, and breathtaking. Water horses are also known to transform into beautiful women in order to lure men into their traps. It is understood that the nostril of the horse is what creates the illusion of grandeur. The water horse also creates illusions to keep itself hidden, keeping only its eye above water to scout the surface, much like the illusion of a fish's pupil. It is wise to keep away from them. If a human climbs on the back of a water horse, the horse will often dive into the water an drown its rider. If a human gains control over the horse the horse can be put to work in fields. Water Horses have the strength of ten land horses and do not like to be enslaved and will try every trick to escape.

The water horse is also a common form of the kelpie, said to lure mortals, especially children, into the water to drown and eat them. It performs this act by encouraging children to ride on its back. Once its victims fall into its trap, the kelpie's skin becomes adhesive and it bears them into the river, dragging them to the bottom of the water and devouring them - except the heart or liver. A common Scottish tale is the story of nine children lured onto a kelpie's back, while a tenth keeps his distance. The kelpie chases him and tries to catch him, but he escapes. A variation on this is that the tenth child simply strokes the kelpie's nose, but when his finger becomes stuck to it he takes a knife from his pocket and cuts his own finger off. He saves himself, but is unable to help his friends as they are pulled underwater with the kelpie. Commonly known as spirits of the dead, kelpies are not benevolent creatures.

Description of Character: Shiva is like any other Kelpie but unlike her kind she is a half breed. Her father was a famous Kelpie and her mother a famous Thoroughbred race horse. Shiva has never known or seen her father, since he left right after raping her mother. The outcome of the rape was Shiva. Her eyes were stained with blood and made her become a albino horse. She has heritaged the speed from her mother but the fierce nature from her father. Her hatred for humans was certain from the day she was born into the first day of light.

Personality: A mare with fire always burning in her heart. You can almost see the fire if you look into her eyes. She loathes humans more than anything. Blame the Kelpie in her. She has killed many humans by either drowning them or eating them. She is a monster that the earth has not seen the likes of... as of yet.

History: Shiva was conceived by rape. Her father, a Kelpie from the Scottish waters came upon land and raped her mother while she was gracing in a field. Months later Shiva was born and no human ever dared to touch the foal, for already then the hatred was shown clearly. She bit the hands of those taking care of her mother, leaving harsh bite markings in the human skin. As she grew up she got worse and worse to handle so they tried to put a bullet to her head but she escaped and disappeared into the waters where her kin came from. She never saw her mother again. Perhaps her mother was relieved of the horrible monster she had been forced to give birth too. Now... Shiva could not live with the Kelpies either because of her heritage. They said her stench of human could be smelled from afar so she was cast out. None caring she went along on her own seeking a place where perhaps the likings of her could find place to call her home. Becoming a wanderer she went far across the world, seeing many things, but never found her place in the world... until she met a stallion so fierce and dark hearted that it could match her own heart. Intruiged she approached the stallion with no fear touching her heart and a strange bond was created between the two evil beings, who had seen nothing but death and evil around them. A strange couple came out of this and now Shiva knew she had found her place. A place to call her own.