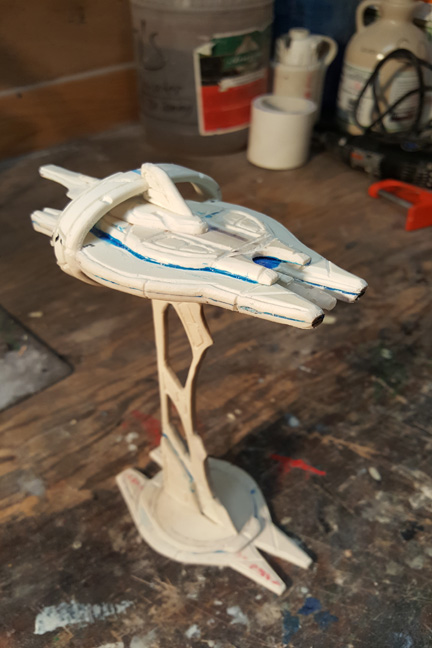 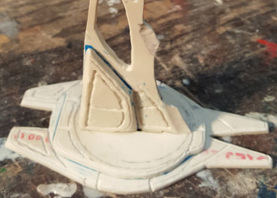 This is a small model of a starship I created by hand from: you guessed it- PVC. It's a completely scratch built design made of flat sheet. I've been wanting to make a spaceship for some time now but was not sure how to go about it given they tend to be quite symmetrical and I rarely have the right found items to build such a thing. Following the succes of my PVC dagger design process I decided to try to create a small craft in a similar manner. To create it I removed a good straight piece from my stock of split, flattened pipe and began drawing outlines. I layered them and filed contours where necessary, etc. The fabrication was accomplished with just a Dremel, a heat gun and a power drill. The craft is just smaller than my hand.

I did not have a plan in mind as to what the craft would look like and I'm pleased with how it turned out for an impromptu build. The whole project took about 12 hours of fabrication, six each for the craft and stand. The only found object in the project is the ship's cannon barrel which was made using a plastic pin I found.

The ship is essentially finished but I may add extra weapons and attempt to make an acrylic cockpit canopy for it. I will probably paint it in spring. It was a rush job so many seams/panels and various details are not symmetrical. Even at that it turned out greater than I could have hoped. Not bad for a first of its kind intended as a Proof of Concept. I hope to make more ships of different styles and sizes in this fashion in the future.

The style turned out to remind me of the ships from the old Shoot Em Up sidescrolling games I loved so much as a kid. I wonder
what evil alien threat it's going to go vanquish?