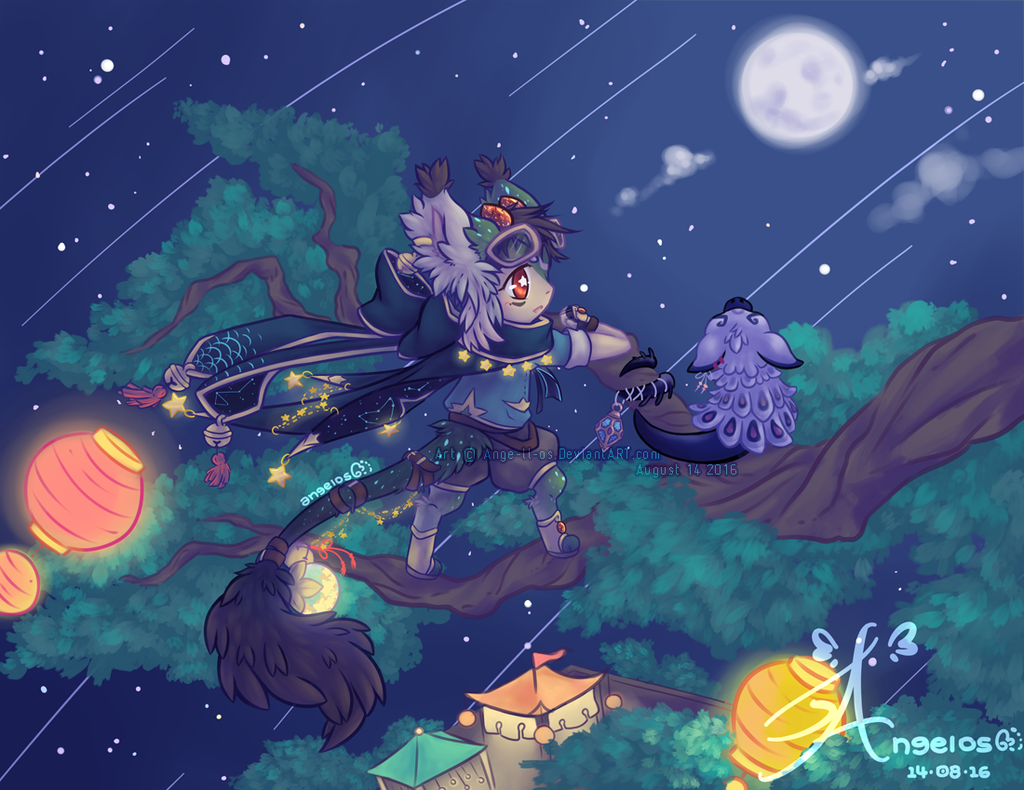 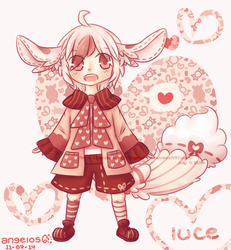 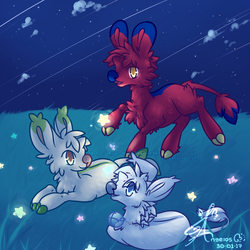 My pic for the My Faire Elnin prompt!

//slides in literally in the last hours
Hi I'm Angie and I am the worst procrastinator especially when it's hot as hell.. At least it was pretty cool the last couple days so I actually got a decent chunk of work done to finish this ovo" More Elnins to come cuz I got a commission which is sketched out that I'll be finishing next!

jaywalk I didn't get a reply back so I hope you don't mind me attacking you with semi giftart since I gave your Lanturn Dragon a little cameo~ Figured it was ok since I've attacked you with giftart before and we're mutuals haha so surprise I guess!

Xiaoxing's not really good with busy/crowded gatherings but he does really love the Starfall Faire if only to watch the falling stars. He's climbed up above the lights and bustle for a better view along with an Elseworlder he met ['swan child' the Lantern Dragon]

I really love how this turned out though I'm not that familiar with doing gijinkas; drew Xiaoxing in his gijinka/anthro/whatever you call it form which was different but pretty fun though the legs and hands were a struggle.. the two things I'm bad at.. together... hands.. and anthro legs OTL I haven't drawn anything big/properly for months so I was like???? wow I still remember how to art??? and it's going really well??????? thanks to whatever higher power was helping me laughs real hard
He's wearing his Starfall Faire outfit which is slightly different from his usual [oops I don't have a pic for comparison] which I had a ton of fun designing~ It's too bad you can't see all of it but I did my best to find a pose to show off as much of it as I could ovo I just.. love giant bow-cape-things...so much.. totally inspired by the adventurer outfits from Fire Emblem Fates which are so so pretty His cape is a fancier cape [and he's got the big bow] and he's hung some glowing gold chain and stars from the belts on his tail~

Nighttime scenes are both so fun and so frustrating at the same time >w>;; It can be a bit of a struggle to pick colours to match the atmosphere and lighting but it looks really nice in the end and I get to use lots of blues/bluer tones so that's fun~ I hope it's not too blue/dark/?? haha my screen doesn't really like dark colours too much so I hope it looks nice on everyone's screen! Folliage is such hell to paint pfft my hand was a bit numb/stuck in a claw after I finally finished with it :') I oddly enjoyed drawing the big branches though?? Apparently twisty branches are fun to me ahahaha

DO NOT REPOST, EDIT, COPY, USE, REDISTRIBUTE, "REFERENCE" or TRACE etc... My art/character is not for free use or part of the public domain! Use in any way, shape, or form without my written permission will result in me reporting it. All rights reserved. Thanks!