Fools of Yorkshire 3 / 17 by Angellothefox 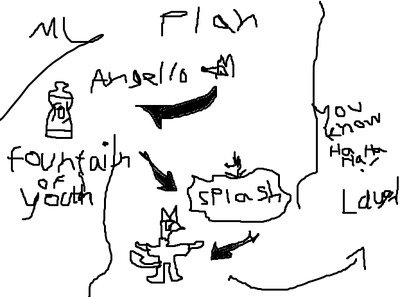 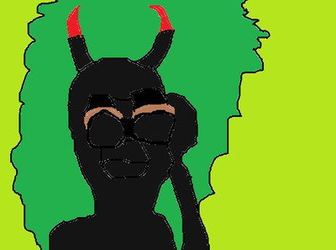 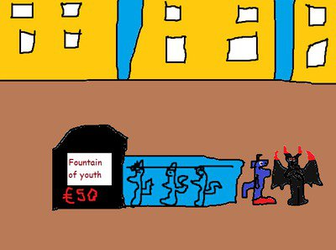 They got back to Crystal Fires house
Crystal Fires Mummy was just leaving. "Try to be good but ether way I don't care"
She said while leaving the house.

Crystal Fire got out a big board at Judas didn't know at he had.
"Wow you have a board now. Hay those doodles are pretty cool did you do those?"
Crystal Fire rolled his eyes
"Yes Judas I did the evil plan. So enough playing around I have a plain to show you.
Basicly we get Angellothefox and a bottle of some Fountain of youth splash it at him. Angellothefox turns into a baby and er...
Oh yeah I laugh at him."

Judas put his hand up and said.
"That is a pretty good plain but you are forgetting one thing. Infact I do not think you thought it out as properly as I expect.
For one You can not just expect Angellothefox to come with!
You can not just kidnap him because that is against the law!
For the Fountain of youth there are only 3 in the United kingdom
they are two in irland but that is not the point!

The first is in London the second is in Wales and the third is in Scotland!
And don't you think your not the only one who wants water at makes animals
younger. other animals do especially the elderly once!"

Crystal Fire paused for a minute...
"Then we must go to London" He said
"Oh gosh listen to yourself LONDON IS EXPENSIVE!"
"That is why we are going by coach Judas"
Judas sighed and rolled his eyes over his head.