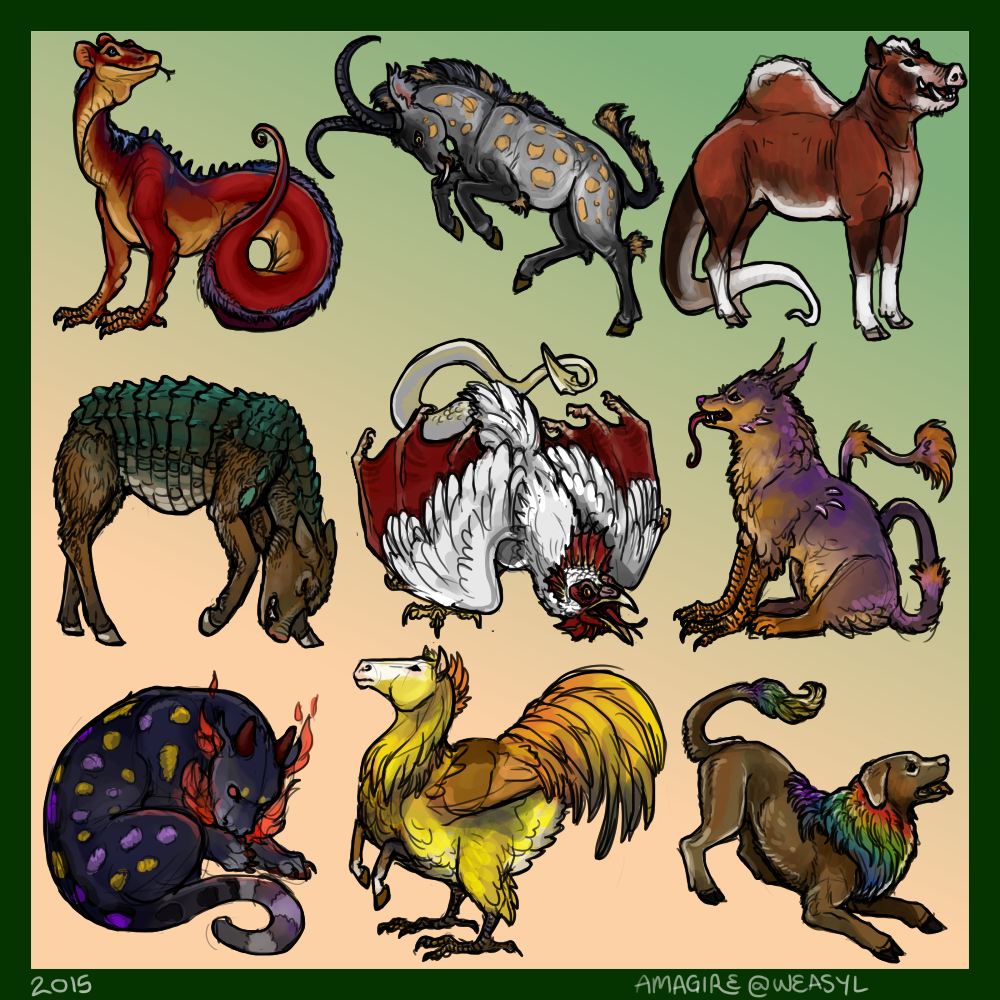 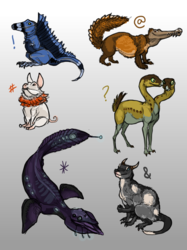 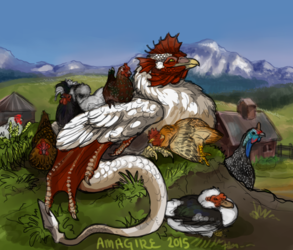 Hello. I know this will surprise some of you, but I am a GIANT NERD. Have some mythical adoptables. I didn't number these, but I've listed them below in a left-to-right, top-to-bottom order that's hopefully intuitive.

EYDIS THE LINDWORM crawled out of a Norse burial mound when she was disturbed by archaeologists in 1939. She works part-time at a florist shop in Oslo, and enjoys visiting the seaside. Likes: deadheading, beef cooked rare, nu-metal. Dislikes: tourists, Vikings. available

OENGUS THE YALE will do pretty much anything if you bet him a pint that he can't. His horns can swivel in any direction, which is an entirely useless special ability that all yales are very proud of, for some reason. Legend has it that he appears to university students the first time they get drunk. This is true, but there's nothing supernatural about it; Oengus just knows who is likeliest to give him beer money. available

TIPTOFT THE YPOTRYLL used to hold up half of a coat of arms in Worcester, but she retired in 1881 and is currently a speech instructor in Cambridge. She is polite to strangers and has very precise diction. Likes: black and white movies, guinea pigs, birdwatching. Dislikes: cryptozoologists, public transit, littering. SOLD

JAN THE CATOBLEPAS keeps his eyes fixed firmly on the ground. He isn't sure whether or not he can turn anyone to stone with his gaze, and isn't prepared to risk it. He has a variety of broad-brimmed hats for any occasion, but sunglasses tend to slide off his snout. Likes: artisan cheese, audiobooks, rolling in mud. Dislikes: anyone who asks him to give their kid a ride so they can take a picture. available

MOWBRAY THE COCKATRICE will fight you and ten like you. He keeps a wide variety of exotic and heritage poultry on his farm in Colorado, and spends most of his free time raising chickens, selling eggs and chicks online, and painting NO TRESPASSING signs. Likes: chickens. Hates: everyone not chickens. SOLD

ALAIS THE ALFIN is a stand-up comedian in Oregon. Her sets are mostly Portland-based humor and she has yet to enjoy much success outside of her local audience, but the money she makes feeds her and her cat and lets her visit friends all over the country when she wants to, so she can't complain. To pay her rent, she's an assistant manager at a local donut shop,and has an outrageous knack for coming up with new donut styles for every holiday. Her signature is crazy icing colors and excessive unseasonal use of decorative candy corn. Likes: candy corn, Hallowe'en, Portland. Dislikes: fleas, people who don't wash their hands in public restrooms, Miami. SOLD

PERONELL THE PANTHER spent most of her life in a cave, only emerging when development in 1980 forced her to relocate. She emits a sweet, intoxicating scent from her ears and mouth, which attracts all beasts to her; this was a terrible problem for her socially until she got a job working at a mall chocolate store. In her free time, she raises cichlids and is a prominent figure in The Adventures of Brisco County Jr. fanfic community. Likes: chocolate, watching figure skating on television, aquaculture. Dislikes: dragons. SOLD

$9 each, Paypal only. You get the full-res transparent PNG (~1000x1000px) and the rights to use the character, change the character, trade the character, roleplay the character, do anything you want with the character EXCEPT resell it for more money than you paid for it. You can also enjoy a permanent 20% discount from me on commissions featuring your adopted character. **NOTE ME to claim. **

Thanks for looking, and feel free to leave any questions in the comments!