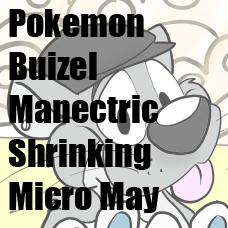 This could be a major problem. Buizilla looked up at the doorknob and shuffled his feet nervously. “What on EARTH was that?” the Buizel anthro cried.

He pulled at the edges of his collar, apparently uncomfortable with the way it had shifted orientation around his neck while his body shrank. Usually Buizilla could be found at a respectable height of 6, maybe 7 feet if he was feeling adventurous. Assuming he wasn’t at his giant size, of course. But that was before a sense of vertigo overcame him inside one of the GroLabs laboratories. He’d only come here for repairs to his collar, then gotten lost along the way. He wasn’t familiar with any of the rooms on this floor. The ottery Pokémon hadn’t realized that this particular lab was meant for shrinking potions, or that some chemicals had stained the floor, or that today was the normal janitor’s day off so it hadn’t been cleaned. It was a series of totally coincidental events that led to him stepping through a green puddle. The sickly-looking serum soaked into his soles. Next time he’d have to learn that shoes were a requirement in all science labs; his beachside attire of boardshorts and not much else wouldn’t fly in the future.

Now he was forced to contemplate his choices for getting out of this predicament. Bui crossed his arms and huffed. He wasn’t going to be happy about it… but there was no good option aside from ‘try to escape GroLabs’. He had a hunch that something was going wrong in the labs, and that meant he was in danger as long as he remained. There wouldn’t be any ladders nearby that could help with getting to the doorknob. Measuring himself against a nearby table, he guessed by now he was about 2 feet tall at most. He’d practically have to jump between the rungs of a ladder to get up higher. And that wouldn’t help at all with the problem of moving a ladder as tall as a mansion compared to him. If not a ladder, maybe he could find some string and make a lasso? That sounded more doable. But all the string was going to be on the lab benches… which looked equally intimidating to climb.

Wait. Why was he even thinking of ways to do this? He’d use the size collar. That was its whole purpose! Thank goodness he’d just gotten it repaired. Chuckling at his silliness, Buizilla reached a hand up and wedged a finger between his neck and collar. It took a little creative wiggling but eventually his finger caught on the familiar button. He grinned and pressed down, awaiting the familiar tingle of electricity against his neck.

His grin faltered as he pressed the button once more. Still, no jolt of electricity. No surge of growth. No sudden perspective shift. Desperately now, he mashed the button as many times as he was able. Buizilla collapsed to the ground, suddenly struck by the full force of how much trouble he was in. There wasn’t even a plume of smoke coming from his collar’s internal electronics. At least that would’ve signified something was going on. Instead, it seemed more like his collar’s growth button simply didn’t work. None of the buttons worked, in fact. His collar was completely dark. So, whoever did those repairs hadn’t fixed it at all. The collar was just non-functional now.

Buizilla sighed. When he got back to normal size, he was going to give that engineer a piece of his mind. Sitting down here wasn’t going to fix the problem though. The Buizel stood and was promptly hit with another wave of vertigo. The cool laboratory tiles under his bare feet slid outward. Bui could at least recognize that feeling from moments ago. It was the same sensation as shrinking the first time. He shook his head to dispel the dizzy sensation, placing a single hand on the door to steady himself. It didn’t help though as he could literally feel his hand sliding down on the wooden door as well, the cool grain of the material naturally scratching lightly against his hand.

Within just those few instants, he’d shrunk by nearly a fourth of his current height. That put the sea weasel Pokémon at a foot and a half. With a gulp, Bui realized if he didn’t get somewhere and find help quickly even that wouldn’t last. The string might be his best bet to hook the doorknob and escape. He scanned the room and realized there was a chair that might be climbable. And if he climbed the chair quickly enough, it was a short jump to the lab tables. Yeah, maybe he could get up there and find some string after all!

The orange-furred ‘mon began his long climb up the chair’s leg. The first part was easy to do: he jumped up grabbed ahold of the plastic surface. This chair had a support rung connecting each leg, about halfway up, which made it the perfect place for a doll-sized Buizel to jump and pull himself up. He panted with the exertion of basically doing a pull up while in the middle of continued shrinking.

Once he’d carefully pulled himself up, he collapsed on that rung for a moment. He needed to catch his breath. There wasn’t any time to spare though. The idea of being stuck small enough to easily use the chair like a thick tree branch, resting atop it like a cat was very motivating to not stay still too long. It took only a few minutes for Buizilla to reach that rung. But half an hour later, he was still attempting to climb up from there to the chair’s seat.

“Why do these chairs have to be so… large…?” he said through gritted teeth, as he pulled himself up on the smooth plastic surface. Sweat covered his body, tiny droplets landing in ever smaller puddles on the chair. Heaving himself up with one final push the ‘mon collapsed yet again. Looking up at the lab bench, it seemed like it was even further away now than when he’d started. Oh no… the shrinking was going faster than he expected. There wouldn’t be any time to catch his breath here. But he was so, so tired already…

The door to the laboratory creaked open. He jerked himself back to his feet, eyes darting to the doorway nervously. No no no, if anyone saw him this size there was no telling what might happen. He’d read and seen too many shrinking stories and pictures to think of anything but the worst possible endings! He was SNACK sized!

A Manectric rolled a mop and bucket into the room, grumbling as he did. Maybe it was the janitor? Hard to tell when the Pokémon out there was comparatively a mile away. But at least he was getting closer. The rolling of the bucket generated subtle vibrations in the floor that, even transferred through a chair, was enough to shake Buizilla as if he’d received a full body massage. Now that the intruder was closer, Bui recognized him. That looked like Trick. He recognized that scowl and the white tank top. What on earth was he doing here?

Wringing out the mop, Trick started wiping away the remnants of the shrinking potion. This was just a part time job for now. He wouldn’t remain a janitor for long; just to do a favor or two, and get a little extra pocket money while the regular guy was away. He hummed lightly as he cleaned, not aware yet of the second person in the room. Sure he heard the squeaking, high pitched yells, but Trick assumed it was just the squeaking of a mop across the tile floor. With a shrug he returned to the task, as the bright green goop slowly leeched away into the bucket.

Trick turned around, eyebrows furrowed as he searched for the source. It occurred to Buizilla that maybe getting the attention of someone at least 10 times his size wasn’t the best idea. Recognition dawned across the Manectric’s face as he locked eyes with his shrunken friend, and Buizilla’s stomach dropped. Oh no. That was really good, but really bad too. He was knocked to his butt as Trick approached, shaking the ground with each quaking stomp.

Trick waved down at the little Buizel, grinning like he’d just been caught with his hand in a cookie jar. “Heeeyyyy little Bui. How’s it going down there?”

“How do you think it’s going?” he cried.

“Fair,” Trick conceded. “Then what are you doing in here? How about that?”

“I’m here since I have a key. Perks of being a consistent test subject. What about you?”

“Well there was some SUPER dangerous shrink serum in this lab, and someone spilled it. So I’m cleaning it up. You’re the one who’s walking through a lab he really shouldn’t be anywhere near, with a bunch of dangerous chemicals on the floor,” he said, bending down to be eye-level with the 3-inch-tall Buizel. Buizilla took a cautious step backward, unused to seeing the Manectric’s face easily as large as a billboard.

Buizilla sighed and crossed his arms. “True, but you didn’t need to surprise me like that. It’s already bad enough without you being here too. Look at me. I’m tiny, I’m still shrinking, and my growth collar isn’t even working.” As if to demonstrate, he put a hand to his collar and tried pressing a button, to no effect. Upon this demonstration, Trick crossed his arms and stared at his shrunken friend. Bui waited and got more nervous with each passing second. He could practically see the thoughts forming in Trick’s head. And none of them boded well for him.

“…I’m taking you with me,” Trick said, as a semi-truck sized hand loomed over Bui.

Buizilla raised his hands, trying to hold back Trick’s approaching hand. He was easily overpowered though, gripped with tree trunk fingers. “What? Wait, Trick. Don’t!”

“It’s Micro May, Bui. You won’t last the entire month on your own at that size. I’ll get you washed up in a sink so you stop shrinking. But don’t worry. There’s only 30 days left in the month. You can grow back at the end of all that.” And without another word, Trick pocketed the still shrinking sea weasel and went back to work. No one else would know of Buizilla’s predicament; he was truly lost for a whole month. 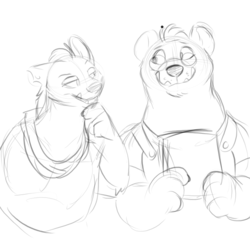 Except on Micro May. Then things get a little weird.

Also a little late for Micro May, whoops. Buizilla TOTALLY deserves to be made small and bullied by large folks all the time. But we can blame KitsuneKit a little bit for this story trade too. :B