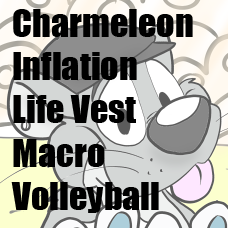 A meerkat sighed and walked along the beach, kicking at hills of sand. The annoyed act didn’t fix his problem, but it did make Alkali feel a little better. How could he have forgotten a beachball on his day off at the beach?! Without beach volleyball, it was barely a beach vacation at all! Al wasn’t going to drive all the way home to pick one up though; it was a 2 hour drive there and back. Beach volleyball was important, but 4 hours of driving wasn’t worth it. So he sighed and patrolled, looking for anything fun to do or a friend to borrow a ball from.

None of the other vacationers had a beachball to spare though. No one, that is, until he saw someone floating out in the lake. He had to squint his eyes to make out the details but… yes, far out in the water a Charmeleon floated against the blue backdrop of the lake. It looked as if he was wearing a lifejacket, bright blue as well. The meerkat’s mind began churning with a devious plan. If he couldn’t find a beachball, maybe he could just make one instead.

There was just one problem: how could he get that lifejacket to puff up and out? The meerkat peered across the beach for anything that might assist. Way out at the end of the beach he saw a hose, hooked up to an air compressor. “Go white water rafting, $50 for a raft!”

Bingo. The meerkat sidled up to the hose, and began to pull it out toward the lake. It was long enough… he could swim it out there…

Grant adjusted his black baseball cap before relaxing on his back in the lake yet again. His hands crossed beneath his head forming a pillow. Water splashed around his tail as it flicked back and forth. The Charmeleon took a deep breath, savoring the fresh breeze as it filled his lungs. What a perfect day to relax on the lake. Some people might have felt more comfortable on a boat, or in a raft, or a canoe. But not Grant. He felt more at home with the water on his skin. A little ironic for a fire type lizard Pokémon to enjoy being in the water this much, but oh well.

He dozed lazily with the light breeze and cold water, hardly paying attention to anything except his own relaxation. He never heard the splashing of a swimming meerkat as Alkali approached from the left. The nozzle for his life jacket was left completely open, with no defenses. It was an easy task to sneak up and hook the hose into Grant’s jacket. The meerkat chuckled underwater as he swam back to shore, bubbles of air floating up from beneath the water’s surface. Soon he’d have a beachball, and an end to his boredom!

Grant spent those remaining few minutes without a care in the world, and a smile on his face. The hissing noise got louder and louder, until the Charmeleon could no longer ignore it. One of his eyes peeked open to look around, and see if the hissing noise could be silenced. The source wasn’t readily apparent so he tried to roll over in the water and paddle away. Maybe it was just out of view, so he should just go somewhere else… as he rolled, the hose tangled up against his feet.

“Huh?” he mumbled, looking back at the hose. Or at least, the portion of the hose that was still visible. The blue rubber of his vest was already starting to obscure his ability to see back toward his paws. Grant’s eyes went wide as he yelped and began flailing. His arms pinwheeled in the water, attempting to make any forward progress away from the hose. Nevermind the fact that it was still plugged into the vest’s nozzle. He needed to escape! That possibility was rapidly becoming a non-option though. The air turning his vest from garment into a ball had started to displace enough water that Grant was pulled out of the water. At least this way he wasn’t feeling cold anymore. But it did remove one more option from his toolkit for stopping this inflation.

He floated aimlessly like that for a moment with nothing but the hissing hose to keep him company. Minutes later, a canoe passed on the river with its occupants giving Grant the strangest look. The Charmeleon blushed furiously and waved back at the canoe.

“Hey, could you uh… give this hose a tug? It’s sort of interrupting my relaxation,” Grant asked with as modest a tone he could manage. The two otters paddling the canoe looked at each other before shrugging, directing their boat toward the Pokemon balloon. They were friendly enough, just a boyfriend and girlfriend out on a romantic swim together. But they didn’t seem to have enough strength to pull the hose free.

Grant sighed, “Oh well. Could I get a lift back to shore then?”

Even as he was dragged closer to shore, the Pokemon felt the pressure get tighter and tighter all across his body. His arms pushed out from his sides by the expansion of his vest. He’d quickly gone from ‘slightly overinflated’ to ‘practically a blimp’. Now the tension of his suit was forcing his arms and legs straight, stiff, unable to move except for a few wiggles and squirms. The surface of the blue lifejacket had taken a bright blue shine, stretched nearly to its absolute limit with air. Grant was nothing less than a sphere by this point and if he kept this up he’d only get larger and larger… he’d practically reached the size of a small house.

Minutes passed as the team of otters struggled to paddle their enormous cargo back to the shore. Maneuvering a canoe is difficult enough without also dragging a 10-foot-wide balloon with a Charmeleon inside. They crashed into the shore, desperately jumping out of the canoe to get away as Grant’s inertia kept him floating forward. He rolled over the top of the canoe and onto the edge of the beach, settling slowly into the warm sand. The hissing sound quickly came to a halt; the sudden jerk of rolling forward pulled the hose loose from Grant’s vest. His vest held its pressure for now though, wobbling and creaking dangerously on the beach.

Grant huffed, his disappointment palpable. This was not the day off he’d imagined he would get. But just what could he do? By now he’d been bloated large enough that there was no way he could get free without help. He called out for someone to free him, but the lifeguard was too far away and clearly not paying attention. The Charmeleon decided his only course of action was to wait, and work on his suntan in the meantime.

The ground rumbled beneath Grant. Even with all the padded, inflated wetsuit that covered his body, he could feel the vibrations of something massive approaching from behind. Then, the sun was blotted out by something very large, covering the Charmeleon in darkness. He felt two hands, massive things with fingers the size of tree trunks, pick him up and raise him dozens of feet into the air as if it were nothing. The air shuddered as he felt someone enormous chuckle, displacing air as if he were caught in a storm.

“There we go. The perfect sized beachball for volleyball,” Alkali chuckled. The meerkat, over a hundred feet tall, stomped across the beach to a makeshift volleyball net made from a fishing ship’s net. Several other giants were there, limbering up with stretches for their volleyball game. It takes lots of effort to get a ball large enough for macros to play, so when these giants heard someone had a ball they were more than willing to join a pickup game. Grant watched them all wave and smile at him as he approached in the meerkat’s grip. He gulped nervously; he'd never been a volleyball before… hopefully they were gentle! 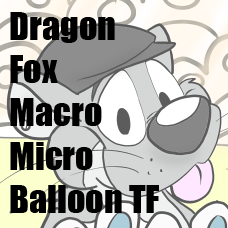 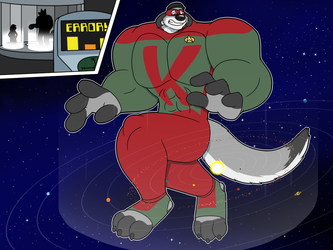 Alkali -really- wants to play volleyball. Enough that Grant should really be worried about that hose coming toward his life vest...