When Redd Met Al [1 Hr Commission for ChibiBuizel] by AlkaliRoo 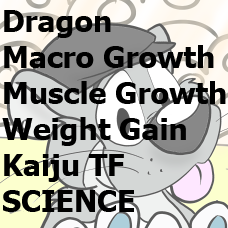 The door slammed open to Alkali’s lab. The kangaroo scientist started, whipping around to see who was walking in. Usually his friends didn’t burst into his private lab space without asking. At least, not without also being forced to do so thanks to growing. So to find someone walking in unannounced, especially a stranger, was quite the shock.

The dragon that entered wore a black tank top and shorts, waltzing in as if he owned the lab. He looked a bit like another dragon Al knew, Chibi. But this one seemed much more confident in himself, and his skin was red rather than blue. The protective scales on his arms, feet, and tail were a nice addition too.

“Heya! The name is Redd. Chibi mentioned that you like to make people big,” the dragon said as he approached. “Well I want to be big. Really big. Don’t worry about cost or anything, I just want to be as big as possible. Think you can do that?”

Alkali blinked, still trying to process what was happening. “Uhm. Yes? You don’t have to pay, I’m just… Chibi sent you?” he asked.

The dragon shook his head yes and reiterated, “As big as possible.”

This was interesting… very interesting… Al looked the athletic dragon up and down before a smile worked its way onto his lips. He didn’t know where Redd came from or how he’d met Chibi, but he wouldn’t turn down a brand new test subject that was this willing. “Well if Chibi sent you, and you really want to get ‘as big as possible,’ I guess I have no choice but to listen. Any friend of Chibi is a friend of mine.”

There was no need for pretense after that; Alkali produced a ray gun labeled ‘Kaiju Ray’ on the side and took aim. “Hold still, I haven’t beta tested this one yet so I don’t know if the aim is off yet,” Alkali warned. What the kangaroo didn’t say was that he also didn’t know how strong it might be. After all, Redd did say as big as possible.

Rather than the usual reaction of running or flinching, Redd opened his arms wide and welcomed the ray as it struck his chest. That should’ve been a major red flag to the kangaroo, but he was far more interested in taking notes on the upcoming changes. When the bright red energy dissipated into the dragon’s body he watched with rapt attention. The kaiju ray was designed to accentuate the natural attributes of whatever species was hit with it… he had no clue what might happen to a dragon, particularly not a dragon he’d never met before.

With a burst of size on his chest the dragon stretched his tank top to its limits. Redd huffed when his top heavy body stopped its expansion, rubbing a hand across his pecs. The tank top didn’t rip; it merely stretched to accommodate the excess dragon beef inside. Another red flag that Alkali probably should’ve noticed. Instead he took copious notes on the thickness of the dragon’s biceps, or how wide his thighs had become, and how the shorts were skin tight on them.

The next change came with a significant burst forward again, but this time it was localized heavier toward the dragon’s bottom half. The button popped off Redd’s shorts to make room for the boulder-like gut that flopped forward against his knees. Redd huffed, tongue rolling out of his mouth as he panted. Clearly whatever was happening felt very, very good for the dragon. Both hands lifted the mass of his gut to carry it over to a table. He let it go all at once and grinned when the table cracked in half.

“That’s the stuff. Definitely need some more of that,” he said to Alkali with a grin.

As if responding to the request, Redd’s body shivered and doubled in height in the span of just a few seconds. Redd moaned as he adjusted his stance, with hips bumping into tables that just a moment ago were giving him plenty of space. The flip flops he’d worn inside snapped off his toes and were smothered under feet as wide as a coffee table. Redd set his hands on the sides of his gut and squished his fingers in. He grinned when he felt himself squish lightly, fingers gripping the muffintop. He was positively fat now… good.

Alkali’s eyebrows rose; something was prickling at the back of his neck, as if instincts were trying to warn him that something bad was going to happen. He ignored the sensation. He could handle any greedy, 10 foot tall dragon that came along asking for more. And he already had, dozens of times before when just as many experiments went wrong. This time would be no different.

“Ahhh,” Redd sighed. “Wow, is that my voice? It sounds so much deeper now… I like it. Gimme more, Al.” He struck a pose, a double bicep flex.

The kangaroo was taken aback. “More? Uhh, the ray was only charged for one shot. It’s still in development.”

The dragon frowned. He was about to protest when he felt his body tingle again. “That’s alright. I’m not done yet, and I’m gonna take as much size from this as I can,” he chuckled. And he started to grow again, this time with less control. His arms thickened to the size of tree trunks so that he struggled with the bicep pose; his muscles were actively getting in the way of flexing. The rest of his body caught up soon after: shoulders, chest, and back bloated with sinew and power until his muzzle was pushed upward by the pecs.

“More…” he grumbled, widening his stance again when he gained weight. The shorts below ripped free but that didn’t matter now. His gut wobbled with each extra ton added, while his rump behind softened and pushed up against a machine that moments ago towered over Redd at 8 feet tall. “MORE…” he repeated, when he felt the gurgling of his gut. He swayed his hips and pushed over the complicated scientific equipment with no more effort than pushing a chair. It tumbled to the ground and shattered.

“GIVE ME MORE,” Redd said, as if recognizing that the kaiju blood in his ancestry was being reawakened and listening to his desires. The ceiling came closer and closer, 20 feet in the air. Finally his horns clacked against the metal and the growth slowed to a halt. Redd had gone from slightly athletic to a kaiju-sized monster, with a musclegut to match his new stature. The kaiju rumbled his appreciation. He gave a toothy smile, and Al saw that his fangs had grown much sharper. Combined with talon-like claws on each hand and foot, and the extra tail spikes behind, Redd was the spitting image of a city-stomping monster. He placed a hand on his other arm’s bicep and flexed just to feel his fingers struggle to keep a grip. And slowly he traced down to his gut… he smirked internally; the bottom-heavy body type suited him. He tried to reach his arms forward to hug his gut. But he could only manage half the distance now. Redd purred his approval, sounding less like a cat and more like the rumbling of a car engine or growling of Godzilla.

“Chibi was right. You’re good at this. I’ll be coming back often, shortie,” the monster-sized dragon said as he tried to leave the building. His voice was much deeper now, a booming bass that could be heard even outside of the warehouse-sized lab. Redd’s horns scraped across the ceiling and knocked plaster loose, but he made no apologies and didn’t try to hold himself back. The floor crunched with each step. Alkali was tossed to the ground as he lost balance.

Redd took one look at the doorway outside and realized it wasn’t even worth trying. His leg alone wouldn’t fit through that, much less the rest of him. So with a smug grin he made an exit of his own. 20 feet of dragon walked forward, through steel and concrete, bursting out the opposite side of the wall no worse for wear. His tail swayed across the ground, back and forth with each step forward. It dragged on the ground and made a mess of all the lab equipment left behind.

Al watched Redd leave, speechless. It wasn’t until he heard the sound of faraway sirens and car alarms that the scientist shook himself back to focus. He saw the giant dragon stomping down the road, each step leaving craters several feet deep in the pavement. His tail, almost dinosaur-like in size, slammed into houses on either side of the street. And further ahead the roo saw the object of Redd’s desire: an all you can eat buffet. The dragon was pretty far away now but… Al thought he could see a silhouette pick up the restaurant whole and start dumping it to its mouth.

“Wow… If only all of my test subjects were that eager,” the roo whispered. “…hope he comes back soon.” 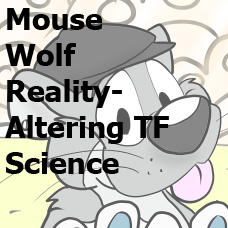 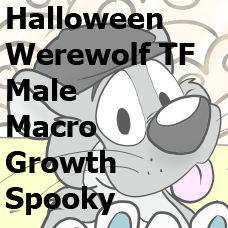 Alright, I know I write for Chibi a lot as it is, but this time he's commissioning me for it! For his new dragon character Redd, and the first time he met Alkali. What could go wrong.