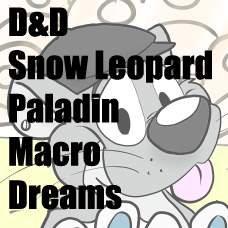 The difficulties of being a snow leopard piled up more and more as time went on. He’d only been in this world for a few weeks, transported here by the spell of some dark entity. It was a world of magic, and monsters. It seemed uncannily similar to the old Dungeons and Dragons games he played with friends. Only real, and with real danger.

That would’ve been difficult enough. His transformation from human to an 8-foot-tall, bipedal snow leopard only made it harder. Wyatt discovered new problems daily now. Grooming himself took forever. He was used to long showers back home, but now there wasn’t enough shampoo in the world to keep his fur clean. Licking himself clean was an odd-but-necessary change for daily grooming. An excessively long tail felt like a blessing at first but after the third time he’d closed a door on it Wyatt’s opinion had soured. He pulled his tail through doors now rather than risk the pain. And that was when he could actually fit through doors; the world wasn’t built for anyone his size. The magic that turned him to a cat had also blessed him with considerable strength. Wide shoulders that often couldn’t fit through doorways… it was great at first, but irritating by now. If he came across any stores run by halflings or dwarves, he more often than not just gave up getting inside. The roofs were usually too low, or the doors pathetically undersized.

His thoughts turned to these daily irritations after lying in bed at a local castle of sorts. Bahamut’s Talon, a sacred order of warrior’s that fought in the god Bahamut’s name, offered him a room here in exchange for his services. A quest of sorts, to take care of monsters that plagued The Crossroads. Nothing too out of the ordinary, and just the sort of job the paladin was honor bound to accept. To do that though he needed a good night’s sleep. But the bed was far too small. His legs hung off the end while his paws brushed the stone floor. Even in place like this, with all the amenities he could ask for, things were too small. Wyatt grumbled his disapproval, tail flicking back and forth.

The snow leopard slept, mind stuck on all the small annoyances of the past weeks. In his heart of hearts he wished for a world where things were more appropriately sized for him. He was happy with the new body in many ways, but above all that seemed to fluster him. In his dreams that night, Bahamut visited him. The visage of the platinum dragon god, looming and terrible, smiled at Wyatt. He’d heard the snow leopard’s grumbling and knew it was time for the boon bestowed on his devotee to take hold. Unbeknownst to Wyatt, Bahamut had plans for the snow leopard. Much larger plans. If he thought life was hard now, it would only be more difficult soon.

Wyatt’s sleep was filled with tossing and turning. A heat rose in his chest, filling his body out to the tips of his fingers and toes. That made restful sleep impossible but the cat didn’t wake up. He was lost in his dreams, wandering a wide plane of platinum scales as far as he could see. A single finger, larger than any planet, reached down and tapped Wyatt on the head. He didn’t find this strange though; he knew enough to realize this was the body of his god, somehow. He did find what happened next strange though. With a sudden rush, he felt the world dwindle around him, watched as the scales that seemed so massive a second ago shrank away. His feet slid over the cool surface of that plane of platinum scales so naturally, he barely noticed when the surface he was standing on changed to grass and forests.

He was tall now. So tall it made him dizzy to even think about. Down at his feet was the tiny castle he slept in. It couldn’t even reach past his claws. It was so small he had to bend down and squint to make out the details. A tiny grey speck of stone, once so imposing, now nothing compared to his height. The snow leopard wiggled his toes and felt the earth move beneath them, shifting in subtle ways that betrayed the power he now wielded.

In this hazy, dreamlike state he realized it felt good. Really good. Without the inhibitions of his waking mind he could admit to himself that this was exactly what he wanted. Wyatt smiled and stood back to his full height, clouds parting around his waist. A small airship flew past his knees, dodging to avoid the pillars of his legs. He still wore his heavy, studded leather armor but it felt different now. Lighter. Like he had all the power in the world and the armor was nothing more than cloth. Wyatt took an experimental step forward, grinning as the ground compacted deep under his foot. He purred contentedly and took another step, this time more forceful to feel the bedrock deep below crack and shudder. His tail swayed across the landscape, dragging the castle with it. The stone structure was lost in his thick fur, trapped by columns of fur follicles that it was likely to never escape from. Forests, lakes, tiny slivers of road, everything was either stomped under Wyatt’s paws or swept up by the long tail trailing behind. He walked with purpose, enjoying the sensation of causing quakes by just walking. For long minutes he continued his trek, stepping over this world that was far too tiny for him.

“Is this the sort of power you desire?” a voice boomed, surrounding Wyatt on all sides. He somehow knew just who that belonged to.

The voice chuckled. “Then I bestow it upon you, my disciple. Take it. You shall be my protector for this realm, growing to meet any challenge that you face. And someday you too shall join me as a god in your own right. If you stay true to the path.”

A fire ignited behind Wyatt’s eyes, turning his vision a deep green. That energy, divine fire from his patron god, filled the paladin from the tips of his toes all the way up to his ears. He knew exactly what to do. The snow leopard turned that energy outward as he walked and when he did, his body expanded to make more room for his power. In a dreamy haze, Wyatt grinned and allowed himself the indulgence of enjoying his deep desires. Every crater left by his paws was further away from the last, and larger by miles. His stride extended over the landscape. It didn’t seem odd to him that no matter how far he walked or grew, he never saw the curvature of this place, nor did he ever double back on his own tracks. It looked to be infinite in all directions.

The ground shook with the weight of his steps, then with the weight of his heartbeat alone. Unfathomable miles of snow leopard paws walked forward, changing the weather patterns and scattering clouds wherever he went. Wyatt felt content for the first time since he’d come to this new world. It felt so natural to do this, to tower over everything and get larger still-

Wyatt startled awake when he felt cold stone press into his foot. The sudden jerk of his head upward bonked it into the ceiling. He almost knocked himself out again from the force of it. With a yelp the feline drew a hand up to his head to rub at the tender spot. When the stars left his vision, Wyatt got a clearer understanding of what was going on.

His feet were pressed up against the far wall of his room, bunched up slightly with his kneecaps in the ceiling. That was what woke him up obviously. He looked to the ceiling and found it dangerously close to his face, maybe just a few feet clearance between his muzzle and the stone. He was surprised to find the splintered bedframe under him hadn’t been enough to stir him from dreaming earlier; at least he was awake now. He tried to squirm in the room, sized more like a tiny box to him rather than a proper bedroom, in order to find a more comfortable position. It wasn’t easy though. His tail snaked its way across the floor and filled the doorway. The heavy wooden door was knocked clean off its hinges.

“Cyril! Corbin! Anyone?” the snow leopard half yelled, half complained. If he could just turn around in his room well enough to get his face toward the door, maybe he could yell in the hallway for someone’s attention. Each squirm shook the castle’s stone walls. That might get someone’s attention more than anything else. He felt a chest of drawers break under his tonnage, and his arms pushed aside a wooden end table. After endless minutes of awkward wriggling, the cat finally got his face in front of the door to peek out.

Waiting in the hallway was a single corgi, about 2 feet tall, tapping his foot on the ground and wagging his tail. “It happened again, huh?”

“Cyril, of course. Who else would come to bail out your big spotted rump?” the corgi said, sticking his tongue out. “…are you blushing?”

“You too. I can still see it under your fur you know.”

The corgi’s nub tail wagged a little harder. He pulled at his shirt, too large to fit the tiny canine but it was the best their group could do for someone that short. It wasn’t obvious to just anyone, but Wyatt knew his little friend had more than a passing interest in his transformed body. Especially when things like this happened.

“Are Corbin or Cedric awake?” Wyatt asked with practiced nonchalance.

“Nope. Just the two of us. You sure tried to wake up the whole castle with that thumping around though-” Cyril started. He was cut off though when an enormous hand shot forward through the door and clenched around him. Wyatt grinned nice and wide, his tail flicking back and forth heavily against the walls of his bedroom.

“Good. Just the two of us to enjoy this then. We’ll fix it later,” he said firmly, before he pulled the blushing corgi into his bedroom. 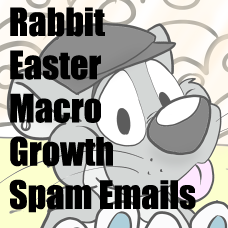 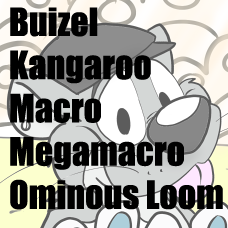 Getting used to becoming a snow leopard is hard. It gets even harder when you sometimes grow in your sleep. Whoops.

This one is just a self indulgent one written for myself. Wyatt is a character I play in a game of Pathfinder, and he's a very good snow leopard. <3