A Question of Sin and Grace by a little alien thing

A Question of Sin and Grace

Sunbeams twinkled through the small windows on either side of the armored door as it quietly slid shut behind the ebon-furred feline. The flat thud of engaging magnetic locks briefly shook the small anteroom as the priest walked the few meters to the front desk.

"Good morning, Father," the doorwarden said, looking up from his morning coffee and paperwork. "Here for your usual? We've picked up another strekmuk. Other than that, there isn't too much worthy of your attention, petty crimes and such."

The priest nodded, the cowl of his dun-colored robe of office shifting with the movement. "I'll want some time with the strekmuk." It was an ugly word, its sound in jarring contrast to the mellifluous words framing it. Civilized peoples rarely spoke it, and never without a wince.

"Cell D-21, Father." The doorwarden tapped a switch on his desk panel, and the cellblock gate rolled open with a clash of gears. The symbolic noise had been ubiquitous in prisons for hundreds of years, even despite the replacement of metal bars with forcefields; it reminded the prisoners of their desperate situation with every entry and exit.

The priest walked along the dimly lit cellblock, for the most part ignoring the prisoners who stared out through the azure force-glow at him as he passed on his methodical way. Another misled one, he thought, even in the silence of his own mind replacing the ugly word with a common euphemism. And barely ten standard years since this planet was colonized. What drives them to such perversion? Surely they must know that what they're doing is wrong; every child knows that. Why, then?

The priest's first impression of the prisoner in cell D-21 was one of sheer size, massiveness. The prisoner - those accused of such a crime as this one lost the dignity of a name - was well over two meters in height, and well-muscled to match, clear definition showing even through the sleek white fur. He looked as if he could break the comparatively short and slender priest in half, if not for the presence of a small disruptor pistol secreted in the robe's broad sash. The prisoner sat on the cold concrete floor of his cramped, narrow cell, his back against the wall and his long legs crossed beneath him, paws on knees. He did not look up until the priest's carefully manicured clawtip pressed the switch to deactivate the forcefield.

"Greetings, child," the priest said, bending his head to enter the cell. He stood at its entrance, regarding the seated occupant with pity. The occupant, for his part, looked back at the wall opposite himself, resumed his contemplation of nothing. The silence stretched out in the cell.

Finally, after a few moments, the prisoner spoke. "Am I your child, Father?" His voice was soft, melodic, with a trace of an accent from somewhere in the Outreaches, the priest thought.

"You have fallen prey to perversity, my son," the priest replied. "Do you wish to come out of your darkness into light?"

The prisoner sat silent, staring at the wall. One snowy-furred paw reached absently up to brush at his cheek, his whiskers flicking. Again the silence stretched out between them, again the prisoner broke it. "If I am, as you say, a mere victim, then why am I confined in this malodorous cell?"

"The government of our illustrious empire is not as civilized as it would seem," the priest answered, sounding sincere enough about it. "Its authority would see you hung in the public square, while the mercy of the church I serve would find you healed, turned away from the vice which led you into this cell."

"Would find me brainwashed, rather," the prisoner said after a moment, his voice soft as ever. "Would find me beaten and tortured into submission, then filled with the lies of the church you serve, the church whose mercy is a lie."

"Whose mercy can find you saved," the priest persisted, kneeling to meet the prisoner's eyes. "Can bring you back from the perilous depth of sin in which you have buried yourself. Healed. Don't you want that?"

The prisoner looked at the wall for a long moment more, then met the priest's gaze. His eyes, the priest thought, his blue eyes, they seem to look through me... "I am a strekmuk," the prisoner said, drawing out the ugly word, letting it hang in the air like a foul odor. "Do you know what that means?" He ignored the priest's attempt at a reply. "It means that I am evil, hideous, a creature fit only for slaughter. Even the word for what I am is ugly."

The priest was taken aback. "You truly believe this?" he managed.

"You do," the prisoner said softly.

"No! No, I don't," the priest replied, his voice rising slightly. "I believe that you have been misled by sin, and can be saved."

"You believe that I deserve only a death unfit for vermin," the prisoner repeated, implacable as he looked at the green eyes in the priest's black-furred face, barely visible in the shadow of the cowl. "I can see it in your eyes. You speak words of mercy and of healing, but they are lies."

The priest dropped his eyes. "Believe what you will," he said, but the words lacked strength. "Lie as you will."

"It is you who lies," the prisoner said. "But not to me. You lie to yourself."

For a long minute, the priest did not speak. "You would have me join you in your perversity, would you, strekmuk?" he said, deliberately using the ugly word.

The prisoner looked back at the opposing wall, saying nothing. He seemed to have forgotten the priest's existence. Nothing moved in the cell.

There was a rustling of cloth as the priest drew the cowl back from his face.

"You could escape the fate that lies ahead of you," he said, almost whispering. "You surely have no wish to die, and yet death would be preferable to a decade in a cleansing camp. I could spare you either fate."

"You were right about me," the priest went on. "Despite all my efforts to escape it, I lie in the same pit of sin as do you." The robe's wide sash was open now, the robe itself parted enough to hint at what lay within. The priest moved closer to the prisoner, laying a jet-furred paw lightly on the larger feline's ice-white knee. "Help me, and I can help you..."

The prisoner sat calmly, only a quick sidelong glance betraying interest in the priest's proposal.

Cloth rustled as the priest shifted closer yet, his robe falling open to bare his well-kept, slender body.

The prisoner tilted his head back against the wall, closing his eyes. In the silence, a paw moved, reaching to the priest, snowy fingertip brushing gently against ebon chestfur.

— And in a flash of motion too quick for even cat eyes to follow, the prisoner sat as far back from the priest as the cell's depth would allow, the priest's disruptor pistol looking absurdly tiny in the massive white paw.

The priest opened his eyes, looking at the prisoner who held his pistol. He did not move, frozen in fear, knowing well how deadly the weapon was. His eyes met the prisoner's, and he knew the terror was obvious in his eyes. A pool, darker than his fur, spread in his lap, the stench of frightened urine filling the close confines of the cell.

The prisoner shrugged and tossed the pistol to the floor where the priest knelt.

For a long moment, the priest did not move, his mind unable to assimilate the previous seconds. Then he hastily snatched up the pistol, as if afraid the prisoner would change his mind and take it back, and held onto it as he retied his sash, hiding the stained fur of his terror. His knees were shaky as he stood, but he managed to keep his feet. "I could have helped you," he said, the regret in his voice sounding genuine.

As the priest turned to leave, a thought struck him. He turned back and studied the prisoner for a moment. "Why did you not kill me?"

The prisoner held his peace, and the priest turned again to leave. The soft, melodious voice stopped him. "We all fear, Father. Some of us surrender to it." There was, for the first time, unmistakable emotion in that voice: pity.

A day later, two guards came with a different priest to the prisoner's cell. They brought a black hood with them, but the prisoner never wore it.

A week after that, the news services carried a short article on the apparent suicide of one Father Nenarthak. The obituary spoke of his ministry to those who were misled by sin, and expressed shock and sadness at his sudden death. The news services did not speak of the black hood worn by the good Father when his body was found. 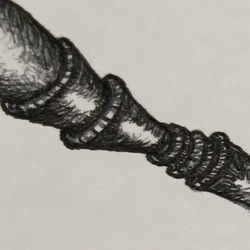 A Question of Sin and Grace

I wrote this almost twenty years ago. It found inspiration in a story entitled 'The Confessor', which I found on Keepiru's site got fox?, now of beloved memory. That story may be found here, and is decidedly NSFW. This story is not.

Given its age - and my age, when I wrote it - I found this story to hold up surprisingly well! Enough so that I'm not embarrassed to share it here, at any rate. Certainly its theme is one with which I find myself still happy to treat today. I hope you find it worth your while!