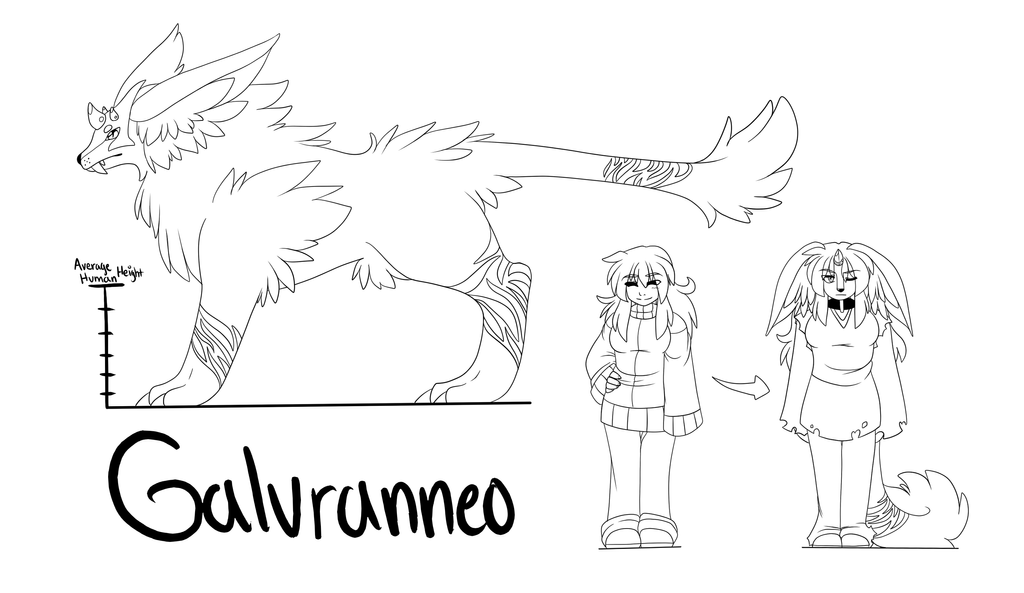 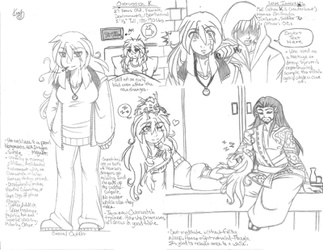 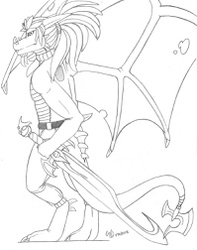 I just finished the Voltron: Legendary Defender series for the moment, and it inspired me to try and make a new alien race for the show/fan-made race instead of going with a Half-Galra or etc xD; (Nothing against them D: ) But the race I made is related to them in some way, since they're one of my favorite races in space besides Alteans, and other races from different shows too. Admittedly this is also going towards a pairing of my persona OC with Lotor as well, but its hard to choose between him and Pidge to be honest TT.TT They're my top two faves in the whole show...Anyway, I had a lot of fun with this, so I'll put more of the Galvranneo information below, besides the persona OC info stuff for this series. Sorry for long-ass page of info here, but I have a lot of fun coming up with shit whenever I make a new species of anything xD;;

Age: 18 when the series starts, 20 or older when 4th season ends

Occupation: Student at the Garrison, Traveling Companion to the Paladins, later Gladiator Fighter and new addition to Prince Lotor's group. Is only somewhat better trained to be as competent as his Generals, before shit starts hitting the fan in later season 4.

Likes: Coffee, Meats and Vegetables, the colors Blue, Green, and Purple, and of course the large sentient lions of Voltron since they're huge mechanical cats. (She's friends with the Paladins and values their friendship dearly, but feels left out considering she's still trying to find out what she's good at when getting to, and after reaching Altea. Piloting human ships is one thing, but trying to help pilot a giant ship or back-seat pilot a lion, its not easy with all the new controls and alien languages.) Anime, Video/Computer/Board/Table-Top/Card Games, Reading Fantasy/Romance/Adventure/Action/Comedy Novels (AKA Harry Potter Series, Lord of the Rings, Blood and Chocolate, Dragon Weather, etc.) Being able to get close to wild animals and creatures if able to.

Hates: The Galra at first, but eventually like everyone else learns they're not all bad. Though this doesnt keep her from hating Lotor a lot at first since he's a manipulative dickbag. She doesnt like how he tells people what they want to hear to get them convinced to follow him, or that he isn't the bad guy, or just to get his way. She knows he's much different, better, and kinder than his father in some aspects, but...It takes a while to warm up to him, more so after he treats her more as an equal, than a prized pet from the Gladiator Ring. Hates anything Cherry EXCEPT Black Cherries, and loathes Brussels Sprouts with a passion. They're disgusting. Caramel when there's too much because its too sweet and makes her gag, same as Mochi Ice Cream because of the rice texture/outer rice layer.

Family: Parents, Father is Dead, Mother is still Alive. Father was Galvranneo, Mother is human and still living on Earth.

Lover: Canon choices are mainly Lotor, and Pidge (Though in the version with Pidge, Kiri is actually male.) OCs are just as accepted.

Children: Maybe, depends on the choice of Lover

Story: Similar to Pidge, Kieth, Shiro, Lance, and Hunk, Kiri was also a student at the Garrison for an attempt at a better chance for education and a future. She's not too close with the group during the time she knew them there, but when it came down to finding out that they found Shiro, what was happening to him, and the strange energy signals leading to the Blue Lion on Earth, well...She couldn't say no to wanting to help, and joined them. Having enough time to go with them to Altea, meet the Princess Allura, as well as her Advisor, the mice and etc. It wasn't until after the end of season one, or the beginning of two where she's separated from them by the Galra, is captured, and is kept as a fighter for their Gladiator Ring. This eventually leads her to meeting Prince Lotor in the ring, and it goes from there, as explained below with more details. She doesnt fight Lotor until after he fights that larger opponent and gives his speech to the crowd, so its later after that if he wanted to participate again. (I'm still working on more specifics, but I wanted to put something together for now.)

Galvranneo is originally a more animal, feline-predatory sub-species cousin to the Galra. Females are different with shorter ears, and smaller jeweled horns. They originated on the Galra Home-World, but due to hunting for sport and rites of passage almost to extinction, the species was forced to learn and evolve. Gaining sentience overtime and changing forms into more humanoid like bodies to better blend in and keep their species alive. Thankfully, most of them had learned how to leave the planet before its destruction due to the incidents with Zarkon, Voltron, and the Quintessential Rift. Some were even able to make it far enough to the Milky Way system, living on the planets of that solar system, and even a few on earth. If any purebreds are still alive to this day, they have the ability to change back into an animal form whenever the need arises, but it takes some time and concentration to change back into smaller forms.

Galvranneo were valued for the sport of the hunt, as they were smarter creatures and gave the Galra more of a challenge. The three horns on their heads are jewels with extremely high value, and their fur is very durable similar to steel. The teeth and claws are just as valuable, so almost all parts of the creatures are well-paid for in Black Markets, and for Taxidermy. On the Galra Home-World, they were stuffed, had their heads put onto mounts on walls, or were even fashioned for clothing and armor. (Galra that managed the feats of killing them wore their furs and fangs and horns as trophies.) The noble classes also loved fashioning the beasts into fur rugs. Concerning more biological bits of information, the Galra and Galvranneo still have quite a bit in common. There's heat cycles/seasons, that very depending on the kind of Galvranneo since there are different types depending on where they live, rather which environment. Males and Females fight for mates, or fight the one that they choose as a mate for the challenge and asserting their levels strength. There's also imprinting, which is caused simply being around one their body and mind subconsciously chooses for them. In this case, it can also be during fighting, or from catching their scent by blood or other means during or outside of heat.

Though imprinting doesnt happen all the time, its a recorded case. Also similar to the Galra, the Galvranneo also scent, or mark their mates so they're not taken by others. The biggest commonality is that both Galra and Galvranneo love to fight and challenge others, over food, mates, and territory. Though now as the species has evolved to take more humanoid like forms, there can be changes, or at least no as strong as behavior with all of these factors. The young can be born in different ways depending on the other parent, if they crossbreed with another. So similar to Kieth, Kiri still can take and have a human form, but can change to show her more Half-Galvranneo features. The chances of taking a full animal form is extremely low, since she's not a purebred like her father. When transformed, she still has mostly human skin, besides the fur on her ears and tail. Her nose is more feline, she has only one jeweled horn instead of three, and she has very thin layer of fur for markings on her face, similar to that shown above on the actual animal, going along her nose-bridge, to her eyebrows, and spanning along her forehead. Otherwise her eyes are slitted with the pupils, she has claw-nails, and fangs. (Purebread, humanoid formed Galvranneo have fur all over regardless, unless they're highly skilled on form changing and can take a human form completely, for example.) Galvranneo tails are weak points, so excessive squeezing, gripping, yanking, or being cut by anything can be very painful. Trying to rip the jewels off their head is also like trying to rip off a piece of their skull since its so well connected to the bone. They only naturally fall off when they chip them in fights, naturally shed them to grow new ones, or when they die. It may look like they have armored plating on the head/the markings where the jewels are and around their eyes, but its actually one large fur marking.

(In the case shown above, the half-human character was raised mostly, if not completely human most of her life. Having been sent to the Garrison for a chance at better life and education. The reasons to change could've been from training, extremely stressed moments from fighting or close to death experiences. Though this happens later during the end of season 2 and the beginning of 3, she changes due to fighting a certain prince in the gladiator ring. She's beaten, but the stress of having to fight for the Galra for entertainment for so long, and finally having a decent opponent to vent all that out on, well, she changes forms halfway through the battle. Both from that, and the fact that she unwillingly imprinted on him after drawing some of his blood and drawing out her form change in reaction. Kiri was found/captured at some point during seasons 1 and 2, and instead of killed she was one of the prisoners sent to fight in the ring at some attempt to 'earn freedom.' Not earning it until Lotor sees her potential, and not just the rarity of her species even if half-human. Funnily enough, he's really tall so compared to him she's a small, now partly feline and pissed 'pet.' Eventually goes with him, his generals, and comes back to the Voltron group at the end of season 4 when he arrives again.)

*Kiri can show a lot more emotions with the new appendages like her ears and tail, like with other animals. Tail can fluff up or be 'bent' in odd directions when face-faulting to show more comedy. When angry she pulls on her ears/One reason why they dont stand up as much as they should, she pulls them down to cover her face when flustered or upset or embaressed, etc. Can get a lot more creative with animal appendages and that's pretty fun :D

Galvranneo is a closed species, but ask or note me if you'd like to make one. For those that arent close friends of mine. Close friends, however, you can make one if you like to, just link or let me know so I can see :D

-NO FLAMING Kthnx :D
-No Base Used