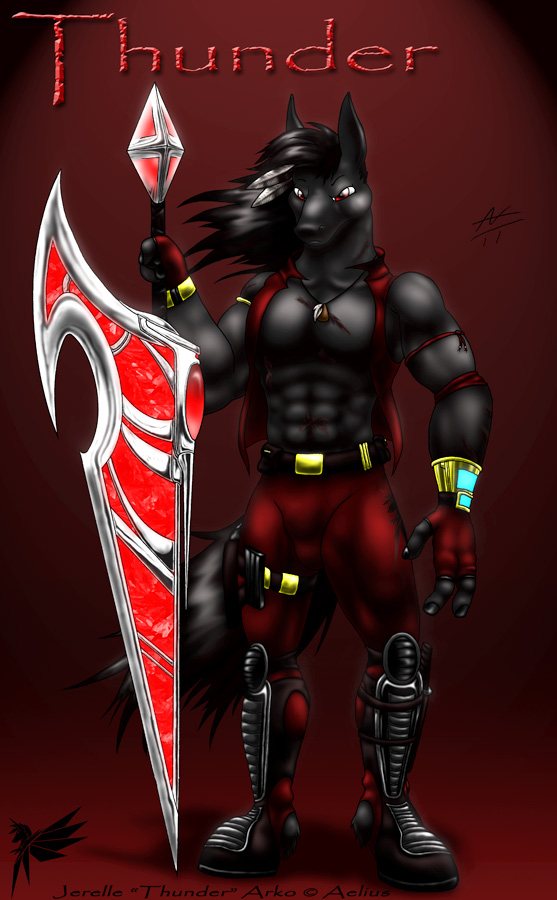 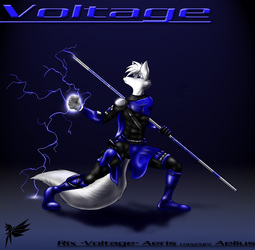 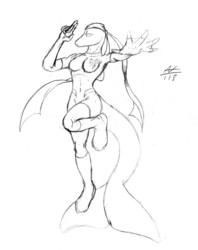 "I suppose anything can become a myth after enough years..."

Power: Can produce massive shockwaves. As a result, his body has toughened to become extraordinarily sturdy.

Physical Description: Male horse of tall stature and powerful build. Thick musculature implies a history of physical training. Black hair all over with feathering at hooves. Mane is long and wavy with moderately-long bangs that curve over one side of his head. Scars present on torso and arms. Irises are ruby-red as the result of a rare genetic quirk in his bloodline, but it does not affect his vision.

Personality: Jerelle is normally calm and collected, though he likes being in control of whatever situation he's in. If not, he tends to get impulsive. Friendly to those whom he believes have done nothing wrong, his attitude can change if one dares to rile his anger. While he isn't prone to hold grudges, he rarely forgets deeds done to him, good and bad, and is likely to adjust his attitude accordingly. He is extremely loyal to those he considers friends, and would do practically anything to ensure their well-being. He tends to see people more in terms of what they could become than what they are; because of this, he often tries to guide allies into seeing untapped potential within themselves. At the same time, this trait may also cause him to act against potential threats if he sees something bad in a person or situation. Through wisdom gained by a lifetime of spanning two different worlds, Jerelle can often see things in a different light than his contemporaries. While he does tend to see the "big picture" he refuses to believe that the ends justify the means when it comes to sentient life. Instead, he harbors a stubbornness and belief that nothing is set in stone, and with enough consideration, anything is possible no matter what the odds.

Background: Jerelle was raised by the Arko family, a group of falcons. During this time his Auran capabilities grew and strengthened. Along the way, he was also cared for by Dr. Gavas, a serval who would also become a close friend and confidant. Owing to his familiarity of battle and protection of society, he quickly enlisted in the military. There he would meet Syrani, who later became his wife.

Jerelle quickly rose through the ranks, impressing his superiors with his skill, determination, and wisdom. His Aura-attuned insight would eventually lead him to discover unrest growing between Raikonia and Malivia. He also suspected that the Narashaou were too familiar with Taekartan governmental procedures and knew ways of circumventing and delaying action. He began plans for a possible independent Special Forces group designed to counter these methods, but never told his superiors for fear of retribution or abuse of the concept. When Narashaou extremists attacked, he forced ahead his plans and assembled a covert-ops unit to strike back before official intervention could begin. The unit performed admirably, but his wife was killed during the fight, leaving him with an emotional scar not easily healed from.

Jerelle used the experience to remind himself what can happen when one rushes into something, and as a result, decided to step down from the front lines of his unit. It grew with other team leaders but no one ever went back to Malivia on mission. Instead, they limited their operations to Raikonia, working to help those whose governments had either abandoned them or abused them. While they met with moderate success, Jerelle began pouring over ancient texts regarding the Sages. Noticing frightening traits that the Narashaou had developed, he realized The Devourer might be returning. He spent most of his time alone, hoping to find hints of developing Auras around him. He had a feeling that mystical forces were at work, and his suspicions proved correct when he noticed Athena Khyran, Terarra Linding, and Rix Aeris all developing a sensitivity to them. Jerelle would soon include them among other individuals whom he would later request protection of by his unit. Most of them believed his claims, since they had seen his Aura at work during the first assault.

Sure enough, the Narashaou struck soon after but thanks to quick thinking, the individuals, later designated scions of the Aurans, would all survive. Jerelle soon found himself guiding them. He continually hopes that he can rectify the mistakes he made when his force was first organized, and help them become true Sages.

Weaknesses: Can be impulsive when he feels out of his element--his preference for being in control can sometimes cause him to take unnecessary risks.

The warhorse of the R-Force, and one badass stallion, Colonel Jerelle Arko. Thanks to his Aura, being 53 years old has not stopped him one bit and his talent proves it. The shockwaves he can produce are powerful enough to halt a freight train, and they've had the side-effect of toughening his body to where he can withstand small arms fire (to an extent). If you're curious as to the sheer destructive force he's capable of when focused enough, I direct your attention to the Mythbusters: http://www.youtube.com/watch?v=aSVfYwdGSsQ (start at 30 seconds and prepare for a hung jaw ;) ). The scars on his body show a lifetime of battle, but for the protection of innocent people, he considers them reminders of why he fights.