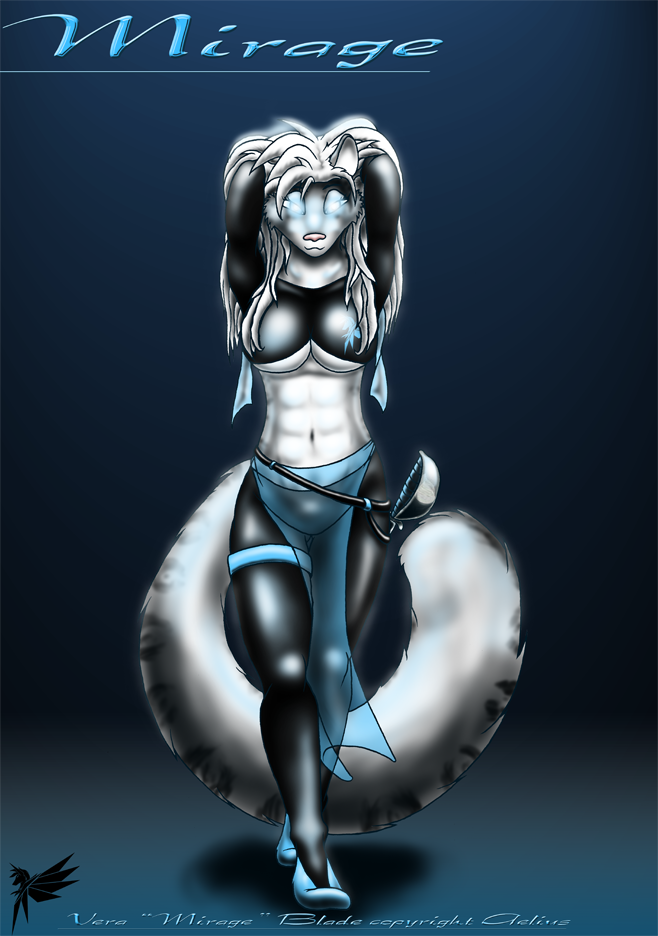 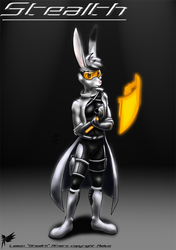 Power: Telekinesis, with minor telepathic abilities (can read minds and influence weak ones)

Physical Description: Toned, athletic build from a history of combat training and stunt performance. Hair is long, reaching mid-back. Body fur is trimmed shorter than most her species, both for comfort and aesthetics (though tail is kept thick and woolly).

Personality: Cool, calm, and collected. Vera rarely speaks unless something is worth saying, preferring to let her looks and actions speak instead. She gives off an air of mystery to those around her, as if there's more to her than simple appearances may suggest. This fits her attitude, as she likes being in control of whatever situation she's in and will constantly surprise her teammates even in the middle of a fight (provided she actually ends up in one; her preference for being in control means she's often sniping her opponents from afar or telekinetically attacking from a distance). She will not back down from a melee, but a hint of pride and vanity ensure she will end it quickly and on her own terms. She also considers the art of distraction to be just as effective a weapon as a gun or blade, and is deadly proficient in all three; she won't hesitate to show this off.

Background: Vera was born on the island of Terra Yu, yet was raised in a convent on Terra Kiresh as far back as she can remember; she never knew her parents, but given the lower-middle-class nature of the region she assumed she was the result of an unplanned pregnancy. Life in the convent was rather unremarkable for her; she had a notable rebellious streak and would often get into trouble with her caretakers and supervisors (on the occasions she actually got caught, that is, which were much fewer than any of them realized). She was nowhere near a "model nun" and cared little for the structured, organized life she felt forced into. Sneaking out at night quickly became a skill she was adept at (no easy task, given the number of nocturnal species present on the grounds). There was hardly anywhere to go without access to a boat (Terra Kiresh is a small island), but her wanderings did expose her to practitioners of martial arts. Through her own tenacity and desire for more action in her life, she developed an admirable proficiency in not only a melee combat art but a sword art as well.

Years later Vera would leave the convent for good, using her martial arts skill and proficiency for risks to inadvertently gain notice from an influential Narashaou Lord who soon offered her the position of bodyguard. Her previously-sheltered life had blinded her to the apartheid against the Ri'khana, her own race, but working under one of the ruling Malavites revealed to her the horrible things done against her kind.

She soon found a Resistance group united to end the Narashaou-dominated apartheid and, using her close ties to the Narashaou tribes, became a spy. At the same time, she knew this would also give her the chance to study a series of experiments that the Narashaou Lord had began prior to hiring her; the connection between the experiments and the awakening of her Auran power was too close to be coincidental. Other members of the Resistance cautioned her against delving too far, but her interest never waned.

Her continued work would lead her to meet Colonel Jerelle Arko during a trip to Raikonia with a few refugees, for the purpose of setting up a covert haven for new escapees from Malivia. Jerelle saw her as a vital agent in the war against the Dynasty and the two soon because trusted partners. Vera became the liaison between the Resistance and the R-Force, strengthening the latter's role in stopping Narashaou attacks on Raikonia. Vera later spent more of her time on Raikonia as the war between planets turned worse. Her interest in the Malavites' experiments continued to grow; far more than simple curiosity. She's seeking something...

Strengths: Experienced in the field; rarely loses her temper; insightful; deadly accurate with firearms; melee skill is admirable when confronted

Weaknesses: Prideful and vain; a bit of a control freak; often a loner

Shock Suit: Biomesh weave is slightly thinner than normal in order to enhance flexibility; armor can still repel small-arms fire and most melee weaponry. Micro-thermal upgrades and frictionless outer-fabric both help regulate body temperature. Refractive upgrade compliments this by decreasing heat signature with the added bonus of weakening directed-energy weaponry. Internal transmitter with bio-signature can wirelessly connect to sniper rifle to ensure no one else can use it but her.

Did I overdo the glows a little? :p

Alrighty, here's the R-Force's sultry sniper and espionage expert, Vera Blade. By the time you see her... she's already got you. I'm actually working on a revised image for her bio. I'll post the inks soon!